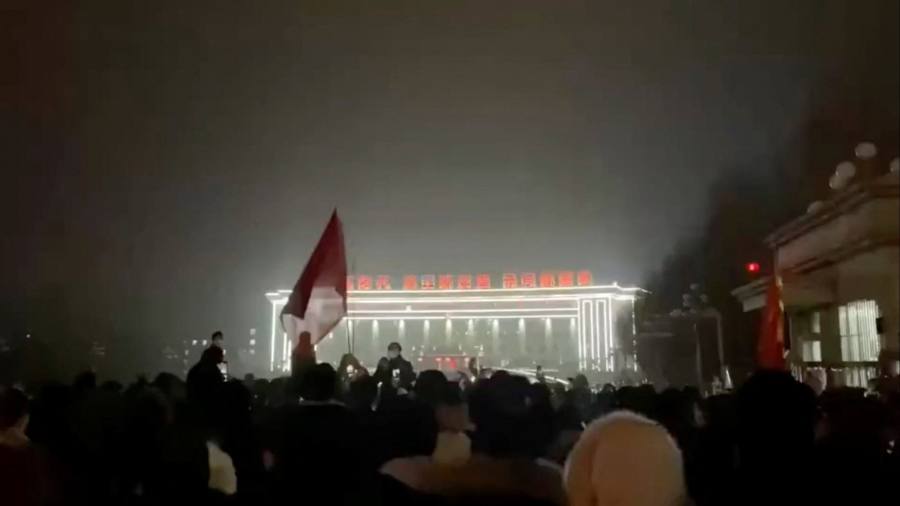 Scenes of protest from the locked-down western Chinese city of Urumqi have spread on social media after a fire killed 10 people, as nationwide unrest over the country’s strict Covid policies continues to build.

Social media posts alleged that restrictions in the capital of Xinjiang province, which has been locked down since August, hampered rescue efforts and the ability of residents to escape the fire in an apartment block on Thursday evening.

Unverified videos of protests in the city on Friday evening were widely circulated. Officials on Saturday denied some of the claims about the fire and said certain images online of locked doors were fake, China’s state media agency Xinhua reported.

The social media outrage over the incident in Urumqi reflects wider frustration in China over pandemic prevention measures that have largely kept the virus at bay for almost three years but are now under severe pressure.

President Xi Jinping’s zero-Covid approach is at a critical juncture with authorities continuing to impose harsh lockdowns, often inconsistently depending on the region, as daily case numbers rise to record highs and signs of discontent grow.

On Saturday, the country reported just under 32,000 new cases nationwide — the third consecutive daily record — and some of its biggest cities, including Beijing, Guangzhou and Chongqing, are recording their biggest outbreaks.

Earlier this month, protests erupted at an iPhone factory in Zhengzhou, which was fully locked down this week. Scenes of unrest in the manufacturing hub of Guangzhou, where authorities have closed down individual districts, have also been spread widely on social media.

In Urumqi, one resident, who declined to reveal his name, said he had been locked down at home for over three months but had joined a spontaneous protest alongside hundreds of other residents on Friday night.

“It’s OK to seal off the city, but it’s not OK to block the fire exit,” he said, referring to the allegations that the local government’s Covid restrictions had prevented residents from escaping the blaze. “We’re human beings, not animals.”

He added that he had been forced to borrow money from friends due to the lockdown and shared videos in which protesters chanted “Lift the lockdown”. Many of the videos of the protests in Urumqi were censored on WeChat.

Urumqi added 273 new high-risk areas for the spread of coronavirus on Saturday. The Xinhua story acknowledged issues with access to the fire because of parked cars and said there would be an investigation into the incident.

Beijing is under its most severe restrictions since the virus first emerged, but has stopped short of a full citywide lockdown of the kind imposed on Shanghai in spring this year.

Freedom House, a pro-democracy organisation based in Washington DC, said it had recorded dozens of Covid-related protests over recent months.

Xinran Andy Chen, an analyst at China consultancy Trivium, argued that the “frustrations, fatigue and complaints” against zero-Covid are “definitely there and growing”, but argued that it is “not anywhere near a tipping point yet”.