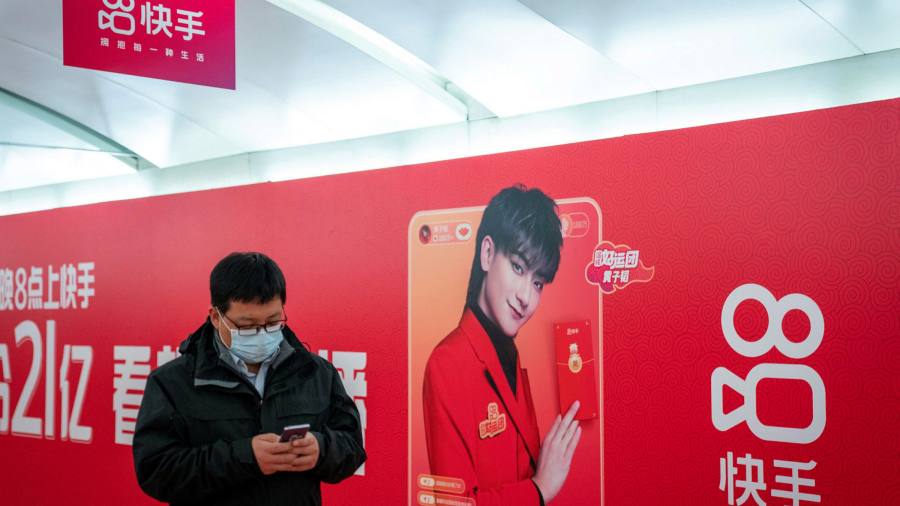 Sign up to myFT Daily Digest to be the first to know about Beijing Kuaishou Technology news.

Kuaishou shares fell more than 12 per cent on Thursday after the short-video platform and TikTok rival reported weaker than expected second-quarter earnings, dragging other China tech shares lower and ending three days of gains for the sector.

Hong Kong’s Hang Seng Tech index, which tracks big ecommerce and internet companies including Alibaba and Tencent, dropped as much as 2.3 per cent after rising more than 9 per cent over the previous three sessions.

Investors had tentatively resumed buying stocks that had been hit by a wide-ranging regulatory crackdown, which has erased hundreds of billions of dollars from the stock market capitalisation of some of China’s most valuable companies. The Hang Seng Tech index is down more than one-quarter this year.

Kuaishou’s shares are down 83 per cent from a peak in February, shortly after the company’s initial public offering in Hong Kong.

Analysts were sanguine about the company’s prospects, with Jefferies maintaining a price target of HK$137, compared with the low of HK$67.80 the stock touched on Thursday. Thomas Chong, an analyst at Jefferies, said Kuaishou was “in the sweet spot of content consumption evolution”.

But the drop of as much as 12.5 per cent for Kuaishou shares spooked investors, helping scupper signs of a recovery that had been building for much of the week.

Gains for Chinese tech stocks earlier this week had followed strong results from ecommerce groups JD.com and Pinduoduo. The latter’s stock is down 50 per cent from its peak in February but shares jumped 22 per cent on Wednesday after the company reported its first quarterly profit since its US IPO three years ago.

Louis Tse, managing director of Wealthy Securities, a Hong Kong-based brokerage, said the rally in Chinese tech stocks had received a significant boost when Cathie Wood’s Ark Investment Management disclosed it had bought shares in JD.com this week. But he added that the move would not sustain buying in the long term because of fears of further regulatory action.

“The market doesn’t have that much confidence in the rebound,” Tse said. “And you don’t know when the next rebound will be. If you cut your losses at this level, you can still make a profit if you bought much earlier.”