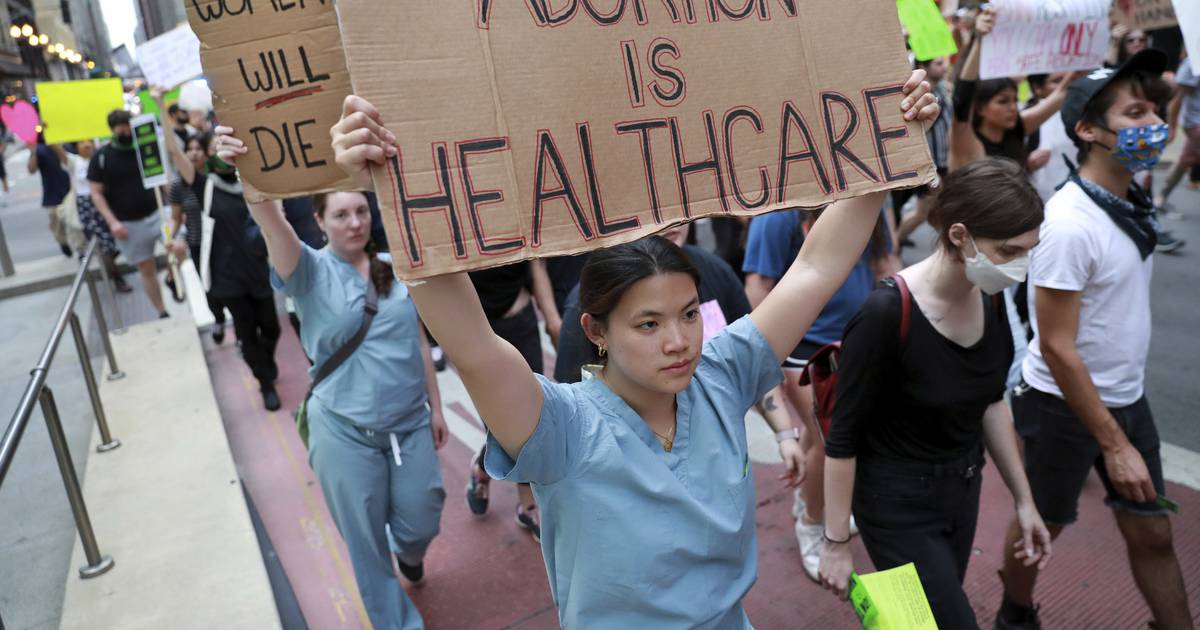 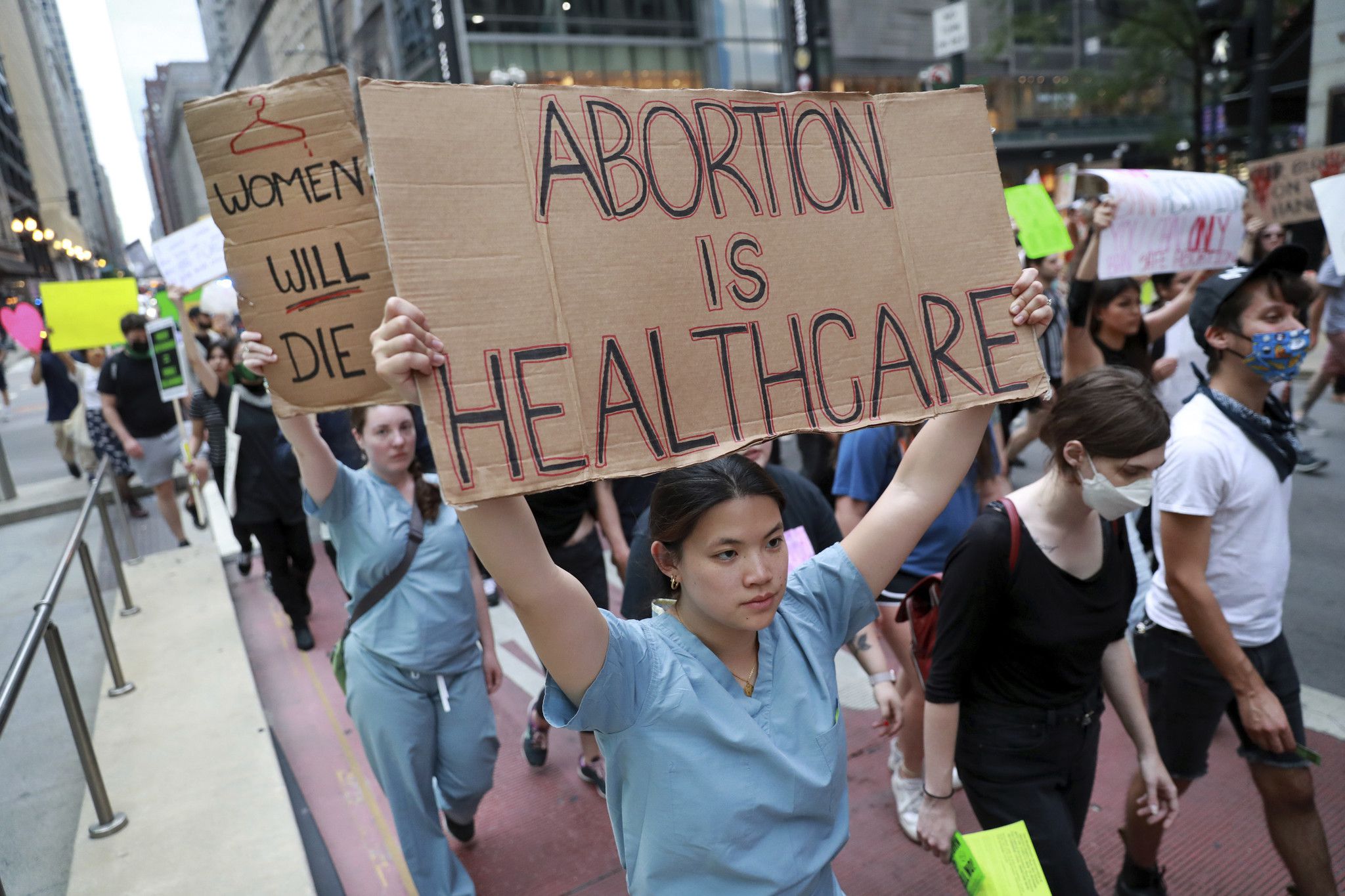 One day after the historic ruling by the U.S. Supreme Court removed the national protection for abortion, hundreds of pro-choice supporters again took the streets in Chicago to express their rage and sadness about the ruling while also vowing to never give up the fight for abortion rights.

Groups throughout the day Saturday gathered at Federal Plaza and marched through downtown streets, chanting and holding up signs that read, “Forced motherhood = female enslavement” and, in Spanish, “¡Aborto a solicitud y sin pedir disculpas!” meaning, “Abortion on demand and without apology!”

Patricia Willin, from El Salvador, said pro-choice allies can learn from protesters in Latin American countries who in recent years have taken to the streets and demanded decriminalization of abortion.

Many protesters wore green, a color that in Latin American movements represents the right to legal abortions, Willin said.

“We take inspiration for our sisters in Latin America, by showing up and telling everyone that this is how we feel and we’re not gonna take their laws that they’re trying to implement,” Willin said. “That we’re not OK with having human rights taken away from women.”

Mari Garcia has been to every protest she could attend since former President Donald Trump was elected in 2016. The young Afro-Latinx said they feel less alone when they protest.

“It’s definitely a way that it helps me cope, to see that there are other people out there that actually care, you know, and want the same things that I do,” they said.

They said it’s important for people in marginalized groups to speak up and show up to protest.

“Honestly, it’s gonna affect us first,” Garcia said. “A lot of these laws and bans are affecting all of those marginalized communities first, and honestly, if we’re not going to fight for our rights, or we’re not going to do anything about it, no one really will.”

Illinois Lt. Gov. Juliana Stratton said it’s important to recognize the power of people coming together to fight back “peacefully.” She said she attended the protest not just as an elected official but as a Black woman and mother to four Black daughters who deserve more rights, not fewer.

“It’s important to understand that Black women and other people of color and poor women and immigrant women and disabled women and trans and nonbinary people will suffer the most in this post-Roe world, and it’s these voices that we must prioritize and uplift in the fight ahead,” Stratton said.

Abortions are still legal and available in Illinois, Stratton said, because “reproductive freedoms (are) enshrined into state law.” But, she added, abortion rights will be a major issue in the coming midterm elections in races “up and down the ballot.”

As protesters rallied, researchers who have studied the effects of access to reproductive care say they’re worried the decision will create even greater barriers for youths and marginalized members of society who are forced to travel to access abortion care.

Amy Krauss, who has researched reproductive rights in Latin America and studied institutional inequality after Mexico City legalized abortion while other Mexican states further criminalized it, said she expects states to intensify their laws in the wake of Roe v. Wade being overturned. She said that’s already started to happen.

Krauss, who taught gender, sexuality and human rights at the Pozen Family Center for Human Rights at the University of Chicago, said restrictive laws will burden people disproportionately based on race, class, and immigration status.

While states with already restrictive laws will continue to make abortion access nearly impossible, Krauss said she expects states such as Illinois and California to increase access.

In her research about Mexico, Krauss said people traveled to Mexico City for safe and legal abortions. She said health care systems were overburdened, which led to practices that were not ideal and affected marginalized groups disproportionately.

She worries something similar could happen in the U.S. as those seeking abortion cross state lines.

“I think we also need to have in mind models of care that affirm people’s dignity in the situation of abortion, and make sure that moral stigma doesn’t affect people’s experiences,” Krauss said. “Because as criminalization gets more intense alongside these pockets, where the right is protected, and where it’s legalized, people who are traveling between these different spaces are then kind of carrying a lot of moral weight and pressure.”

Krauss has also seen feminist and reproductive rights movements strengthen and organize networks of care in the wake of abortion criminalization. More recently, that has looked like circulating abortion pills to people who don’t have the means to travel across state lines.

Those networks have also existed in the U.S. before and during Roe and she hopes they will continue to exist and strengthen, she said.

Lee Hasselbacher, interim executive director of the Center for Interdisciplinary Inquiry and Innovation in Sexual and Reproductive Health, or Ci3, is worried about the added barriers young people will face in seeking safe abortions.

“It’s something that I think a lot of people who are working in this field have been expecting for a while,” Hasselbacher said after the Roe draft opinion was leaked.

Hasselbacher works with researchers on policy reform covering access to contraception and abortion, consent and confidentiality for young people, among other research topics surrounding youth and health care. Ci3 focuses on research to better understand adolescent sexual and reproductive health.

But while youth in states with more restrictive abortion laws will be allowed to seek care in Illinois, traveling across state lines can be difficult for youth making abortion access even more limited if surrounding states pass total abortion bans, Hasselbacher said.