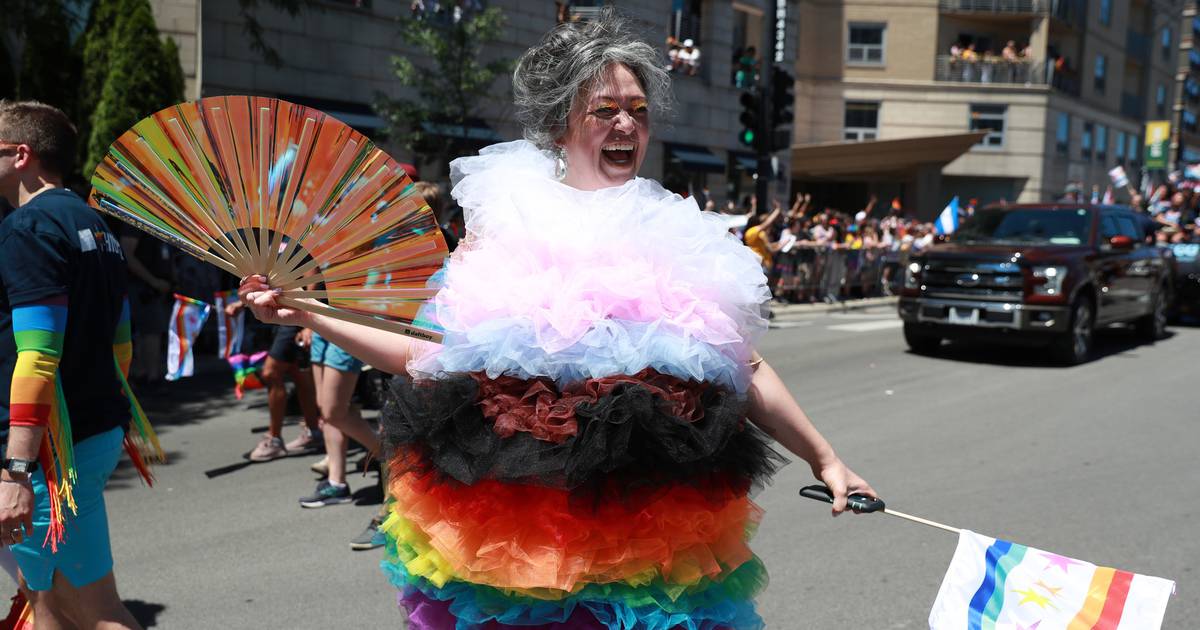 With rainbow flags adorning the streets around Montrose Avenue and Broadway Street and rainbow-clad people staking claims to sidewalk spots near colorful floats, it became official: The annual Chicago Pride Parade was back.

The parade was canceled the past two years due to COVID-19 restrictions. But at noon Sunday it returned, stepping off in the Uptown neighborhood and ending at the corner of Diversey Parkway and Sheridan Road in Lincoln Park, traversing its traditional route along Broadway and Halsted Street.

“People keep telling me how excited they are,” Tim Frye, the parade’s organizer, said in an interview with the Tribune before the parade. “After a while you say, ‘Yes, they’re just being nice’ — but I don’t think that anymore. I think it’s a very real thing,”

Along the parade route, numerous vendors sold rainbow flags, souvenirs, food, and other refreshments, while cafes and restaurants filled up with parade-goers seeking refreshments.

Organized Chaos, a women’s motorcycle group based in Chicago, was among the groups showcased in the parade. Kala Cullaras, 32, a member, was most excited for the “energy” and “liveliness” of the parade. For Cullaras, celebrating Pride is one of the few spaces where one can “truly express (their) authentic self and be who (they) really were intended to be as opposed to trying to fit into a very monotone world.”

“It’s always so moving and touching,” she said. “I end up in tears usually, because it’s such a momentous occasion that we get to embrace this brave space in spite of everything happening around us, that we’re still here and vibrant and just a colorful as usual, and not being muted or suppressed or anything. We are who we are.”

Parade-goers reflected on the political moment during which the parade was taking place this year, as the country continues to react to a Supreme Court decision Friday overturning abortion rights granted in Roe v. Wade and as concerns mount over the future of other rights that could challenged, including those impacting the LGBTQ+ community.

Messages such as “Trans Lives Matter” and “Black Lives Matter” appeared across floats, in front of businesses, and in the crowd. “Fight like it’s 1969,” a sign from one spectator read, retracing the origins of the Pride Parade to the Stonewall Riots in 1969.

Some held signs that read “Abort the court” on one side and “Protect Griswold, Lawrence, Obergefell” on the other, referencing three cases that Justice Clarence Thomas argued the Supreme Court “should reconsider” in his concurring opinion overturning Roe v. Wade. The three cases currently protect rights to contraception, same-sex intercourse, and same-sex marriage.

Garrett Credi, 20, who was celebrating pride with his boyfriend and friends, expressed hope that parade-goers be able to find joy in pride despite heightened tensions and anxieties due to the Roe v. Wade overturning.

“I’m not somebody with a uterus so I can just (come) out here and celebrate,” Credi said. “But there are people that are having to deal with the reality that their bodies aren’t going to be controlled by themselves anymore, so having that in the context, it’s going to be a different Pride. I don’t know how that’s going to turn out, but hopefully it will turn out for a way for people to feel like they have agency and some way to have fun at a time like this.”

Sunday’s parade is the first organized by Frye, of PRIDEChicago. Since 1974, the parade had been organized by Frye’s husband, Richard Pfeiffer, who died of cancer in October 2019 at 70. The 2022 parade is being held in Pfeiffer’s honor.

“One of the things that has always been my goal and it was Richard’s too, was that as far as I was concerned, the parade was a rousing success if one person in the crowd suddenly said, ‘Look at that. I think I can have a happy life. I’m OK after all.’ One person. That’s it — I’m a very happy person,” Frye said.

Credi described Pride as an occasion in which he can fully embrace his identity and his relationship.

“Pride is a moment where I don’t have to be afraid of being who I am, of loving my boyfriend,” he said. “There are times when we’re walking around, even … back in our college campus, we’re afraid to just hold hands or even just show affection. And (during Pride) we just know we can be who we are and that is something that we need.”

The parade kickoff was headed by the Chicago Police Department and included a banner marking “Chicago’s 51st Annual Pride Parade.”

An early appearance by Mayor Lori Lightfoot and her wife Amy Eshleman, sparked a wave of voices calling out “Lori” as the couple passed.

The first part of the parade featured numerous LGBTQ+ interest groups like the Chicago Gender Society, LGBT Veterans, the Chicago LGBT Hall of Fame, and the Chicago Lakeside Pride Music, which broke its rigid band formations for a brief dance routine that won over cheers from the crowd.

In Lakeview late Sunday morning, streets filled up with people wearing rainbow apparel, holding hands and trying to fan themselves with the pride flags they bought on street corners. The sun was out in full force. Brianna Griffin, who traveled from Aurora, spoke to what pride means to her.

”I’m very colorful, you know, and I had to hide that a lot,” she gestured to her all-pink outfit with a pride flag. “So being here, seeing everyone be themselves, it (means) a lot.”

Eduardo Alvarez, 30, and David Dominguez, 29, watched the parade from near its kickoff, eagerly awaiting their friends’ appearance in the Asian Alliance float and celebrating what pride means to them.

”Pride is always looking at the sun, instead of the darkness,” Alvarez said. “We keep it positive. I know life is full of ups and downs, but we just move forward and just make the world happy,” Alvarez said.

Check back for updated coverage.

Pipette favorites at 40% off!