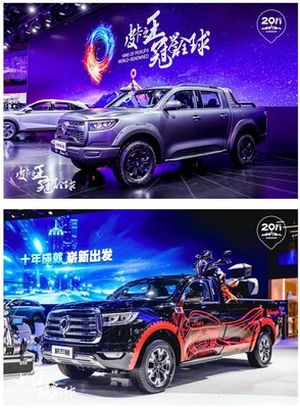 On August 29, several new models of GWM POER made their debut and the key of the 200,000th GWM POER was handed over to the user at the 24th Chengdu Motor Show.

The ZHUFENG version inherits the leading strength of GWM POER off-road pickups and is equipped with a 2.0T engine and an 8AT transmission to further strengthen its off-road capability; different driving modes are available for easy driving on hump-shaped, water-flooded and snake-shaped roads, paying tribute to the climbing spirit with sound performance; in the shock absorber structure, the front double-wishbone independent suspension and the rear multi-link suspension are used to ensure performance and comfort.

JICHE POER, a partner of motorbike riders, has a large cargo box of 2480/1520/538mm, which is equipped with a high-strength ladder chassis and a super load-bearing suspension to support the loading of a 2m- to 2.4m-long motorbike, equivalent to a super loading capacity of up to 400kg. Meanwhile, the easy-to-operate box can be dragged with a remote control winch, so a user can glide the motorbike onto the box alone. This easily solves the difficulties of motorbike riders while going out and promotes the development of motorbike culture.

Over two years, GWM POER has seized market share with strong product strength and intelligent configuration, with global sales of 200,000 units. From January to August 2021, 77,356 GWM POER were sold worldwide, up 13.4% year on year, becoming a hot-selling “new category” in the global pickup market.

In Chile, GWM POER kept increasing the sales volume of GWM pickups. After becoming the champion among the Chinese pickup brands in June, it reached a new high in July and won first place among international and domestic pickup brands.

In Saudi Arabia, GWM POER and GWM Wingle, as high-end and low-end pickups, effectively promoted GWM pickups to rank among the top three in local industry sales for two consecutive months, and to surpass some Japanese pickup brands. The market share increased steadily to 11%, ranking first among Chinese pickup brands.

Since its launch in 2019, GWM POER has reached more than 50 countries and regions like Australia, Chile, South Africa, Iraq, Egypt, Jordan and Russia, and recently entered emerging markets like Peru and Ecuador. Its globalization pattern has been expanding.

On September 16, 2021, Dometic entered into an agreement to acquire Cadac International – a provider of premium barbecues and accessories to the vehicle based outdoor market.    more >>

Hyundai Motor Group and LG Energy Solution break a ground an EV battery cell plant in Karawang, near the Indonesian capital, Jakarta    The plant to begin production in 2024 with an annual capacity of 10-GWh worth of battery cells, enough for over 150,000 E-GMP battery electric vehicles     more >>

Change at the helm of Porsche MotorsportThomas Laudenbach (53) will assume the role of managing Porsche Motorsport on October 1, 2021. The accomplished German engineer takes over from Fritz Enzinger (65), who has led the racing department of the sports ca more >>

Toyota amplifies RAV4’s authentic SUV qualities with the addition of the new RAV4 ADVENTURE to the RAV4 range.


Get Ready For The Ford Next-Gen Ranger!

The first official glimpse of the #NextGenRanger, which will be revealed later this year and launched in 2022.Embracing superior off-road credentials and Ford’s dynamic driving DNA, the toughest, most capable and connected Ranger pick-up yet more >>

New figures released today by the Finance & Leasing Association (FLA) show that the consumer car finance market reported a fall in new business volumes of 20% in July 2021 compared with the same month in 2020. In the first seven months of 2021, new business volumes were 20% higher than in the same period in 2020.The consumer new car finance mar more >>


CUPRA opens a new Garage at the heart of Milan

Just hours after the inauguration of the City Garage in Munich, CUPRA launches another unique space in the center of Italy’s capital of fashion    The brand’s objective is to build a solid network of CUPRA Garages worldwide. Madrid, Rotterdam, Lisbon and Berlin will follow soon    CUPRA cont more >>

Following the news that automaker Ford announced to shut down both its vehicle manufacturing factories in India; Bakar Sadik Agwan, Senior Automotive Consulting Analyst at GlobalData, a leading data and analytics company, offers his view:  more >>


Opel Manta GSe ElektroMOD: The Dream, the Team, the Technology

For the love of cars: Opel employees design and develop emissions-free neo-classic    From the Classic collection: Manta A parts-platform is brought back to live    Best ingredients: Electric and digital, like current Opel models    From experience: Rear-wheel drive combined with ma more >>

Following the news that Honda Cars India Limited (HCIL) is developing an India-centric SUV  Bakar Sadik Agwan, Senior Automotive Consulting Analyst at GlobalData, a leading data and analytics company, offers his view: “With the announcement of a more >>

Tesla had highlighted last month that a major blockade for sales in India is high import duties. Vehicle imports of all categories, including electric vehicles (EVs) attract 60% import duty for vehicles under US$40,000 and 100% for vehicles above it, which is highest in the world. more >>

A design and technology benchmark for modern super sports cars, reimagined for a new era: Our legacy to the future    A celebration of the Countach’s 50th anniversary, the Countach LPI 800-4 is unveiled at The Quail: A Motorsports G more >>

Entering the final year of production, the 2022 Ford GT Heritage Edition supercar pays homage to the 1964 Ford GT prototypes that led to America’s only Le Mans®-winning supercar, with wins from 1966 to 1969, and again in 2016
more >>

Three million Mercedes-Benz passenger cars produced in 2016 or later can receive even more informationLarge potholes are a safety hazard, because if drivers do not recognise them in time, they can no longer take evasive action or more >>

Sports Car Market has named its top “40 Under 40” for 2021. This is the second time the magazine has recognized 40 car enthusiasts under 40 years old who are leaders in the collector-car world. more >>

US Absent as World Joins Together to Protect Biodiversity

US Absent as World Joins Together to Protect Biodiversity

Brain: Your unique pattern of neural activity spotted in 100 seconds