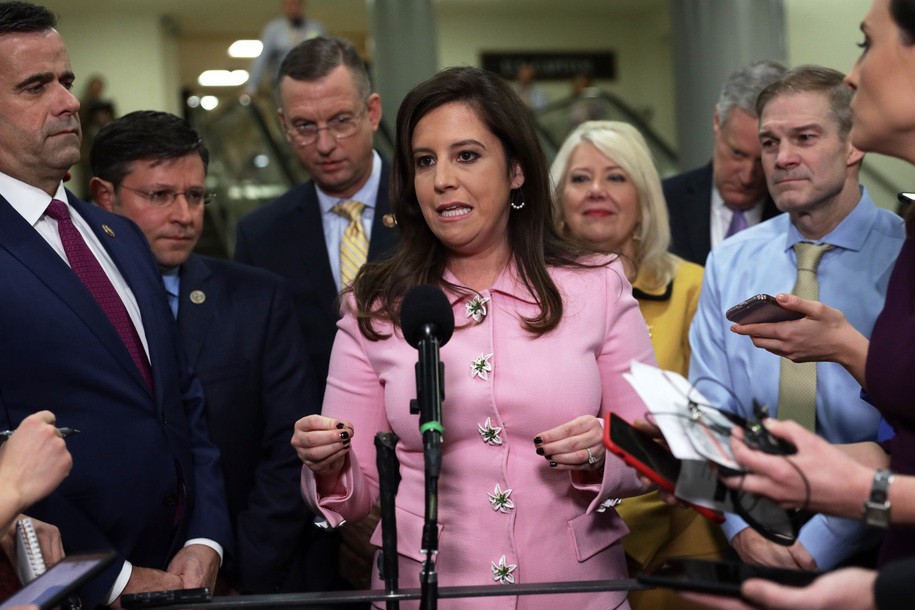 Cheney is defiant, on Wednesday evening publishing a Washington Post op-ed defending her position and calling out McCarthy for having changed his. McCarthy, she accurately charged, has “changed his story” from his Jan. 13 statement that “The president bears responsibility for Wednesday’s attack on Congress by mob rioters. He should have immediately denounced the mob when he saw what was unfolding.”

“The Republican Party is at a turning point, and Republicans must decide whether we are going to choose truth and fidelity to the Constitution,” she wrote, going on to call for Republicans to support criminal investigations of the Capitol insurrection, support a bipartisan January 6 commission with subpoena power, and “stand for genuinely conservative principles, and steer away from the dangerous and anti-democratic Trump cult of personality.”

Most Republican lawmakers, of course, will do nothing of the sort. Instead, Cheney’s House colleagues are set to vote her out next week, replacing her with Stefanik, who was elected as something of a moderate and has a much less conservative lifetime voting record than Cheney. The Club for Growth is not happy about that—though it also doesn’t seem to be defending Cheney—tweeting “Elise Stefanik is NOT a good spokesperson for the House Republican Conference. She is a liberal with a 35% CFGF lifetime rating, 4th worst in the House GOP. House Republicans should find a conservative to lead messaging and win back the House Majority.”

Back in 2017, Stefanik opposed Trump on key issues, like his withdrawal from the Paris climate accord, and voted against the tax law that was the major Republican legislative achievement of the Trump years. In late 2018, she took criticism from male Republicans for trying to help Republican women win primaries. But in 2019, she became one of Trump’s fiercest defenders during his first impeachment. It appears she had realized what would be her quickest path to leadership, and she has continued to remake herself in the Trumpy style, down to the LOTS OF CAPS in a Thursday morning tweet assailing Twitter, a private business, for “unconstitutional overreach” in having suspended her communications director.

To be clear, this is not a fight with a hero and a villain. It’s a fight between someone whose principles are largely punitive far-right ones that do include a basic respect for the democratic process and someone who apparently has no strong principles beyond her own advancement—if being a non-Trumpy Republican looks like the way to go, she’s that, and if Trump looks like the winning horse, she’s riding him. One of them is concerned that “History is watching. Our children are watching”—but is looking to create a Republican Party that is strong enough, in the long term, to hand over the maximum amount of power to the biggest corporations and promote endless war. The other is much less worried about history or policy than about getting the immediate promotion, thankyouverymuch. And today’s Republican Party is with the latter, less tied to any specific principle than to Trump—at least as long as he’s got the biggest megaphone and the most committed base—and definitely willing to jettison little things like election results or any pretense of non-racism to keep the Trump base motivated.