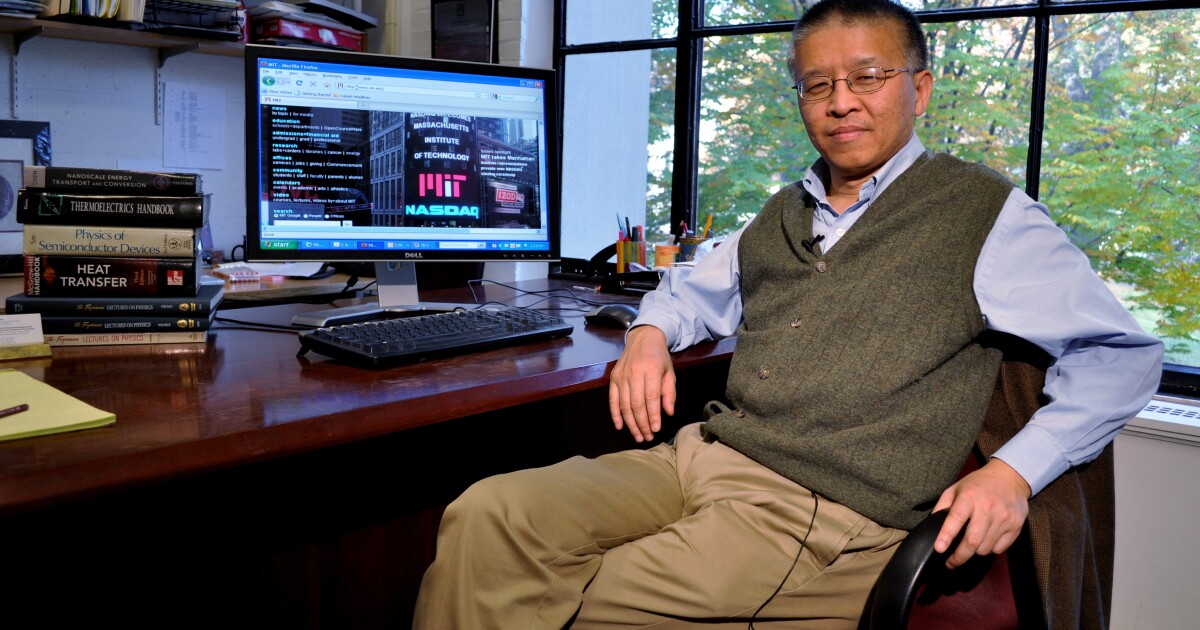 The arrest and charging of a prominent Massachusetts Institute of Technology professor for allegedly concealing his affiliations with China is underscoring the tensions inherent in the increasingly global nature of university research — particularly when it involves China.

In recent decades, institutions like MIT have set their sights across borders, striking ambitious academic partnerships and finding financial support for their research around the globe. But that strategy of international engagement is under strain as relations between the United States and China have entered a new, more conflicted era. Research and innovation, prized by both nations in today’s knowledge economy, are at the center of that clash.

Professors are pushing back, saying that federal prosecutions of Gang Chen, a professor of mechanical engineering, and other researchers could chill collaborative partnerships and hurt American science and education. Some 200 of Chen’s MIT colleagues signed a letter in his support, and similar petitions are circulating on other campuses.

The charges against Chen, the professors wrote in the letter to L. Rafael Reif, MIT’s president, are “a complaint against all of us and an affront to any citizen who values science and the scientific enterprise.” Many of the activities he is accused of are part of the routine work of a faculty member and not clearly subject to disclosure, such as writing recommendations and sitting on grant-review committees.

They concluded: “We are all Gang Chen.”

In the initial complaint, filed on January 13, prosecutors accused Chen, who is a specialist in nanoscale heat-conduction physics, of accepting $19 million in U.S. grants since 2013, while simultaneously receiving $29 million in foreign funding, including $19 million from a research university funded by the Chinese government. But MIT has said that the Chinese funds were paid to the university as part of a collaboration with Southern University of Science and Technology, in Shenzhen. Chen was the inaugural director of a joint mechanical-engineering research institute.

The Chinese funds were not mentioned in the indictment filed several days later. Instead, Chen was charged with failing to disclose several Chinese affiliations, such as serving as a “review expert” for the National Natural Science Foundation of China, when applying for federal grants. Prosecutors also said Chen did not report a Chinese bank account worth more than $10,000 on his 2018 tax filings.

Chen has pleaded not guilty, and MIT is paying his legal fees. It’s a marked contrast to the case of Charles M. Lieber, a Harvard University chemistry professor who was similarly charged with concealing research funds he received from China; Lieber is suing Harvard, saying the university failed to uphold its contractual obligations by not contributing to his legal defense.

The research center Chen led is just one of many joint MIT projects around the globe, part of a bold strategy of international engagement, with research at its core. MIT has helped establish research universities in Russia and Abu Dhabi, and its faculty members have studied traffic in Singapore, advanced manufacturing in Portugal, and renewable energy in the Middle East.

Inevitably, these kind of things will have a chilling effect on international collaboration.

Many of the most interesting and pressing research areas, such as climate change, are not confined by national borders, said Richard K. Lester, the associate provost who oversees MIT’s international activities, and talented scientists are all around the world.

For American institutions, international collaboration also offers a new source of funds, especially as U.S. government support for research has been largely flat.

Even before the Chen case, however, MIT’s overseas work has gotten it caught up in geopolitics. In 2018, the university came under scrutiny for $7.2 million in partnerships and contracts with Saudi Arabia, following the killing of Jamal Khashoggi, a prominent dissident. His murder was believed to have been ordered by the Saudi crown prince, who had visited MIT earlier that year. (In a review, MIT criticized Saudi Arabia for its abuses but maintained its ties with the kingdom.)

MIT is also one of at least 20 colleges under investigation by the U.S. Department of Education under the Trump administration for their reporting of foreign funds. The inquiry demanded the universities disclose details of gifts, contracts, and other connections with a number of countries, including China, Qatar, Russia, and Saudi Arabia.

Still, in recent years, nowhere has the spotlight glared as brightly as on higher ed’s connections with China. The U.S. Department of Justice started its China Initiative in 2019 with the goal of “disrupting and deterring” national-security threats from China in business, trade, academe, and elsewhere.

As of November 2020, the department had brought at least 10 cases against American academics and researchers, with three convictions, as well as six against visiting Chinese scholars. Many of the researchers charged are, like Chen, naturalized citizens born in China.

In addition to the Chen case, a former University of Florida professor was charged on Wednesday with defrauding the U.S. government by taking $1.75 million in federal grants while allegedly hiding support he received from the Chinese government, as well as from a Chinese company he founded to profit from that research.

In an interview with The Harvard Crimson, Andrew E. Lelling, the U.S. attorney for the District of Massachusetts, who brought the Chen and Lieber cases, said the goal of the prosecutions was not to cut off research ties with China but to “sensitize” both universities and the general public to the risks of intellectual-property theft by the Chinese government.

“Collaboration with foreign researchers is like the lifeblood of the scientific community — no one is saying don’t do it,” Lelling told the Crimson. “Equally importantly, don’t lie about it, don’t hide it. Catalog it, be forthcoming about it on the appropriate forms.”

But the investigations have had a chilling effect, many in higher education said. Peter T.C. So, a professor of biological and mechanical engineering at MIT, said one of his top students, set to graduate in May, has already ruled out staying in the United States for postdoctoral work and is instead looking for positions in Europe or back home in China. It’s not just the prosecution of researchers that takes a toll, but other recent U.S. actions against China, such as tighter visa restrictions on Chinese graduate students.

“That’s very different from my generation,” said So, who was born in Hong Kong and is educated in America. “I don’t think people feel safe at the moment, that’s what students are thinking.”

Yoel Fink, a professor of materials science who spearheaded the faculty letter at MIT, compares American higher education to the NBA, made that much richer by recruiting the best from around the world. He dismisses government suggestions that universities are a source of vulnerability, pointing out that the research done at MIT and other campuses is meant to be shared. “In sports as in science, there are no secrets,” Fink said, “just ultimate, fierce competition.”

Caroline S. Wagner, an associate professor of international affairs at Ohio State University, said her research shows that countries that are more open to international collaboration have stronger science. The United States in particular has benefited from being open to innovation, she said. “That’s been our way, and we don’t want to retreat from what’s made us so successful.”

Five years ago, Xi Xiaoxing, a professor of physics at Temple University, found himself in much the same situation as Gang Chen, charged with having secret ties to China. He was arrested in front of his family and found himself in legal and professional limbo for months before the U.S. government dropped the charges against him. Officials had fundamentally misunderstood the nature of Xi’s research.

Xi is back at work now, but he is loathe to apply for the federal grants that are the lifeblood of basic scientific research, fearful that he could once again be caught in the dragnet over China ties. “My research program these days is much smaller than it used to be,” he said, “because I’m scared.”

Xi’s arrest predates the China Initiative, but one reason critics take issue with the Trump-era program is that it has used the criminal-justice system to deal with foreign-funding disclosure. The criminal complaint against Chen does not allege that he disclosed any sensitive information.

Even if Chen is guilty of the charges, should he face up 20 years in prison, and fines of up to $250,000, for failing to meet reporting requirements? Maggie Lewis, a professor of law at Seton Hall University whose focus is on China and Taiwan, said there are other ways to penalize scientists — leveling fines, even barring them from applying from government grants in serious cases of misconduct — at both a university and funding-agency level.

“I worry about the criminalization of research-compliance failures,” Lewis said.

I don’t think people feel safe at the moment, that’s what students are thinking.

The Wall Street Journal has reported that the Justice Department is considering an “amnesty” program that would allow researchers to amend past foreign-funding disclosures without penalty. And the fate of the China Initiative under the new Biden administration is unclear. In a speech on Thursday, President Biden said he would “push back” on China’s threat to intellectual property.

Meanwhile, the recently passed National Defense Authorization Act includes language requiring all applicants for federal grants to “disclose the amount, type, and source” of their current funding. The effort to put in place consistent and clear disclosure policies across federal agencies, rather than a hodgepodge of differing rules, has been generally supported by higher-ed groups.

Within universities, there is an acknowledgement that their own institutional standards for conflicts of interest and disclosure were not always adequate. Many colleges have revamped their policies around outside contracts and conflicts.

MIT, too, has worked to improve its disclosure and has put in place new processes for vetting for international partnerships, reviewing them for risks related to national security, economic competition, and civil and human rights. Projects in three countries, China, Russia, and Saudi Arabia, are flagged for extra scrutiny by a small group of senior administrators.

Still, the question remains: Did MIT’s willingness to forge partnerships in places like China put Chen, and the institution, in the U.S. government’s cross-hairs?

Lester, the associate provost, acknowledges that it has become tougher for universities to work internationally. “Inevitably, these kind of things will have a chilling effect on international collaboration,” he said of the Chen case. “The chilling effect would be of less concern if not for the fact that we believe that international engagement is even more important than it was before.”

MIT can chart its own course, but it can’t set national policy, Lester said. Educators and policy makers must resolve a “fundamental” question, he said: Whether American colleges should continue to work with China.