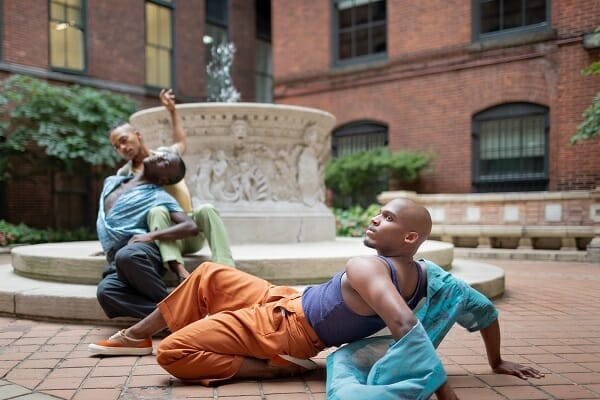 The notion that love can ignite change, empowerment and healing is the celebrated center of choreographer Kyle Abraham’s An Untitled Love, at the Rialto Center for the Arts on May 21. The work, performed by his company A.I.M. (Abraham in Motion), is a dance theater “mixed tape” indulging in Black love and joy through its characters and movement while R&B legend D’Angelo’s music paints a soulful backdrop.

“Bring your unapologetic best self to the show,” says Abraham to potential audiences. “You can laugh out loud at the work. If your song comes on, you can say, ‘Oh, that’s my song.’ It’s a lived work and I want people to live in it as they witness it.” Abraham first fell for the neo-soul singer’s debut album Brown Sugar during his time at Morgan State University in Baltimore.

Abraham is an award-winning choreographer and 2013 MacArthur fellow. He’s presented work throughout the United States and internationally, and has been commissioned by the Alvin Ailey American Dance Theater, the Royal Ballet, the New York City Ballet and Paul Taylor American Modern Dance. In 2019, Abraham created a solo work for American Ballet Theatre principal dancer Misty Copeland titled Ash and was commended by The New York Times for his skill at mingling ballet vernacular with African diasporic forms.

In the past, many of his dances have resonated at the crossroads of identity and history and addressed civil rights, police brutality and the impact of domestic and gang violence in Black communities. An Untitled Love by comparison is a jubilant exaltation of loving oneself and allowing that love to grow and thrive as it ripples out into the community.

The piece borrows its name from D’Angelo’s Grammy-award winning track Untitled (How Does It Feel). Illustrator Joe Buckingham’s art is projected behind the dancers, echoing the album art he created for D’Angelo.

A.I.M. dancer Catherine Kirk says she’s had a lifetime relationship with D’Angelo’s music. “His soundtrack has accompanied my life when I’m cleaning, cooking and romancing,” she says. “His music has entered so many different spaces and is so welcoming and groovy that I find it to be a safe space for some of the vulnerability that we enter in this work.”

Those vulnerabilities are portrayed through characters that blend Abraham’s movement vocabulary with spoken word and improvisation. Early in the five-year rehearsal process, Abraham played Cupid with his dance company members, pairing them up for potential duets, but was surprised by how many of the relationships formed organically over time.

Kirk plays the role of Tina, a confident, business-minded woman who, she says, knows how to give love more than receive it. On the other end of the spectrum is Martell Ruffin’s character, Richard Lawrence Taylor, who dances opposite Tina.

“I’m falling, and have fallen in love with An Untitled Love,” says Ruffin, who was hired over the phone in 2020 at the height of the Covid pandemic.

Ruffin describes Taylor as an amalgamation of the men he grew up around in Chicago. His character goes through a transformation over the course of An Untitled Love, which Ruffin and Kirk agree was strengthened by the hours the company spent watching romantic comedies and sitcoms while bonding over Zoom.

Abraham wasn’t keen to rehearse on the video-conferencing platform, and instead tasked his company members to engage in deep conversations around the kinds of Black love stories portrayed in popular culture.

“We’d watch a movie or a TV show, and from there would have these deep conversations about how it connected us to our characters and the work,” says Abraham. “The depth of the characters are that much richer from that experience.”

Kirk also recalls an influential community workshop held pre-Covid in Abraham’s hometown of Pittsburgh. It had a profound effect on how she approached her character study and subsequent movement. The company played card games and shared a meal during the workshop, and then gave the microphone to community members to share their love stories.

“We taped it and looked back at their mannerisms,” says Kirk. “I wanted to make sure that what I represent is rooted in humanity, and that I’m not becoming these tropes or stereotypes that get placed on the Black community by the media or visual representations of Black love.”

The work defies classification in its personifications of love, while D’Angelo’s music serves as the firm foundation. An Untitled Love’s sound integrates jazz, funk, hip-hop, blues and soul. Kirk says it aligns with Abraham’s choreographic approach, which has been described as “post-modern gumbo.”

“In the sense of a gumbo, you’re not tasting each individual flavor, you’re tasting it as one dish,” says Kirk. “I think his work really does that. It all comes together and doesn’t feel like a dance that later talks about politics or society. It all feels ingrained.”

“You hear that soul music and that connection to our elders, but you also get its present day-ness and the grit and reality of different aspects of our community,” adds Abraham. “There’s something so beautifully intergenerational, but not in a way that is trying to be anything other than honest.”

Amanda Sieradzki (MFA) is an arts journalist, dance educator and artistic director of dance company Poetica. She teaches on faculty at the University of Tampa and the University of South Florida, and writes for Creative Pinellas’ Arts Coast Journal, the Tallahassee Council on Culture & Arts, DIYdancer Magazine and ArtsATL.