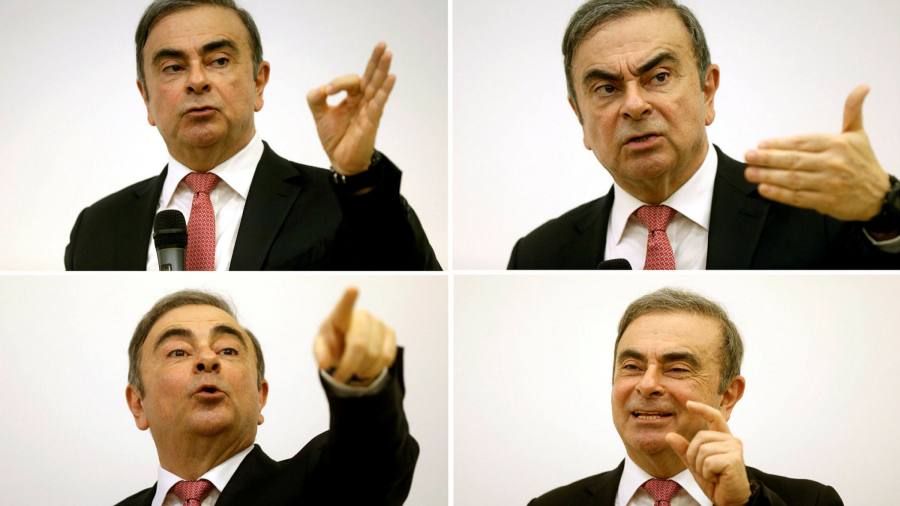 In January 2018, the head of a Nissan business unit that handled travel bookings for top executives approached the company’s in-house auditor with a problem involving first-class plane tickets and a stunning rebate demand.

Carlos Ghosn could not have possibly known it but the first domino had just fallen on one of the most celebrated careers in global business. Ten months after the ticket issue came to light, the former Nissan chairman would be arrested at Tokyo’s Haneda airport, imprisoned, interrogated and stripped of his titles at the world’s biggest automotive alliance. Mr Ghosn would later be charged with financial misconduct before staging a dramatic escape from Tokyo in a box and living under international arrest warrant in Beirut.

The greatest unanswered questions and conspiracy theories in the intervening two years have centred on the sequence of secret investigations and whistleblowing that triggered his downfall.

Mr Ghosn has evaded the Japanese court but five months into the trial of Greg Kelly, his former deputy, the answers have finally begun to emerge. Mr Kelly, an American lawyer who has maintained his innocence, is charged with involvement in an alleged scheme to conceal the scale of Mr Ghosn’s pay. Looking increasingly exhausted, he has sat in court just a few metres from colleagues with whom he worked closely for years. Two of Mr Kelly’s former peers delivered testimony on the point of tears.

But over the past two weeks, the most startling revelations have come from the testimony of Hari Nada, the British-Malaysian former head of legal affairs at Nissan, whose co-operation with prosecutors in exchange for immunity was pivotal to the arrest and prosecution of Mr Kelly and his former boss. He has given a glimpse into the inner sanctum of Nissan and the paranoid, factionalised halo that surrounded Mr Ghosn.

“No matter what harm or what consequences the company would face by reporting it, I thought the priority was to stop these things from happening,” Mr Nada told the court, adding that Japanese society would hold the company morally responsible for the wrongdoing of its former leader.

According to Mr Nada, Mr Ghosn had discovered that the first-class tickets he booked for his globetrotting family through the Nissan travel unit could be bought more cheaply online. He demanded that the business unit reimburse him — Japan’s most highly paid executive at the time — the cash difference.

The alert, which was being secretly investigated by Hidetoshi Imazu, Nissan’s auditor at the time, suggested that concerns over Mr Ghosn’s behaviour existed not only in a company where he was all-powerful, but that they might finally come to light.

“I thought Mr Imazu was courageous for being prepared to take Mr Ghosn on,” Mr Nada said.

What he did not know was that Mr Imazu would later take the findings to Tokyo prosecutors before presenting them to Mr Ghosn and the board.

Mr Nada testified that he had already become deeply concerned that Mr Ghosn, who was 63 at the time, was on the verge of retirement and had constructed elaborate mechanisms that would convert that change of status into a huge undisclosed financial windfall.

Those mechanisms, he added, were the culmination of several years of meticulous planning and rising tensions among Mr Ghosn’s lieutenants and Nissan executives. These were driven by fears that revelations of his full pay under new disclosure rules in 2010 would force his dismissal from Nissan’s biggest shareholder Renault.

Mr Ghosn, who has been portrayed in court as “a dictator”, ordered his underlings to find ways to ensure he would be paid nearly $90m in deferred compensation when he retired as chairman of Nissan. Possible solutions ranged from payments via subsidiaries in the Netherlands and Dubai to consulting fees and a non-compete agreement to a form of stock option that satisfied Mr Ghosn’s strict non-disclosure conditions, according to court testimonies.

Those involved in constructing the schemes portrayed a toxic environment where employees were torn between concerns about the handling of Mr Ghosn’s compensation and the desire to please a charismatic boss who had saved the company from near bankruptcy in the late 1990s. One female witness spoke about wanting to quit the company after questioning Mr Ghosn’s remuneration scheme, while another said he felt he “was being trusted” when Mr Ghosn shared confidential information with him.

Adding to the complexity, the final hurdle to implementing the scheme was to steer clear of closer scrutiny that would come from Mr Ghosn’s other plan to fully merge Nissan with its French partner Renault.

“I was convinced that Mr Ghosn was going to retire” in June 2019, Mr Nada said. “As a consequence of his retirement, in order for him to maintain control over the companies, he would merge the companies. And I felt the train was about to leave the station and it had to be stopped.”

The trial of Mr Kelly, which has focused on the conduct of Mr Ghosn and is set to last until at least July, has highlighted the former Nissan chairman’s absence from Japan and its justice system. After his flight to Beirut, Mr Ghosn has continued to deny the allegations against him, accusing senior Nissan executives and prosecutors of “plotting” his ouster.

His absence will probably become more glaring after a federal judge in Boston on Thursday rejected the efforts of Michael and Peter Taylor — the father and son team who allegedly organised Mr Ghosn’s escape — to avoid extradition to Japan and a trial in Tokyo.

Mr Kelly’s wife Dee said her husband was holding up well despite the trial’s length. “We’re 64 years old and we can’t get our time back,” she said as she spent Christmas Eve in the courthouse.