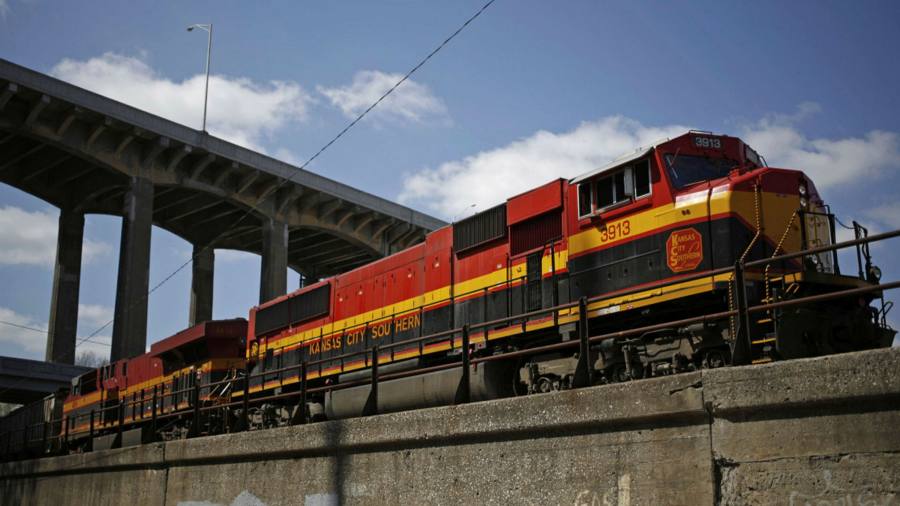 Railway group Canadian National has made a $33.7bn bid for Kansas City Southern, including debt, as it seeks to derail the deal the US group reached last month with Canadian Pacific.

The Montreal-based company has made a cash-and-stock offer valuing Kansas City Southern at $325 per share, about 21 per cent higher than the agreed offer from Canadian Pacific. However, it is likely to face greater regulatory scrutiny due to its size.

Under the terms of the agreement, Canadian National offered Kansas City Southern shareholders $200 in cash and 1.059 shares of CN common stock. Canadian Pacific offered $90 in cash and the remainder in its stock. To pay for the deal, CP said it would issue 44.5m new shares and raise $8.6bn in debt.

Whoever wins the Canadian battle over Kansas City Southern, the smallest of the seven Class 1 railways that haul US freight, will pull off the first major rail deal since 1999, when CSX and Norfolk Southern acquired Conrail and split it between themselves.

A person close to Kansas City Southern said the US group would seriously consider the rival bid but warned it would be a tougher sell to the Surface Transportation Board, the US freight rail regulator that will need to approve any combination.

A merger with either Canadian group would establish the first North American railway spanning Mexico, the US and Canada. Canadian National, announcing its proposal on Tuesday, said its increased cash offering would give Kansas City Southern shareholders greater certainty and its proposal would reduce congestion and greenhouse gas emissions.

Both Canadian National and Canadian Pacific operate in the central and eastern US, as do CSX and Norfolk Southern, while Union Pacific and BNSF are present in the west.

Kansas City Southern is the only operator with north-to-south operations with a route network stretching from Missouri to ports on both coasts of Mexico. It also owns a 50 per cent stake in the Panama Canal Railway Company.

For both Canadian companies the deal is a big bet on trade picking up after the approval last year of the US-Mexico-Canada trade agreement, which replaced the North American Free Trade Agreement.

Canadian National said that the deal would allow the combined company to tap an $8bn market among the three countries, while it intends to add more services across key network points such as Laredo, Texas, southern Ontario and Detroit.

Jean-Jacques Ruest, chief executive of Canadian National, said in a letter to the Kansas City Southern board that the combination would generate $1bn annually in synergies, mostly driven by new business rather than cost-cutting.

The bidding war for Kansas City Southern comes amid a flurry of mergers and acquisitions activity over the past 12 months, as companies that prospered during the pandemic look to snap up assets to bolster their operations.

Shares in Canadian National are up 70 per cent since the lows of mid-March 2020, though the company was down 5.9 per cent in Toronto following the announcement of its rival bid.