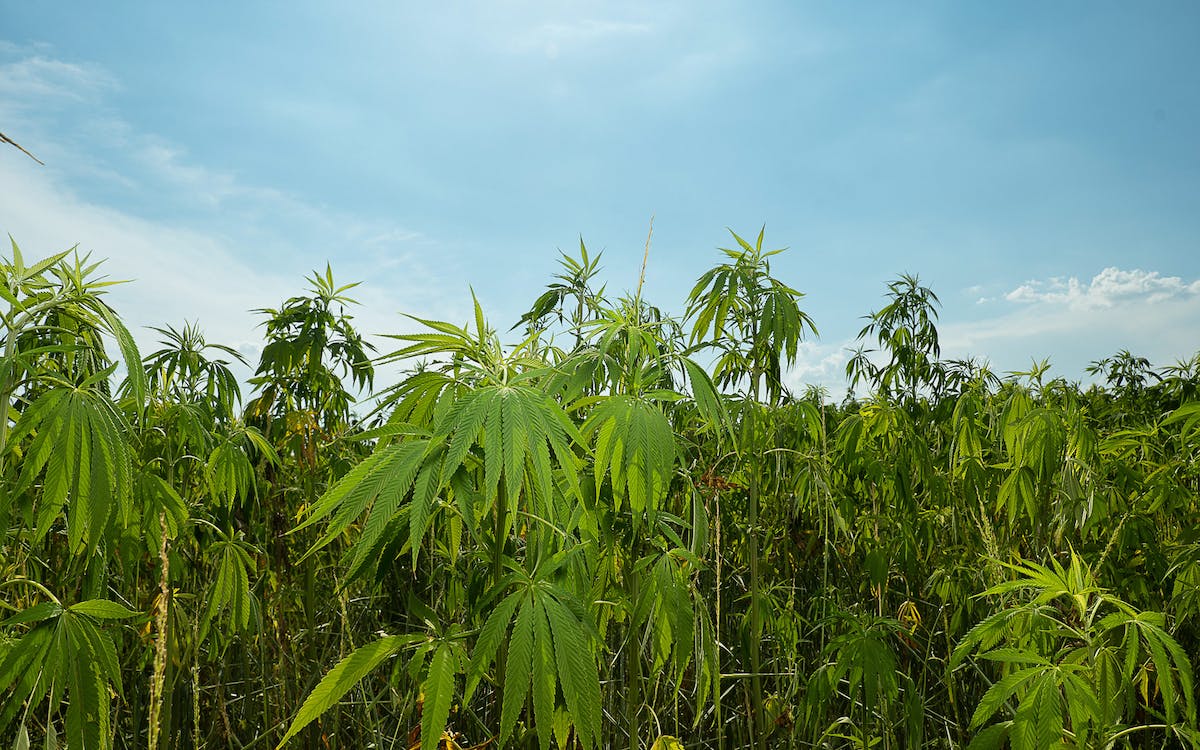 In 1810, Francis Cabot Lowell embarked on a mission of American espionage. The target: Britain’s booming cotton industry and, more specifically, its power loom. One hundred years after he memorized and re-created the loom design, the U.S. finally surpassed Britain in cotton production. But America’s textile muscles atrophied faster than they developed. You know that story: automation gobbled up farm and factory jobs, neoliberal policies added fuel to the fire, and manufacturing went overseas in a race to the bottom. Now, as the American textile industry jockeys for a comeback, the king may not be cotton. At least not if Lucas Evans is involved.

Evans is set on hemp. And in a tip of the hat to tradition, he’s processing it for fiber in Taylor, which used to be the largest inland cotton market in the world. Beyond Central Texas, researchers, geneticists, regulators, and business owners are banding together to develop and support a stable plant that will make hemp a viable part of Texas agriculture.

Hemp was banned by the Controlled Substances Act in 1970, when the U.S. government failed to distinguish it from its sister plant, marijuana. But when it was decriminalized in the 2018 Farm Bill, farmers such as Evans began exploring ways to tap the plant’s potential. One that’s gaining momentum is using hemp as a fiber crop like cotton and jute, which are harvested to make textiles. Hemp could be a viable cash crop that requires less water and chemical inputs than cotton, delivers more income and autonomy to farmers, and helps rebuild America’s dormant textile infrastructure.

Evans was born and raised on a farm just outside Taylor that was established not long after Lowell helped start an industrial revolution. In high school, Evans watched his family farm get replaced by rows of suburban houses as industrial agriculture took over.

Still, he saw agriculture as a vehicle for change. Seeking ways to gain independence from megacorporations with outsized influence on farm policy, Evans turned to hemp. I met Evans at a South by Southwest event where he was energetically searching for apparel designers interested in making hemp clothes. Despite living through the challenges on his family farm, the 27-year-old retains the untrampled spirit of youth, only today it’s coupled with the acumen of an agribusinessman who’s long been in the game. “I used to think of [hemp] as purely spiritual or medicinal,” he said. “Then I found out the word ‘canvas’ came from cannabis, and it opened my eyes to the possibilities of the plant from the past and for the future.”

Despite his conviction, there are still issues to address before we cheer for cannabis clothing. When the Farm Bill passed, farmers rushed to grow hemp as sales of CBD products skyrocketed. But the market quickly became oversaturated and prices fell. Evans watched the CBD market closely, and unlike the green-rush growers before him, took lessons from this to help assure hemp’s future as a fiber.

During the early days of the CBD boom, many farmers expanded their growing operations without the facilities or equipment to turn the plant into CBD oil. “Farmers fail at this because they don’t think about who’s going to turn their crop into a product. They think if they farm it, people will come, but that hasn’t happened,” Evans said.

To avoid the same fate, Evans started Texas Hemp Processors. When it opened in 2019, there were no other legal facilities in Texas that could turn a hemp crop into biomass used for textiles, building materials like “hempcrete” or insulation, and more. Today there are two others: Tetra Hemp in the Rio Grande Valley and Delta Agriculture in Slaton. (Two additional Texas growers have announced plans to set up fiber processing.) Last year, Evans and his team processed 4,000 pounds of hemp, most of which will go on to become building material, and they aim to hit 80,000 this year, with more of it dedicated to fiber. He’s excited about his growing location in Taylor, around the corner from his family farm. “It’s really in the perfect part of Texas, just northeast of Austin. It gets as much rain as Seattle, has deep rich ‘Houston gumbo’ soil, and access to railroads.” His processing facility is in an old airplane hangar close by, cutting down on transit.

John Bradley, the founder and CEO of Tetra Hemp, grows hemp 350 miles to the south, where silty coastal soils rule. He’s set to start processing it in October and told me that perfecting the genetics of the crop first was crucial. He and Evans are working on refining the plant’s genetics with researchers at Prairie View A&M University, where Aruna Weerasooriya, chair of the Plant & Environmental Sciences Department, is leading a team of scientists, students, and private companies in creating a repository of fiber genetics. His team gathers data from the hemp plants in their Prairie View greenhouse to determine which strains work best for fiber, where they’ll grow, and what fiber quality they’ll produce. This work was challenging at first, both because there aren’t recommended strains for Texas climates and because hemp has been manipulated so much to isolate THC, causing huge complexities in genetics. Whether they want fiber, food, or something else, most farmers today have to reverse engineer their growing operations.

Despite the hurdles, Weerasooriya remains optimistic. “We have subtropical conditions. I’m certain we can have a stable crop, but we need to do more research,” he said. His colleague Calvin Trostle, a professor in Texas A&M’s Department of Soil and Crop Sciences, doesn’t want to claim Texas as a hemp hotbed too soon. He says, for instance, that hemp grown for fiber could be better suited to a cooler climate, where it might “grow shorter.”

Although the plant can grow to up to sixteen feet tall, Trostle believes the ideal hemp plant for fiber should be no taller than six feet, with a diameter the size of a pencil. That’s because as the plant grows, its fibers do too, which ultimately could produce a coarser textile; taller hemp, he believes, is better suited to building materials or paper. But in China, where half of the world’s hemp fiber is grown, the plant mostly stands very tall and thin. Texas farmers are splitting the difference: Bradley’s hemp stands assertively at twelve to thirteen feet tall, and he contends that it can make a premium fiber. Evans’ hemp grows to between six and eight feet.

Eventually, the Texas hemp industry may benefit from agreed-upon measurements for assessing the fiber after it’s processed. The American Society for Testing and Materials (ASTM) sets standards for assessing the properties and quality of fiber. In cotton, for example, the ASTM measures color, length, strength, uniformity, and other characteristics to classify the material. Bill Althouse, who sits on several ASTM committees, says this work has progressed slowly on hemp. Right now, the ASTM’s hemp fiber committee doesn’t include enough producers or buyers as members, and engineers are still working through the technicalities of how to classify hemp for fiber production.

Though abiding by the standards is voluntary, Althouse believes that more producers need to uphold a standard that will help determine the value of their product. Otherwise, he fears, the hemp industry will become an echo chamber of folks trying to save the world, claiming everything under the Texas sun can be made from hemp before they check with the engineers or buyers.

If the processors can produce a high-quality textile, buyers are ready to purchase. Austin’s Brianna Kilcullen tried to find locally grown hemp when she started her sustainable towel company, Anact, in 2018. “I looked for hemp in the States but couldn’t find it. Everyone was doing CBD. The only place willing was China. I went ahead because I wanted to show hemp’s potential. I knew there could be something American-made later.”

It was a similar story with Patagonia. When Evans heard the company was trying to source hemp domestically, he reached out, but ultimately wasn’t able to meet their specifications. “Even if they’re interested, it’s hard to ask a brand like Patagonia or Levi’s to move a factory operation to America when we don’t have the full infrastructure yet,” he said. While Patagonia is supporting American growers, the majority of its hemp still comes from China.

Evans and Bradley both process their hemp with decorticators, which can produce heftier fibers for, say, canvas or denim, but not the finer fibers used for linens and delicate apparel. The latter would require more processes and equipment to refine the fiber that, to date, have been chemically intensive. That’s why most of the hemp in America is “cottonized,” said Summer Star Haeske, cofounder and vice president of sales at EnviroTextiles, one of the first American hemp textile leaders. Instead of processing hemp fiber according to its unique genetic traits, most producers run it through cotton processes because that’s the infrastructure they have now. But as the name suggests, cottonized hemp acts just like cotton, not like the strong, versatile fiber that hemp can be. Star Haeske says we need facilities that can turn the longer hemp fibers into finer woven material.

This sophisticated infrastructure could take years to develop. For now, Star Haeske and her mother, Barbara Filippone, a textile engineer who helped standardize many Chinese hemp fabrics on the market today, believe that American growers should start with seed and grain (which require less infrastructure than fiber) and, more critically, should look for ways to utilize the whole crop. This could be tricky, however, given that hemp grown for fiber could require different growing conditions than hemp grown for building or other less refined materials. But Star Haeske believes sacrificing a little on fiber quality to cultivate one plant in multiple ways would help protect the producer, especially at the outset.

Right now, she thinks Evans is the closest in Texas to getting this right. He grows about 120 acres’ worth and processes it for fiber, grain, seed, and other biomass while offering processing, transit and storage, and product development to growers and buyers. To make it in America, he says, hemp will have to produced in very localized ecosystems. “It’s gotta be: the processor is the farmer, is the retailer.”

Agency for the farmer, after all, is what led him to hemp in the first place.

“It’s the definition of a free market in the wild west. It will take time to rebuild the industry, but if things go right, I think we’ll have a Texas-made hemp textile in three years.” Time will tell if we can weave something worthy in three. Or if we’ll be waiting another hundred.