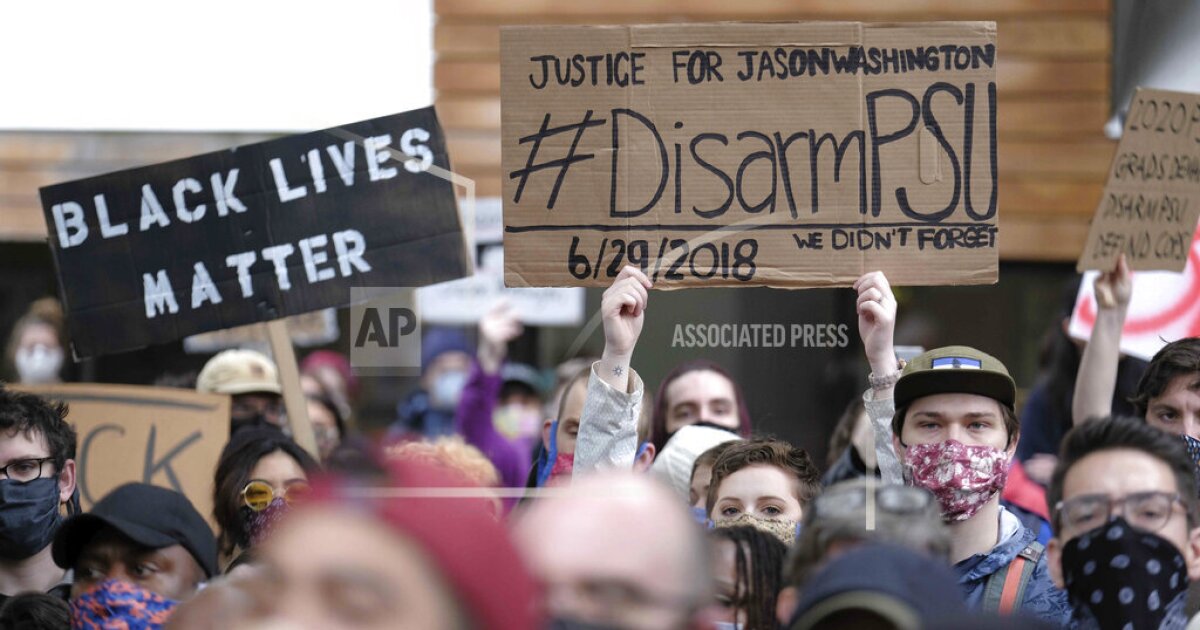 A University of Massachusetts at Amherst employee was walking from the campus recreation center to his office when someone called the police to report an “agitated Black male.” He felt powerless and scared, he later wrote, while detectives questioned him in the lobby of the building where he works as a case manager in the university’s disability-services office.

A new model policy for “racially just policing,” written by the ACLU of Massachusetts and Bridgewater State University, and published on Tuesday, was designed to prevent episodes like that, which have occurred again and again. They can traumatize the victims and make students and employees of color feel as if they don’t belong on predominantly white college campuses.

Many activists and scholars who study policing and racial equity argue that colleges and universities should not have police departments — that resources currently spent on the police should be reinvested in other services, such as mental-health care. But the ACLU and Bridgewater said that reforming policing “is a critical first step toward creating a more racially just society.” The document they created, they said, is meant to help colleges that have police departments.

Among the policy’s recommendations: Colleges should create a department of community mental-health and support services that would respond first to reports of people experiencing mental-health, behavioral-health, or substance-use issues. Social workers and clinicians should be included in the department, which should have its own phone line that is separate from the police line.

David Tillinghast, who worked on the policy as police chief at Bridgewater, said that recommendation would be one of the most difficult for colleges to carry out because it would cost money. At Bridgewater, he said, on-campus, on-call clinicians can respond to emergency calls, but not on their own. Tillinghast said Bridgewater would have to change that practice to comply with the recommendations.

To create the policy, its authors surveyed public colleges and universities in Massachusetts — 27 were contacted and 18 responded. Though the institutions surveyed had mental-health services, they were not ready to go out in response to calls.

“We learned that there wasn’t the type of infrastructure to be responsive in the way that police are,” said Rahsaan D. Hall, director of the racial-justice program at the Massachusetts ACLU and another author.

The ACLU and Bridgewater also recommended that colleges analyze and release data about who is stopped and arrested by campus police officers, disclosing the “perceived and actual” race and gender of the people they interact with, the reason for the interaction, and the outcome, among other things.

The model policy recommends that police officers not respond to every call about a “suspicious” person but limit their responses to instances or risks of physical harm to other people. Dispatchers should gather enough information to know that people are being reported because of their actions, not because of how they look or their perceived race.

“Use of phrases such as ‘out of place,’ ‘looks sketchy,’ ‘seems off,’ or ‘does not belong’ may involve judgments that are influenced by the caller’s explicit or implicit views about race,” the policy says.

That recommendation is “the most dramatic departure for us in law enforcement,” Tillinghast said. The police, he added, should “take a step back and consider whether the response itself could be harmful.”

Charles H.F. Davis III, an assistant professor of higher education at the University of Michigan at Ann Arbor, said those recommendations — particularly that colleges should support mental health and release data on their police encounters — are the bare minimum of what people should expect from institutions with police forces.

But trying to reform a campus police department “misunderstands and misrepresents the problem,” Davis said, because such departments were, at their founding, rooted in racial inequity.

“The fundamental premise of the document itself has to be challenged,” Davis said. He also questioned the idea that members of police departments could reform and police themselves, and he stressed the importance of including members of the communities that live near colleges — who often are also policed by campus departments — in making policy.

Hall said the policy does not recommend building out more police infrastructure. From the ACLU’s perspective, he said, the policy is not meant to be “an endorsement of whether or not campuses should have police on their campuses.” He said the ACLU is “cognizant of the ongoing dialogue and whether or not reform is just the perpetuation of harm.”

This policy, he said, “begins to move towards an approach to policing that is less harmful.”

Colby College Bans Discrimination Based on Caste | Inside Higher Ed

Michael Jackson Passport Application Up for Sale for $75,000

Two teens and a man shot at a Halloween house party

The Winner of IGN's Best Video Game of All Time Bracket