“What exactly is Artificial Intelligence (AI)?” I meekly ask, cutting in on my colleague Aniket’s articulate, but jargon-filled explanation about an intriguing project he and his Conservation Behaviour team at the Wildlife Conservation Trust (WCT) are working on, which involves applying AI algorithms and models to find solutions to various conservation problems in central India. Like many other laypeople, my mind immediately conjures up pictures of terminator-like robots on hearing the term AI. Aniket Bhatkande, an erudite economist who heads the Conservation Behaviour Department at WCT, patiently goes on to address my very fundamental query. 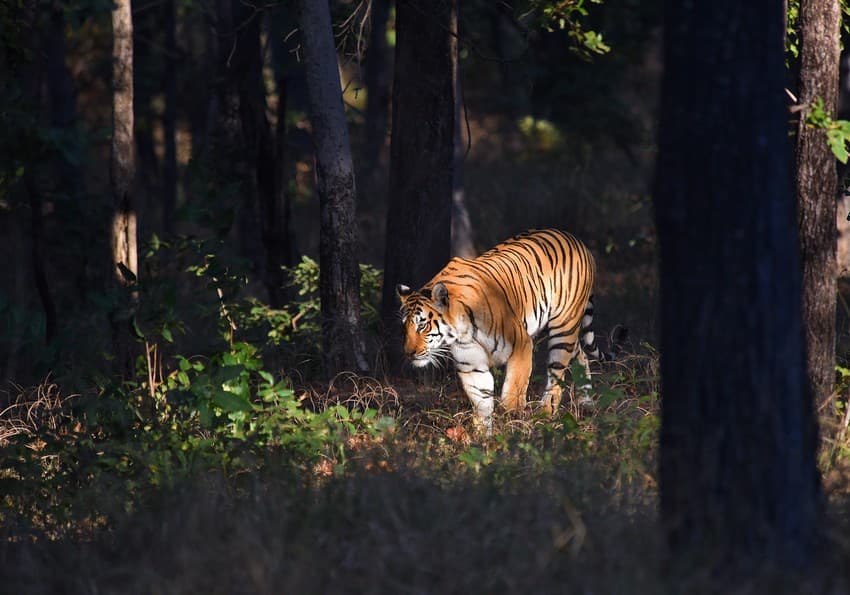 “AI-based models are all about the data. Computer science has come thus far to be able to build algorithms that allow machines to process and analyse data with human-like intelligence that can ‘learn’, ‘think’, and ‘rationalise’. Variety of advanced tasks and decisions that ideally require human intervention can today be undertaken using computers with higher accuracy and speed, and without having to explicitly give the machine any instructions. This opens up a whole arena of possibilities that can be used to solve problems facing mankind,” he says.

AI has touched and impregnated nearly every aspect of our lives – how we stay connected, stay informed, make purchases, or access information. From executing a simple Google search, to summoning Siri to play music on your device to being proactively alerted of your favourite books available on Amazon, AI technology is everywhere. It has reinvented industries such as healthcare and e-commerce making services much more powerful, speedy, accurate and objective. The dramatic metamorphosis that AI has seen in the human society is nothing short of miraculous. The ‘intelligent’ technology that surrounds us today has begun to blur boundaries between human and machines, and that is what AI is all about after all – machines simulating human intelligence, traits, and capabilities including learning, remembering, and rationalising.

If AI is being used so extensively to improve our lives by providing highly advanced solutions to varied global problems, why not then apply it to solve the most complex conservation problems of our time?

Effort to conserve nature is unarguably a feverish race against time. Natural ecosystems are crumbling the world over at a breakneck speed due to human actions and lack thereof. Extinction rates are through the roof, climate change is causing the planet to warm very fast very soon and intensifying extreme weather events such as forest fires, tropical storms, floods, glacier melt etc.

At the local level, problems become compounded. Human-wildlife conflict is a major conservation challenge in India, from among the quagmire of various wildlife and environmental issues, which is intensifying in many parts of the country incurring heavy losses for people and wildlife. It has fast emerged as one of the most potent challenges wildlife faces today. Exploding human population and blithe urge to make rapid economic advancements without factoring in ecology has seen thousands of acres of natural habitats in India succumb to the anthropogenic pressures. With a large portion of the biodiversity concentrated within the man-made boundaries of Protected Areas (PAs) which make up only a mere 5% of India’s total land area, the pressure to protect and conserve what little wildlife survives within and around these PAs is a challenge of behemoth proportions.

Advancements in technology and science have over the years amplified conservation and research efforts. Camera trapping has allowed for more accurate and less intrusive animal population estimation such as that of the tigers in India; radio and satellite telemetry technology has resulted in better monitoring and tracking of wild animals that has exponentially improved our understanding of their behaviour, movement patterns and more. Geospatial technology such as GIS and remote sensing have dramatically empowered our ability to plot and analyse wildlife abundance, movement, habitat integrity and connectivity, and improve forest protection mechanisms.

It is now time for AI to step onto the scene. And it has. AI algorithms are already aiding various conservation initiatives worldwide. From identifying individual giraffes in Africa based on the images fed to an AI software that is helping keep a tab on the endangered giraffe populations, to Machine Learning models making predictions of conservation status of underrepresented plant species. The scope and potential of AI applications are limitless.

And that is what conservation scientists at WCT are tapping into. WCT’s Conservation Behaviour team has been applying AI in several conservation projects. One such project, which is a promising collaboration between WCT and Google Research India’s AI Lab, involves designing AI models that will help predict human-wildlife interactions in the state of Maharashtra in central India. Like Aniket mentioned earlier, it is all in the data.

A local collecting fuelwood from the forest (left) and a tiger (right) caught on WCT’s camera traps in the Brahmpauri Forest Division, Chandrapur district, Maharashtra. Human-tiger conflict is an escalating problem in this region.

“Human-wildlife interface refers to the continuum of direct and indirect contacts between wild animals and human communities that share the same environment. These interactions can result in conflicts between the two, leading to a loss of life for either. Given the high densities of population that reside in and around forests and their dependence on these areas for livelihood, the frequency of these interactions is high as well as difficult to monitor. Understanding the various aspects of these interactions is crucial in order to identify patterns that would enable creation of strategies as well as policies to better manage and mitigate this interface. Juxtaposing spatial, economic, and psychosocial aspects of these interactions against the ecological data, including camera-trap and acoustics data from forests, will provide a better understanding of the interactions,” he explains.

But where does WCT acquire all the required data from? Chandrapur district in Maharashtra, where this project is presently focused on, is part of the landscape where WCT has been conducting extensive research on the ground with respect to human-wildlife interface. WCT biologists, social scientists, educationists and GIS analysts have been working in the region for the past several years, installing camera traps and analysing the data on tiger movement and other aspects, conducting surveys of communities to collect conflict-related data, assisting Forest Department in human-wildlife interface management, developing solutions to mitigate crop degradation by wild herbivores among others. All this fine scale data from WCT’s own extensive research and other sources including the Forest Department’s compensation records, government databases on human and livestock populations, Google’s satellite data etc. has largely laid the foundation for the AI project.

“Human-wildlife interface management is one of the most pressing conservation needs of today. However, high levels of variability in biological systems coupled with difficulty in collecting realtime data makes proactive solutions very difficult to come by. Consequently, the government is relying on providing monetary compensation for losses due to crop depredation by herbivores or carnivore attacks on livestock, rather than taking steps to avoid losses in the first place. As a result, despite paying out a considerable quantum of money to aggrieved families the Forest Department is unable to appease them or meet their expectations. This has strained the relationship between the government and local communities to the detriment of forest and wildlife. AI promises to change this by improving the predictability around negative interactions and therefore allowing the Forest Department to take proactive steps to avert potentially dangerous situations between people and wild animals, thereby providing a win-win for both human and non-human stakeholders,” says Dr. Anish Andheria, President, WCT. 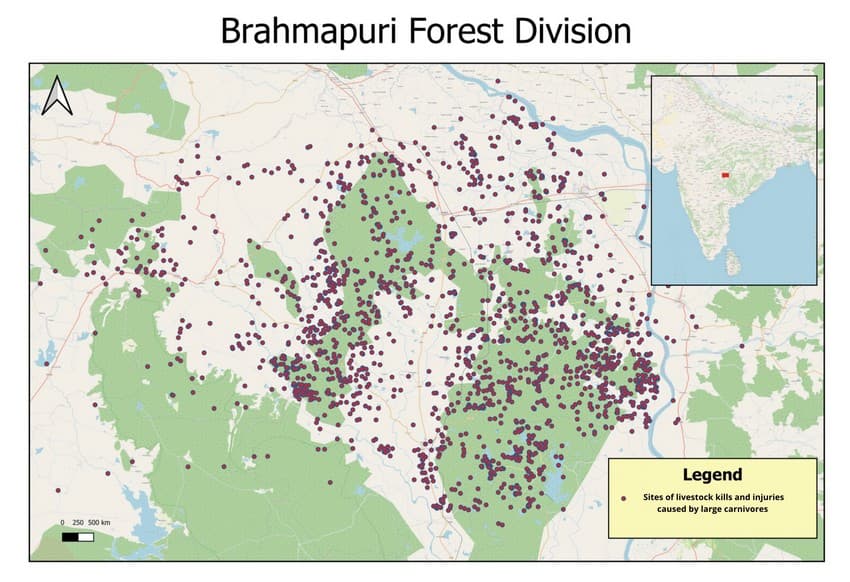 The map of Brahmapuri Forest Division in Chandrapur District shows the spread of reported livestock kills and injuries by wild carnivores between 2014 and 2018 as per the Forest Department data specific to WCT’s area of study in the state of Maharashtra, India. Photo credit: WCT.

Bramhapuri Forest Division in Chandrapur, Maharashtra, is a major tiger bearing landscape with heavy tiger and human population densities. A human dominated landscape with high densities of carnivores and reasonable populations of herbivores generates scope for humans and wildlife to interact. These interactions may often result in conflict leading to loss of farm produce and livestock and in some cases, human life. Primary data collected from the landscape show that over the last one year, based on the Forest Department dataset, half of the households have experienced crop depredation and more than five per cent have experienced livestock loss due to wildlife in the region.

The nature of human-wildlife interface is complex and is not limited to the actual conflict incidences. The response towards any conflict situation is a response derived from a cumulative series of preferences, attitudes and perceptions towards government institutions, systems, processes, resources and the extent of access to the same, leading up to the event. AI can help in filling the lacunae which exists due to unavailability of data. It can help in identifying conflict areas through detection of human presence in forests.

“The aim of this project is thus, understanding, identifying and predicting the conditions under which interactions between humans and wildlife may transform into conflict, and using these predictions to develop a policy-based solution that involves multiple stakeholders at the community, district and state levels. AI is being used to identify drivers of conflict between animals and villagers and using the predicted conflict as an input for designing an optimal policy,” says Aniket. 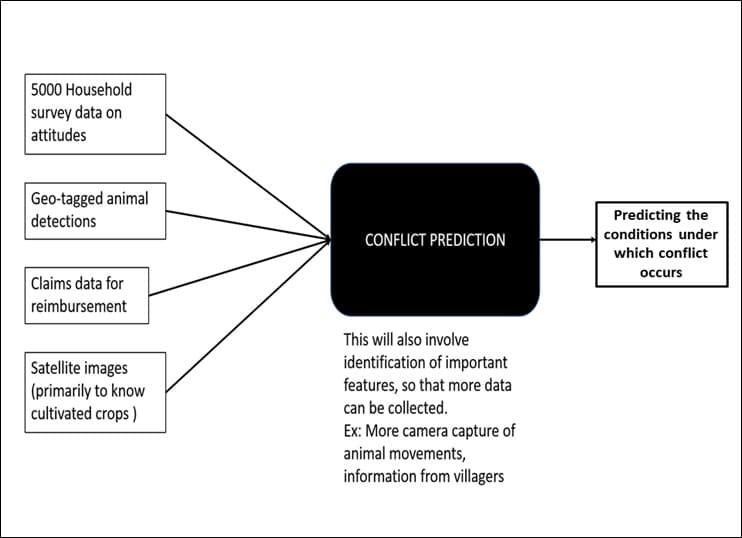 The predictions will be based on multiple layers of data. The analysis would require collecting, amalgamating and merging the economic, psychosocial and geotagged animal movement data collected by WCT with spatial-temporal data on conflict provided by the government and the satellite imagery on cropping patterns and economic activity from Google Earth Engine. These predictions will then act as an input in developing a strategy to mitigate conflict.

In 2020, WCT embarked on a unique project with Google Research India under its AI for Social Good Programme. This project takes a novel approach by exploring AI-based solutions and has designed AI models to predict human-wildlife conflict with promising results. Testing and scrutiny of these models are in progress.

“WCT has made promising progress on the project with Singapore Management University and Google to develop novel AI techniques to help mitigate human-wildlife conflict in the Bramhapuri Forest Division. Together with Google.org, we are happy to support this work to advance AI research towards positive societal applications,” says Milind Tambe, Director – AI for Social Good at Google Research India.

Such collaborative and innovative efforts are paving the way for cutting-edge conservation action.

Respawn Responds to Its Own Employee’s Titanfall Comments: ‘Who Knows What the Future Holds’