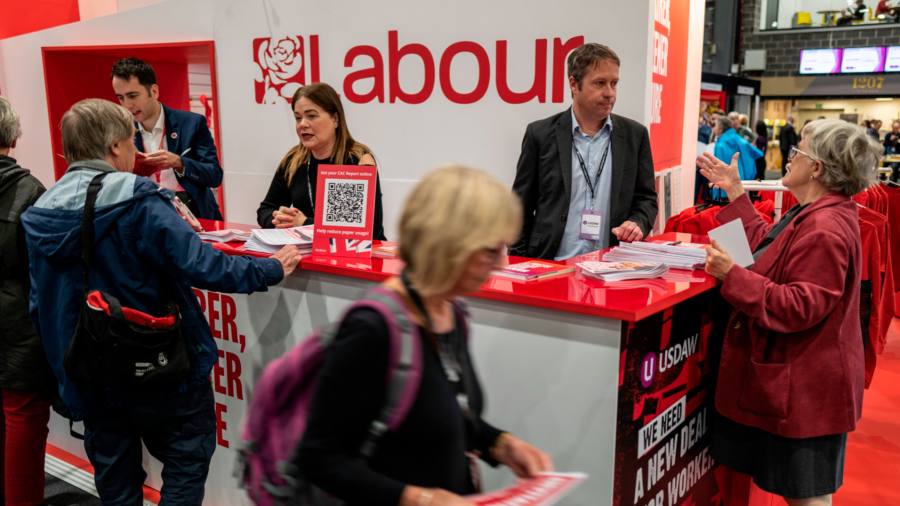 Business delegates descended on the halls and the wine-soaked bars around the Exhibition Centre in Liverpool’s Docklands this week, seeking to gauge what a Labour government would mean for the future of industry.

Labour has been out of power for 12 years but currently Britain’s opposition party is leading by a significant margin in the opinion polls as the Conservative administration struggles to contain mayhem in the markets.

The shift in political fortunes is not lost on corporate leaders who have been watching Labour’s annual conference with keen interest.

“I was at a party when the YouGov poll putting Labour 17 points ahead dropped and it felt like being in a religious group, you could feel the atmosphere change, it was electric,” said one business figure, referring to Labour’s jump in the polls on Monday.

“With the government going through an absolute shitstorm and Labour so far ahead in the polls, people were incredibly happy.”

Labour was founded as the party for the trade unions but its current leader Sir Keir Starmer — like his predecessor Tony Blair before him — is trying to seek an accommodation with the business world.

The Labour conference this year had its highest business attendance since 2010, the year the party lost power. In Liverpool there were 600 attendees at one business reception on Tuesday night alone. Labour said it raised over £200,000 from corporate sponsorship arrangements at conference.

“Companies like ours have to talk to political parties of all stripes, that’s just pragmatic, but in the past there have been times when it has felt like we were going through the motions,” said one business delegate.

“This time there’s something in the air, it’s not that it’s a dead cert that this lot will be in power by 2024 but you wouldn’t bet against it.”

There is a pragmatic calculation behind the outreach towards Labour by some companies that want to maintain sound relations with both main political parties.

One corporate figure described the conference atmosphere as upbeat, with delegates believing they might win for the first time in more than a decade.

But the figure also acknowledged comparisons with 1992 when the then Labour leader Neil Kinnock gave a celebratory rally in Sheffield, just before losing a general election.

“There are more business people here, they are a higher level of seniority, they are taking Starmer very seriously. there’s just a question of whether it’s all a bit ‘Kinnock in Sheffield’,” they said.

Starmer has sought to “detoxify” the party after it swerved further to the left under his predecessor Jeremy Corbyn, whose policies included mass nationalisation of private groups and the seizure of shares in thousands of companies.

Not only has he tried to rebrand Labour as the party of “sound money” — with a promise that all new policies be fully costed — in contrast to the current government whose “mini” Budget has unleashed mayhem in gilts and currency markets.

But Starmer has also promised close engagement, describing himself as “pro-businesses” and keen to “partner with business”.

In his conference speech on Tuesday, he said the party “will scrap business rates, level the playing field for start-ups and the high street” and “give employers new flexibility to invest in the world-class training they need”.

“Different shadow cabinet members meet with trade bodies and different sectors on a regular basis,” he said. “For us this is not just about the volume of meetings, this is about a genuine dialogue . . . we want to listen to them. but also let them see our point of view, our thinking. The message is that we are a changed party from 2019.”

Labour has set up a stronger “business engagement team” this year to forge closer links with boardrooms. Some of the party’s policies have not, however, been welcomed by all quarters, for example its crackdown on private equity tax breaks.

But Michael Moore, head of the British Private Equity and Venture Capital Association, noted that the Labour leadership seemed interested in working closely with business.

“People have taken a lot of comfort from the fact that senior Labour figures are listening and engaging with business,” he said.

However, some observers remain sceptical about the party’s policy platform: “Labour’s plans to encourage entrepreneurs and business investment seem incredibly thin so far, but hopefully that will change as they get nearer to power,” said one Labour veteran.

Starmer’s policies that have proved popular with the business world include a pledge to abolish business rates and replace them with a fairer system.

“Labour have upped their game over the past six months or so,” argued James Starkie, partner at the consultancy firm, 5654 & Co. “Policies that are important to many sectors, for example business rates, have been a major part of Labour’s push to show it’s been listening.”

This sentiment was echoed by Craig Beaumont, chief of external affairs at the Federation of Small Businesses, who argued that Labour now “actively” wanted to work with industry.

“We have also found an engaged audience with Labour and their team — it’s not a case of all our specific policy proposals being adopted but the shadow cabinet are in listening mode,” he said.

Throughout the conference, roundtables were held with industry leaders on topics ranging from the future of health technology, boosting exports to supporting scientific innovation. The party also announced its industrial strategy with a focus on green energy, data and supply chains sectors.

Starmer announced that a Labour government would set up “Great British Energy”, a publicly owned energy group modelled on European state-owned companies such as EDF. He said that as prime minister he would allocate £8bn for co-investments in private sector energy projects in the UK.

Labour confirmed that it would only nationalise one industry — the railways — that has already been under much tighter government control since the pandemic.

Yet some business figures are uneasy that among the Labour membership there remains an appetite for more wholesale nationalisation. Figures such as mayor of Greater Manchester Andy Burnham have argued that there remains a “case” for bringing utility firms into public ownership.