Brussels seeks to win round critics of EU-China deal 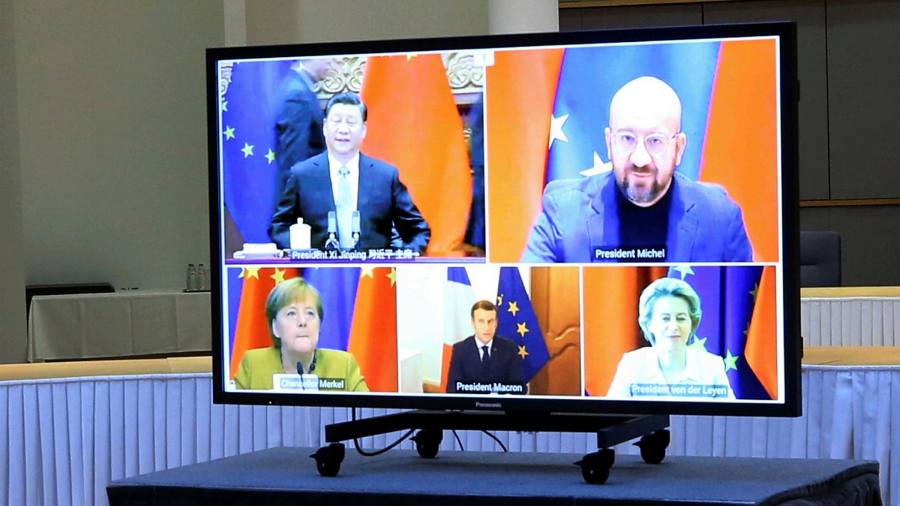 Brussels is poised to reveal the full details of its controversial market-access deal with China, as it seeks to build a case for an accord that has come under attack because of Beijing’s human rights record.

Business has been waiting eagerly to know what precisely the agreement — struck at the end of 2020 — offers to EU companies operating in the Chinese market. Brussels sees it as a breakthrough that “will give European businesses a major boost” and put them on a level playing field with US rivals.

It will remove some barriers to EU companies hoping to invest in China. Industries where Brussels has secured improved terms of access include the automotive sector, private healthcare, cloud computing and ancillary services for air transport.

Publication of the technical annexes to the deal is set to come within days. It will be the prelude to what are likely to be fierce EU debates over ratification of a treaty that has been denounced by human rights advocates given Beijing’s repression of Muslim Uighurs in Xinjiang and its suppression of the pro-democracy movement in Hong Kong.

A coalition of 36 civil society organisations, including trade unions, wrote to EU chiefs earlier this year calling for the investment agreement to be reopened to add “enforceable human rights clauses”. However, Brussels argues it has already secured unprecedented commitments.

Backers of the deal, such as French president Emmanuel Macron, have said it will give the EU leverage in pushing China on human rights, and that the bloc will be vigilant in making sure Beijing honours provisions on labour standards.

This message was repeated last week by French foreign minister Jean-Yves Le Drian, who stated that “our commercial partnership will not be built on a disregard for human rights, and we will be particularly attentive to this”.

But MEPs have warned that approval of the deal by the European parliament — an essential ratification step expected in early 2022 — is not assured. It will depend on the EU adding to the arsenal of measures at its disposal to tackle human rights violations and unfair trading practices.

“We defend our principles and we need all the measures to defend our principles,” said Inma Rodríguez-Piñero, lead MEP on China trade issues for the parliament’s large centre-left bloc. Speaking to the Financial Times, she also warned that China needed to provide a “clear roadmap” for implementing International Labour Organization conventions against use of forced labour.

China agreed in the investment treaty with the EU to “make continued and sustained efforts” to adopt the conventions.

Rodríguez-Piñero’s warnings closely parallel those of Iuliu Winkler, lead MEP on China for the parliament’s trade committee and a member of the assembly’s biggest group, the centre-right European People’s party.

He noted that the deal offered clear benefits to EU companies, but “forced labour is a no-go, this is our message”.

In 2019, the European Commission described China as a “negotiating partner with whom the EU needs to find a balance of interests, an economic competitor in the pursuit of technological leadership, and a systemic rival”. But, having negotiated the deal on behalf of the EU, it insists it has not been naive.

It has underlined that the deal “is the first time that China agrees to such ambitious provisions [on labour rights] with a trade partner”. Officials also point to Brussels’ recent success in pushing South Korea to honour ILO commitments in its trade deal with the EU as an example of what can be achieved.

The EU argues that it is the clear winner in the deal when it comes to benefits for business, and that the accord nonetheless increases the bloc’s leverage over China on human rights.

They include active use of a “global human rights sanctions regime”, approved by EU governments in December, that allows the bloc to collectively target state and non-state actors responsible for human rights violations, no matter where they occurred.

Trade Secrets is the FT’s must-read daily briefing on the changing face of international trade and globalisation.

Sign up here to understand which countries, companies and technologies are shaping the new global economy.

MEPs on Wednesday also formally called on the commission to press ahead with plans for legislation on corporate due diligence.

The planned rules would require companies to make sure forced labour is not used in their supply chains — something already in place in the US and Canada.

Luisa Santos, deputy director-general at BusinessEurope, an association representing EU employers, said that companies backed the EU-China investment deal because it would help to “correct the unbalanced situation we have right now in the market”.

But she said business also supported the creation of new measures, legally separate from the agreement, to protect human rights and address market distortions.

“It will be more beneficial to Chinese interests if we scrap the deal than the other way around,” she said. “But the agreement should not be the only tool in our bilateral relationship.”

For MEPs, the fate of the investment treaty may lie as much in the EU and China’s actions between now and the ratification vote as in the content of the deal itself.