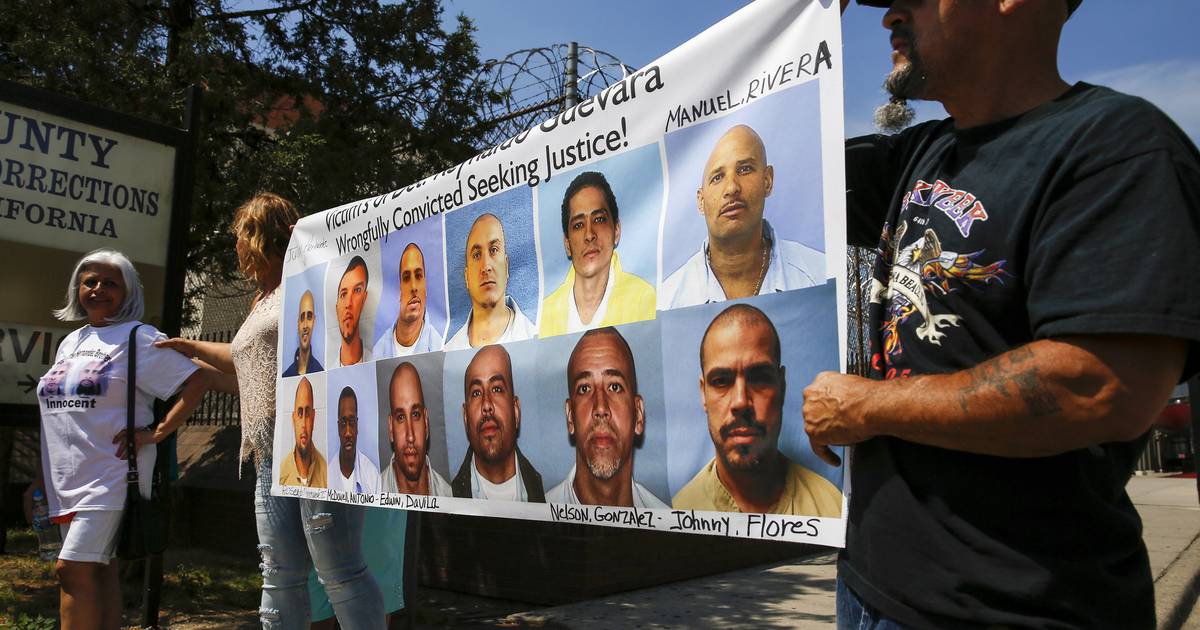 Two brothers were framed for a 1997 murder because a Chicago police detective who was secretly running an extensive narcotics ring thought one of them had stolen from one of his drug-world associates, attorneys for the brothers said in court Monday.

Juan and Rosendo Hernandez are hoping to win a new trial after 25 years in custody, alleging that drug-running police Officer Joseph Miedzianowski — once called “the most corrupt” officer ever prosecuted in northern Illinois — colluded with now-infamous former Detective Reynaldo Guevara to pin a Northwest Side murder on Juan Hernandez, with Rosendo getting caught up as collateral damage.

The hearing before Cook County Judge Joanne Rosado is expected to last at least through Tuesday. Attorneys for the Hernandez brothers want her to grant them new trials, while Cook County prosecutors argue that the brothers’ convictions are valid and should remain intact.

A key witness for the brothers, Frederick Rock, began testifying late Monday. Rock was charged federally as part of Miedzianowski’s drug enterprise and cooperated with federal authorities against the Chicago Police Department officer.

Testifying via videoconference from his native Dominica, to which he was deported after his federal conviction, Rock said he worked with Miedzianowski in the drug trade.

Miedzianowski had a vendetta against Juan Hernandez, nicknamed “Poochie,” because he believed Juan stole marijuana from a dealer he wanted to protect, Rock testified.

“He wanted (the marijuana) back or he’d make sure Poochie would get in trouble,” Rock said.

Miedzianowski introduced Guevara to Rock as “the officer who was going to help him get Poochie,” Rock testified. “He wanted to get Poochie no matter what the cost.”

On cross-examination, however, prosecutors got Rock to acknowledge that he never heard Miedzianowski explicitly give Guevara instructions. And in opening statements before Rosado, Assistant State’s Attorney Carol Rogala hinted Rock was not to be trusted.

“You’re not going to hear from Joe Miedzianowski that ‘I wanted to get Juan Hernandez and his family,’ ” Rogala said. “You’re going to hear from a convicted felon who has been deported and is beyond the reach of the American justice system.”

Attorneys for the brothers also said Monday that Guevara lied in police reports to weaken the brothers’ alibis, and “(put) his hands on the scale to get eyewitnesses to make identifications in absolutely impossible scenarios,” attorney Joshua Tepfer, who represents Rosendo Hernandez, said in court Monday.

In addition, attorneys for the brothers said they have found a witness who, one night in 1997, had a friend jump into his car to say he thought he had killed a rival gang member. That person said that someone threw a bike at his windshield as he was driving away from the shooting, which corroborates one eyewitness’ account that someone threw a bike at the shooter’s car, the brothers’ attorneys wrote in a court filing.

Cook County prosecutors, however, cautioned Judge Rosado not to lump this case in with other Guevara-related matters. The initial witness interviews were done by an entirely different set of detectives, and there are eyewitnesses who to this day will identify the brothers as the assailants, Rogala said.

Miedzianowski was convicted on federal charges including racketeering and drug conspiracy, accused of running a drug ring with national scope while wearing a CPD star. He is serving a life sentence in a federal prison downstate, according to Bureau of Prisons records.

Meanwhile, dozens of people have accused Guevara, now retired, of manipulating witnesses, fabricating evidence and framing suspects over the course of his career. He has repeatedly asserted his Fifth Amendment right to remain silent when questioned about the alleged wrongdoing. Multiple alleged wrongful convictions have been linked to Guevara and the city has faced lawsuits over the accusations against him.

The brothers’ first witness Monday was Daniel Violante, who testified he was in front of a Northwest Side gangway that night in 1997 next to his friend, Jorge Gonzalez. Two people came out of a nearby car, one of them pointed a gun at his stomach, and then he jumped over the fence and heard gunshots, Violante testified.

He came back and saw Gonzalez on the ground, bleeding.

On the witness stand Monday, Violante insisted that he never saw the faces of the people who killed his friend.

“Everything was black to me,” he said. “I didn’t see that face. … It happened fast. Too fast.”

At the brothers’ trials, however, Violante took the stand to identify them as the attackers. On Monday, he said he did so merely because the Gonzalez family had pointed them out, so he figured they must have done it.

A year after the shooting, Violante signed an affidavit saying he actually falsely accused the Hernandez brothers out of retaliation, and he wanted the charges to be dropped. Prosecutors have alleged that affidavit was the product of a brokered deal between two gangs, in which Violante would recant in exchange for another witness walking back his testimony in a separate case.

Violante denied that on the stand, and on cross-examination said someone merely showed up at his house with the affidavit already typewritten, and he signed it.

“Some guy just came to your house and asked you to sign it?” Rogala asked.