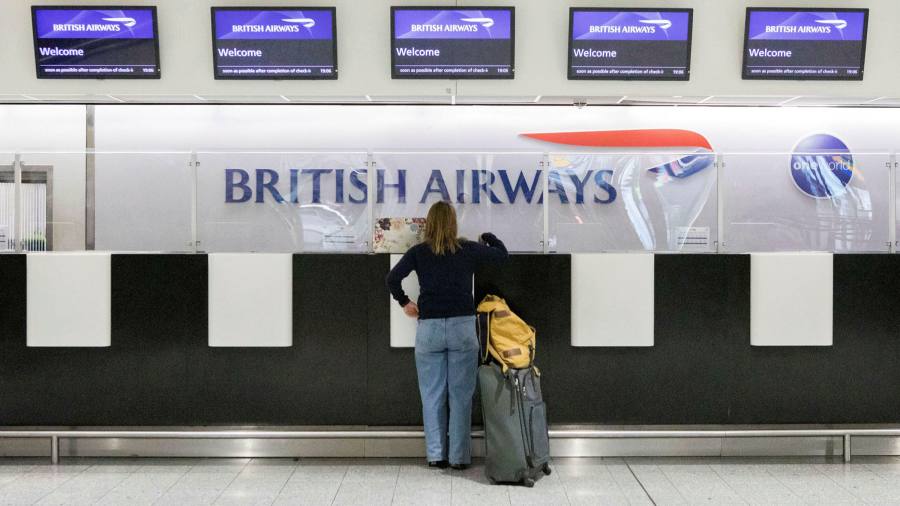 British Airways has avoided a damaging summer strike after agreeing a “vastly improved” pay deal, according to unions, a boost to the airline that has been forced to cancel thousands of flights this year.

The Unite union on Thursday said a dispute affecting check-in staff at London’s Heathrow airport “has been suspended” after the company made a new offer on pay. Staff will instead be balloted on the sweetened pay deal.

“We welcome that BA has finally listened to the voice of its check-in staff. Unite has repeatedly warned that pay disputes at BA were inevitable unless the company took our members’ legitimate grievances seriously,” said Unite general secretary Sharon Graham.

The GMB union, whose members were also set to strike, has agreed a deal with BA, according to a union official.

About 700 BA check-in crew at Heathrow had voted to strike last month, with unions promising “severe disruption” timed to coincide with the summer rush to fly abroad.

Unite said the pay offer from BA was “vastly improved” without disclosing further details. The union had demanded that pay be reinstated to its pre-pandemic level, following a 10 per cent cut imposed by BA when the industry was all but shut down by Covid-19 travel restrictions.

The airline said it was “very pleased” with the outcome, which came a day after it announced plans to cut another 10,300 flights this summer owing to staff shortages, taking the total number of cancellations this year to about 30,000.

BA was under extreme pressure to avoid a strike that could have thrown its operations into chaos on one of the busiest weekends of the year for travel, as schools break up for the summer.

But many other employers are also recognising that they will have to make concessions on pay to avoid bitter industrial disputes, especially in a tight labour market where recruitment is difficult.

Unite said separately on Thursday that it had won an additional 4 per cent salary increase for more than 17,000 of the lowest-paid staff at NatWest bank, which would be consolidated in base pay, and not a one-off lump sum.

It recently reached a deal for a similar top-up to salaries at Barclays, and a £1,000 bonus for staff at Lloyds Banking Group.

Meanwhile, a Bank of England survey published on Thursday showed two-thirds of employers were finding it “much harder” than normal to hire new staff, with average wage growth expected to remain above 5 per cent over the next 12 months — a level policymakers think is unsustainable.

Separately, a survey published on Friday by the Recruitment & Employment Confederation, the professional body for UK recruitment businesses, showed employers were still reporting worsening availability of candidates and sharp increases in starting salaries, even though the frenetic pace of hiring had slowed a little.

Mick Lynch, general secretary of the RMT rail workers’ union, said that Boris Johnson’s resignation raised the prospect of “months of chaos at the heart of government, which could seriously undermine the prospect of a settlement in the national rail dispute”.

On Thursday 2,000 RMT members at Govia Thameslink Railway voted to join industry-wide strikes, meaning the train operator is the 14th facing industrial action in a dispute over pay, conditions and job security.

Nadhim Zahawi, the new chancellor, has not given any firm signal on whether he might be prepared to fund more generous pay settlements for public sector workers than the 2-3 per cent offer currently factored into departmental funding plans.