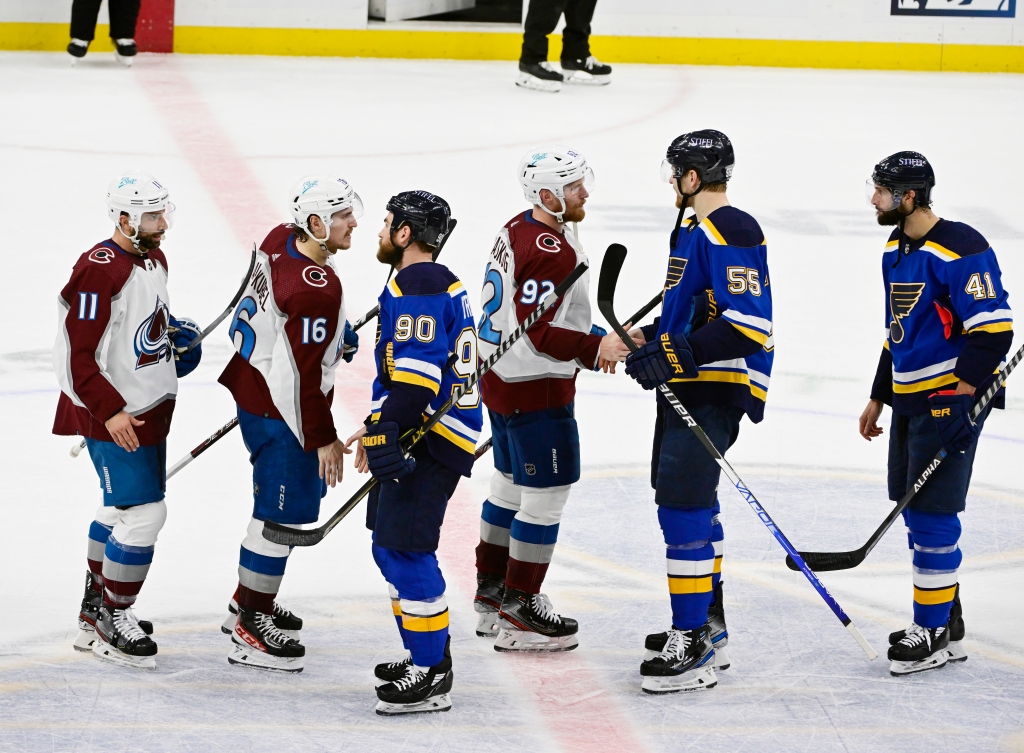 ST. LOUIS — You don’t think the Stanley Cup is a bucket full of bonkers? It took a career Detroit Red Wing to finally end the Avalanche’s second-round playoff curse.

“You know, when I signed (here), there were friends I’d made that lived in Detroit that kind of gave me a little bit of (crud),” Helm, the Avs’ fourth-line center, cracked after his game-winning goal against St. Louis here Friday night sent Colorado to its first Stanley Cup conference final since 2002. “(But) they’re happy to see me here, winning, seeing the team (be) successful.”

With 5.6 seconds left in a 2-2 game, Helm, who’d signed with the Avs after 14 seasons with the (boo) Wings (hiss), cocked his stick back with both hands from the left face-off circle.

In one mighty swing, the demons and ghosts that haunted Front Range hockey fans for two decades ran screeching from the Gateway City and into the cold ether of the night.

“(It felt like) almost relief,” Avs defenseman Josh Manson, another unsung hero and franchise newbie, recounted with a grin. “You’re so excited, but it’s like, ‘Thank goodness, it’s over. We did it.’”

Ding dong, the witch is dead. The voodoo. The hex. All of it.

“First thing I did was to check the clock,” goaltender Darcy Kuemper recalled. “And see how much time was left. They added a second there.”

Of course they did. That’s the thing about zombies who’ve been stalking a franchise for that long. They rarely go down without a fight.

Or without a few sacrifices along the way. The biggest of Game 6 might’ve come on a Blues power play 17:23 into the second frame.

Kuemper appeared to lose his footing to the left of his crease as the St. Louis attack approached, leaving the big goaltender helpless on his back a good two feet from a wide-open goal. Enter Manson, who plopped his 6-foot-3 frame into the net in Kuemper’s stead to combat Jordan Kyrou’s wrister.

Manson’s chest served as the only barrier between the Avs and a 3-1 deficit to close out the second period. Colorado killed the penalty.

Those zombies don’t go down without a team effort. Such as J.T. Compher cleaning up some Blues garbage six minutes into the second frame, poking in a deflection in the crease that Villo Husso had failed to catch cleanly to knot the game at 1-1.

No. 37 came to the rescue again midway through the third with a breakaway wrister from the right faceoff circle that tied it up again, this time at 2-2, at the end of a power play.

What drove Avs fans nuts Friday wasn’t the team’s heart. It was the occasional slop.

It was turnovers in the offensive zone. It was Jack Johnson mishandling the puck at his blue line midway through the second period, only to have the Blues pounce, then speed off with it the other direction on a break that ends with a Kyrou goal and a 2-1 Blues cushion.

It was about hanging in there anyway.

The Stanley Cup Playoffs, at their core, are basically an HBO Max mini-series — and not the kind you’d let your kids watch. It gives us subplots. Violence. Language. Intrigue. Stars. Villains. Bad breaks. Misdirections. Mid-season twists.

Main characters, characters you grew to love right out of the chute, suddenly drop off along the way. The hope at the starting line becomes a savage war of attrition, team sports’ most grueling marathon. There are no prisoners. Only scars. For life.

“You have to move on,” Avs veteran Andrew Cogliano said after morning skate Friday. “I think that’s the (key). It’s cliche, but, you know, feeling sorry for yourself in the playoffs is death.”

And, just like that, Colorado’s Stanley Cup dreams have new life.

“You could tell the belief was there,” Bednar said.

What did you say to him after that chest-save anyway, Darce?

“Thank you,” the goaltender said with a grin.

“The best,” captain Gabe Landeskog said, “is ahead.”

And the beast is dead.

“We know what we’ve got in the dressing room,” Helm said. “We know if we stick to the game plan, just stay with it, that good things are going to happen.”

On this day 13 years ago, Helm scored the game-winner to send the Evil Empire past Chicago in overtime and send the Wings to the Stanley Cup Finals. Funny game, this.

“And it’s my mom’s birthday (Saturday), so there you go,” the Avs’ fourth-line center said. “Happy Birthday, Mom.”