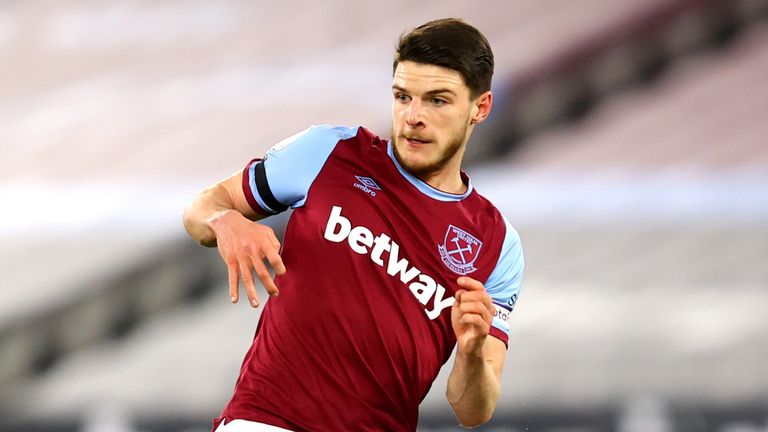 Team news, stats and prediction ahead of Brighton vs West Ham in the Premier League on Saturday, live on Sky Sports (kick-off 8pm).

Brighton will be without both Lewis Dunk and Neal Maupay for Saturday’s Premier League visit of West Ham.

The pair were shown red cards in the defeat at Wolves last time out and serve a ban this weekend.

Solly March (knee) and Tariq Lamptey (hamstring) are also out with doubts over Davy Propper (ankle) and Joel Veltman (calf) – although Adam Lallana should be fit following his own calf issue.

Declan Rice could return for West Ham after six weeks out with a knee injury. Aaron Cresswell should also be fit despite limping off in last weekend’s defeat by Everton.

Brighton vs West Ham will be shown live on Sky Sports Premier League and Main Event from 7.30pm; kick-off 8pm. Sky Sports customers can watch in-game clips in the live match blog on the Sky Sports website and app. Highlights will also be published on the Sky Sports digital platforms and the Sky Sports Football YouTube channel shortly after the final whistle.

The door has come ajar again for West Ham in their pursuit of a top-four finish but this isn’t an ideal fixture.

Expectation will be on them here to leave with three points but in truth, there really isn’t much between the teams despite their league positions. Brighton are underrated, West Ham overrated. Plus, the Hammers looked quite clueless in the final third when tasked with breaking down a well-organised back five against Everton. They will face a similar problem here.

I was keen on backing the hosts but yet again the markets have them firmly on side with only 15/8 with Sky Bet available.

With such little juice in the outright match prices, my eyes have wandered to the shots market where I’ll be backing my old friend Yves Bissouma. Punts on him to score in recent weeks have gone astray but he’s been peppering the opposition goal with efforts that have admittedly varied in quality.

But that’s the beauty with backing these type of shots bets, it doesn’t matter if it’s blocked, speculative or downright rubbish, a shot is a shot. The Evens for him to fire two shots at goal, something he’s done in four of his last five matches, is appealing.

Back in genuine contention to qualify for the Champions League after Arsenal’s win at Chelsea?

Yes, but David Moyes’ side still have plenty of work to do if they are to reach the top four: although they have a game in hand on their London rivals, West Ham are still six points behind Chelsea.

West Ham are still eight points behind Leicester with three games to go – meaning that only three wins out of three will be sufficient to give them any chance of finishing above Brendan Rodgers’ side.

Behind West Ham, Tottenham and Everton are both two points shy of the Hammers having played the same number of games.

And they remain in contention for a place in the Europa Conference League if they finish best of the rest among sides not qualified for the Champions League or Europa League.