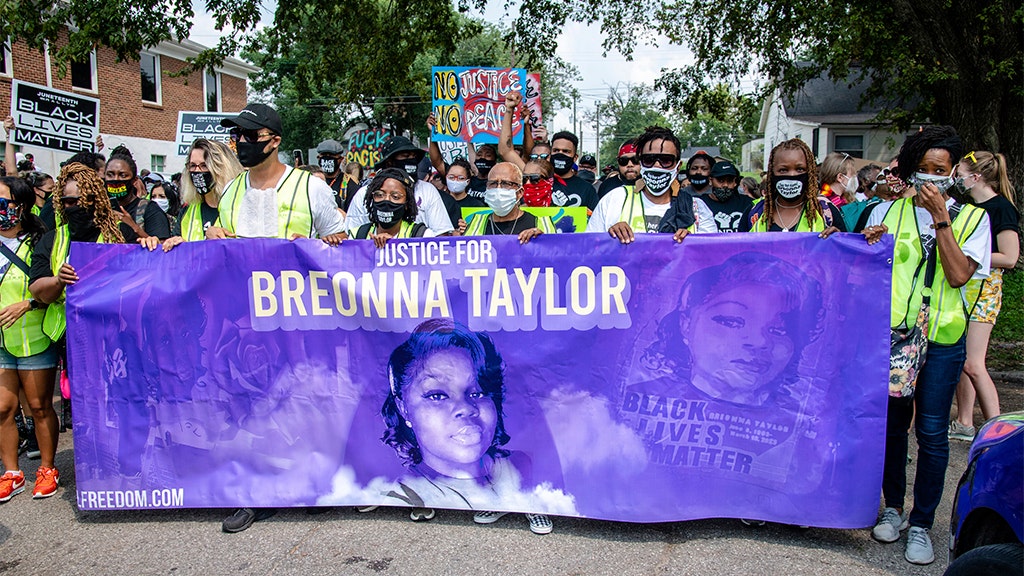 A protest in Louisville, Kentucky, on Saturday night, on the one-year anniversary of the death of Breonna Taylor, was declared an unlawful assembly, according to police.

Some protesters, “while armed,” blocked vehicular traffic and forced motorists to turn around, the Louisville Metro Police Department wrote in a Twitter message.

“Arrests will be made to those that refuse to disperse,” the police message said.

The tweet included a photo of protesters gathered along the city’s Ohio River waterfront.

No arrests had been made as of 11 p.m., police spokesman Dwight Mitchell told Louisville FOX station WDRB-TV. He added that police had not needed to use tear gas or any other chemical agents on the crowd.

A woman who was seen handcuffed by police was later released, according to the FOX station.

Earlier in the evening, Louisville Mayor Greg Fischer had thanked the crowd for being peaceful during the weekend’s demonstrations.

“Breonna’s death devastated her family, friends and coworkers, and it has deeply shaken our community and our country,” the mayor said, according to the Courier-Journal of Louisville. “Her death, along with those of George Floyd, Ahmaud Arbery and too many others, serve as painful reminders for Black Americans of the injustice, discrimination and violence they’ve faced for centuries – and too often still face today.”

“Breonna Taylor’s death was a tragedy, a blow to her family, her community, and America,” Biden wrote. “As we continue to mourn her, we must press ahead to pass meaningful police reform in Congress. I remain committed to signing a landmark reform bill into law.”

Gatherings were held in Louisville and other cities across the U.S. as protesters pushed for authorities to prosecute police officers who were involved in a raid at Taylor’s home on March 13, 2020, that resulted in the shooting death of the 26-year-old woman.

“Until a jury trial tells us that these officers are not guilty, there’s always time to indict, arrest and convict the cops that murdered Breonna Taylor,” attorney Lonita Baker, one of the lawyers involved in a wrongful death lawsuit filed by Taylor’s family, said at an afternoon rally at Jefferson Square Park, according to WDRB.

During the raid, Taylor was struck by six shots and died in her hallway as police confronted her boyfriend, Kenneth Walker, who told authorities afterward that he fired at police, thinking the officers were intruders trying to break into the home.

Walker has since been cleared of wrongdoing and three police officers linked to the raid have been fired but none has faced criminal charges, WDRB reported.

Former Det. Brett Hankison was charged with wanton endangerment last September for firing into an apartment next to Taylor’s and showing “extreme indifference to human life.”

A man, a pregnant woman and a child were inside the other apartment at the time, authorities have said.

In September, Taylor’s family reached a $12 million settlement with the city in a separate legal case. The terms included the city’s pledge to make changes in police policies and procedures.

“The department places the highest priority on conducting thorough and impartial investigations, and the complaints received from Ms. Palmer’s attorney are no exception,” the LMPD told Fox News in a statement. “We are committed to being as transparent as possible within the confines of those limitations outlined by law of the Commonwealth.”