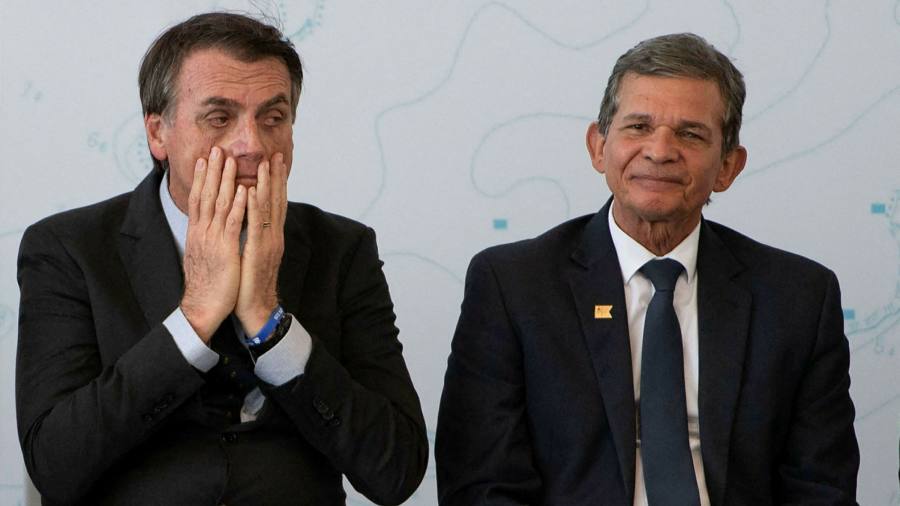 Brazilian oil producer Petrobras was plunged into turmoil after the country’s president Jair Bolsonaro abruptly announced a plan to replace its chief executive with an army general following protests earlier this year by truckers over fuel prices.

The rightwing populist leader took to social media on Friday night to announce that his government intended to remove Roberto Castello Branco from the top of the state-controlled group, marking a rapid escalation in a disagreement with the administration.

His place is set to be taken by Joaquim Silva e Luna, a general in the reserve army who was defence minister under former president Michel Temer.

The decision came less than a day after Bolsonaro publicly criticised Castello Branco for raising fuel prices and warned there would be changes at Petrobras, remarks that sent the company’s São Paulo-listed preferred shares down 6.6 per cent on Friday.

It is likely to raise concerns among international investors of a more interventionist approach to Brazil’s economy and could throw into question the government’s stated aim of pursuing privatisations of other state-owned enterprises or shareholdings.

Petrobras said it had received a letter from the ministry of mines and energy requesting an extraordinary general meeting for the appointment, adding that the chief executive’s mandate would expire on March 21.

The Brazilian state owns a 36.8 per cent stake in Petrobras, but 50.5 per cent of voting rights. The news agency Reuters reported late on Friday night that the company’s executive management was considering resigning en masse in the wake of the decision.

Petróleo Brasileiro, as the group is formally known, was viewed as a test case for the pro-market reform agenda of economy minister Paulo Guedes, who has largely struggled to implement meaningful change since Bolsonaro’s administration took office two years ago.

Behind the sudden firing of the Petrobras chief executive was the company’s policy to set petrol and diesel prices in line with the international market. Threats of nationwide strikes by lorry drivers earlier this year were partly called off after Bolsonaro, a former army captain, personally interceded to calm the situation.

But Petrobras’ decision to raise fuel prices again this week infuriated the president, who on Thursday night pledged to suspend federal taxes on diesel for two months from March.

Upon taking the top post at Petrobras two years ago, Castello Branco vowed to keep it free from political interference, telling the Financial Times that “we don’t want to return to this past”.

The University of Chicago-educated executive estimated that efforts by the former Dilma Rousseff government to subsidise diesel prices cost Petrobras some $40bn, contributing substantially to a debt pile that the company is still struggling to reduce.

For analysts, maintaining and bolstering the board’s independence was seen as crucial to rehabilitating the company’s image in the eyes of investors.

For much of the past decade, it was at the centre of Brazil’s Car Wash corruption investigation, which uncovered a vast contracts-for-kickbacks scheme involving scores of politicians and businessmen, including executives at Petrobras.

“[The removal of Castello Branco] will have a great impact on the company’s value and on its medium and long-term credibility,” said Claudio Porto, founder of energy consultancy Macroplan. “The prognosis is a very prolonged downward bias.”