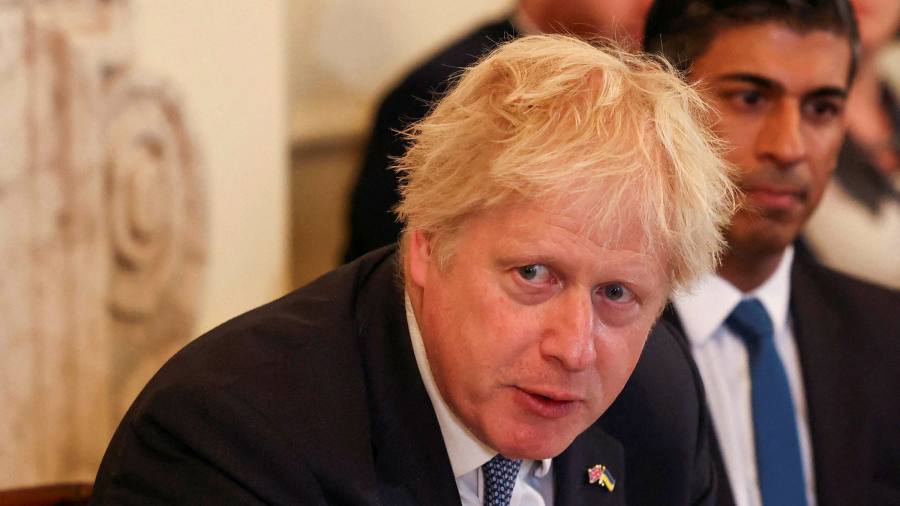 Good morning. Thanks for voting in our poll — about three-quarters of you think it’s time for a windfall tax on the energy groups. That contrasts with the view around the cabinet table, where Rishi Sunak is under pressure to cut rather than raise taxes. That internal row is going to run and run. Get in touch at the below email address.

Sue Gray’s The Winds of Winter

The Metropolitan Police have closed their investigation into lockdown breaches in Downing Street and Whitehall, after issuing 126 fines to 83 people. They confirmed the prime minister wouldn’t be hit with further fines. This paves the way for the long-awaited publication of civil servant Sue Gray’s report on the partygate scandal, which is expected next week.

How much does any of this matter politically? Not at all. Boris Johnson has already seen his personal approval ratings slump, suffered defeat in the rock-solid safe seat of North Shropshire and 485 Conservative councillors across the United Kingdom have lost their seats.

The biggest reason why the prime minister is still in office is, still, that none of the Tory contenders to replace him have persuaded Conservative MPs that they are an obvious upgrade.

It’s hard to see an outcome from the police investigation into Sir Keir Starmer that is helpful for Johnson: either the Labour leader avoids a fine, a handy contrast for Starmer, or Starmer is replaced by a new and fresh leader right in time for the parliament’s final phase, which is not exactly great news from a Tory perspective. But the biggest direct threat to the prime minister is not some change in Labour fortunes but that one of his internal rivals establishes themselves as a compelling alternative.

Over at the Times, my former colleague Patrick Maguire reveals that the Cabinet Office is splitting into two halves, with large chunks of the department now reporting directly to Downing Street’s new permanent secretary Samantha Jones. According to an email to civil servants, the new arrangement is designed to “enhance the support that is being offered to the Prime Minister and to the cabinet”.

The office of the UK prime minister has long been underpowered compared with most heads of governments, but the problem is particularly acute under Boris Johnson, because whether as Mayor of London or as editor of The Spectator, he has always relied on powerful deputies to enforce (and in some cases, anticipate) his will.

This move satisfies Johnson’s promise to his MPs to beef up his Downing Street operation. There are two pieces worth reading on this. The first is Andrew Hill’s column on organisational culture back in February, just after the first report into rule-breaking parties landed:

There was an echo of “stop me before I kill again” in last week’s promise by Boris Johnson to create an “office of the prime minister” to bring order to Number 10 Downing Street.

As Andrew argues, reforming an organisation’s structures to improve outcomes is a good idea. But a change in an organisation’s culture can only be driven through by an astute and effective leader. What it can’t do is make up for the absence of that leader.

The second is a longer piece by Alex Thomas, programme director at the Institute for Government. He warned that beefing up Downing Street might actually have the reverse effect to that intended:

Management between departments will be more fragile and ministers and officials will take direction from the corporate centre less seriously. The departure of Michael Gove and the demands on Steve Barclay’s time have already seen political momentum behind reform fade.

The Conservatives badly need this to work. The next election is not in the grand scheme of things all that far away, and the government’s record of achievement outside the vaccine rollout is pretty thin. Johnson’s third Downing Street shake-up needs to succeed where his first two failed, and fast.

Organising government and making it representative can be a thorny mission. That’s why the Financial Times has launched an essay competition for school students, as part of its free schools access programme, which invites them to pose suggestions on how to make parliament representative. Winners will be published in the FT and the Political Studies Association’s Political Insight magazine — deadline for entries is May 25.

The tie is dead, but the suit is alive. That’s the view of Gildo Zegna, head of the Italian luxury fashion house Zegna, speaking at the FT’s Business of Luxury summit. It’s as good a reason as any to read Unhedged’s Rob Armstrong’s astute and funny eulogy for the necktie.

I am thinking a lot about what to wear this weekend: I am at a wedding on the Saturday, and (shameless self-promotion klaxon!) on Sunday at 18:00 I am appearing on Andrew Neil’s new Channel 4 show. Also in the room: George Osborne and Ed Balls. Tune in to find out which of us has turned up in a tie.

Whatever you do, have a lovely weekend.