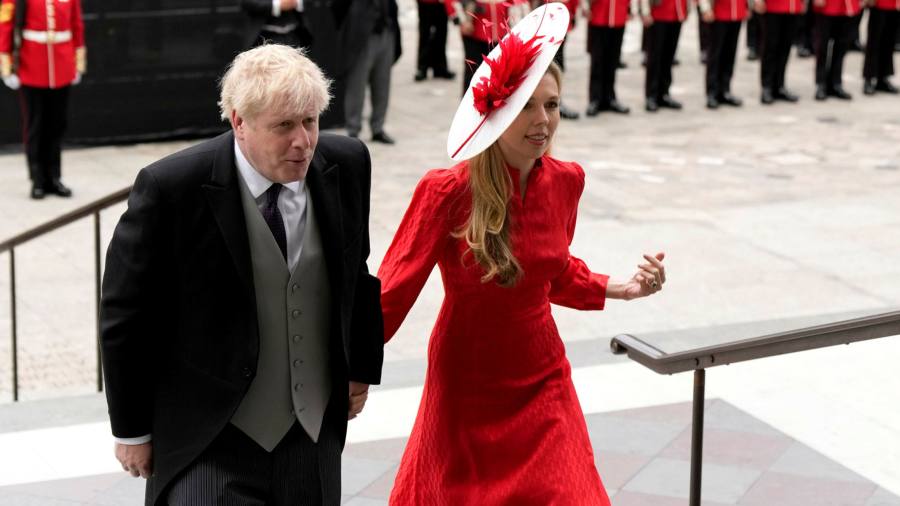 Boris Johnson’s allies have claimed that some rebel Conservative MPs seeking to oust him from Number 10 want to move Britain back into the orbit of Brussels, as the prime minister’s problems deepened on Friday.

Johnson was booed and jeered by sections of a flag-waving crowd as he arrived at St Paul’s Cathedral in London for a thanksgiving service for the Queen’s platinum jubilee.

The prime minister’s supporters tried to rally support for him by highlighting an article by Tobias Ellwood, the former Tory defence minister, who said Britain should return to the EU single market to cut living costs, boost trade and remove border friction in Northern Ireland.

One minister close to Johnson said the article this week by Ellwood — who has withdrawn his support for the prime minister — exposed a pro-EU subplot to attempts to eject him from Downing Street: “Tobias has slightly given the game away.”

Simon Clarke, Treasury minister, said on Twitter: “Single market membership would extinguish half the freedoms that make Brexit so important and Boris is the principal reason we were able to escape it.”

Lord David Frost, former Brexit minister, said of Ellwood: “Brexit really is not safe in his hands or his allies.”

However, a ministerial ally of Johnson admitted that many of the 30 or so Tory MPs who have called for the prime minister to resign are not motivated by a desire for Brexit revenge.

More than half of those calling for Johnson to quit are Brexiters, including some of the biggest names in the Leave campaign: former ministers David Davis, Steve Baker and Andrea Leadsom.

But one pro-European Tory MP told the FT that Ellwood’s comments had “given Number 10 the excuse” to try to claim that bitter former Remain campaigners were agitating to remove Johnson.

Tom Tugendhat, the pro-European chair of the Commons foreign affairs committee and seen as a potential Tory leadership contender, was quick to close down any suggestion that a return to the EU single market was on the cards.

“Tobias is wrong,” he tweeted. “The single market puts the EU in charge: EU rules, open borders, no new trade deals. We need a deal British people control, not foreign laws with no say. Let’s plan for the future and stop looking back. This decision is made.”

Some rebel Tories believe Johnson could face a vote of no confidence in his leadership as early as next week: some 54 MPs have to write to Sir Graham Brady, chair of the 1922 committee of backbench Conservatives, to trigger such a ballot.

But Downing Street insiders believe Johnson is not yet “in the danger zone”. One colleague of Johnson said: “Unless and until the threshold is crossed the PM is focusing on the real challenges of his job, not theoretical issues.”

Johnson’s position was not helped on Friday when a crowd of royal well-wishers jeered and booed the prime minister as he arrived at St Paul’s with his wife Carrie.

Although some members of the crowd also cheered the prime minister, the incident illustrated how divisive a figure he has become.

“People who turn up for royal jubilees are normally Tory voters,” said one Conservative MP. “The PM would have to have a skin as thick as a rhino — and his advisers must be as thick as porridge — not to realise what’s going on.”

The criticism of Johnson’s leadership continued. Ed Costello, head of the Grassroots Conservatives organisation, which represents rank-and-file Tory members, told the Daily Telegraph: “I’ve come to the conclusion that he probably should resign, and if he had any sense he would resign before he was pushed.”