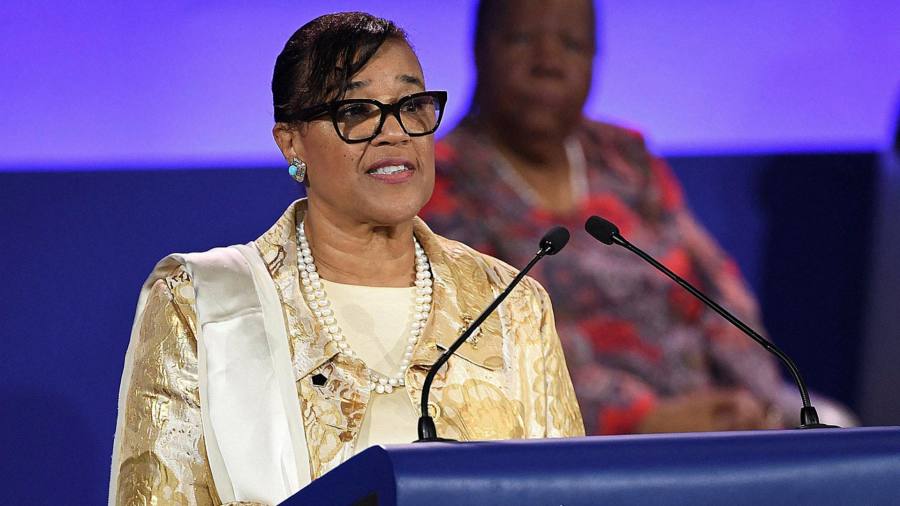 Lady Patricia Scotland, secretary-general of the Commonwealth, has seen off an attempt led by UK prime minister Boris Johnson to replace her as leader of the 54-country organisation.

The British peer, a former Labour attorney-general, won by 27 to 24 a vote of member country leaders on whether she should continue in the prominent role for another two years.

The news is another blow to Johnson’s political credibility on a day when his Conservative party lost two key by-elections in England and the party chair resigned.

Scotland had been up against Jamaica’s foreign minister, Kamina Johnson Smith, who was publicly backed by the UK and India.

Her victory at the Commonwealth heads of government meeting in Rwanda came at the end of a showdown meeting on Friday afternoon, which ran over by several hours as leaders struggled to break the impasse through two rounds of voting.

Johnson praised Baroness Scotland’s work in a speech in Rwanda earlier in the week.

However, UK officials had privately briefed against her, saying she had not provided effective or unified leadership since she was first appointed in 2016. They also pointed to £600,000 of money spent by the Commonwealth on employment tribunal costs during her tenure.

But Scotland’s allies argued that this expenditure reflected a period of financial turmoil for the organisation when it had to make big savings, involving redundancies.

The BBC revealed earlier this year that the Commonwealth Secretariat, led by Scotland, had been criticised for allegedly suppressing an independent review of its finances.

But allies of the secretary-general have accused Johnson of running a politically motivated “vendetta” against her because of her independence.

Scotland has been criticised by some newspapers for lavish spending on the grace-and-favour property she occupies in Mayfair, London. But that spending was commissioned before she took up the role in 2016, according to her allies.

Her first four-year term concluded in 2020, at which point Johnson canvassed Commonwealth leaders on replacing her. However, she stayed in position during the tumult of the Covid-19 crisis. The Commonwealth summit in Rwanda, originally scheduled for June 2020, was repeatedly delayed.

“It is deeply humbling to have been reappointed as secretary-general of this great Commonwealth. To continue to serve our family of nations is a true honour,” Scotland said.

Speaking earlier at a press conference in Kigali, Johnson tried to maintain that the defeat of his favoured candidate was “a good day for democracy”.

“What is the Commonwealth? It is an amazing group of 54 countries that share values and, in particular, the idea of democracy and I work well with Baroness Scotland, have done for a very long time . . . and look forward to working with her well in the coming years,” he said.