Book review of This Will Not Pass: Trump, Biden, and the Battle for America’s Future by Jonathan Martin and Alexander Burns 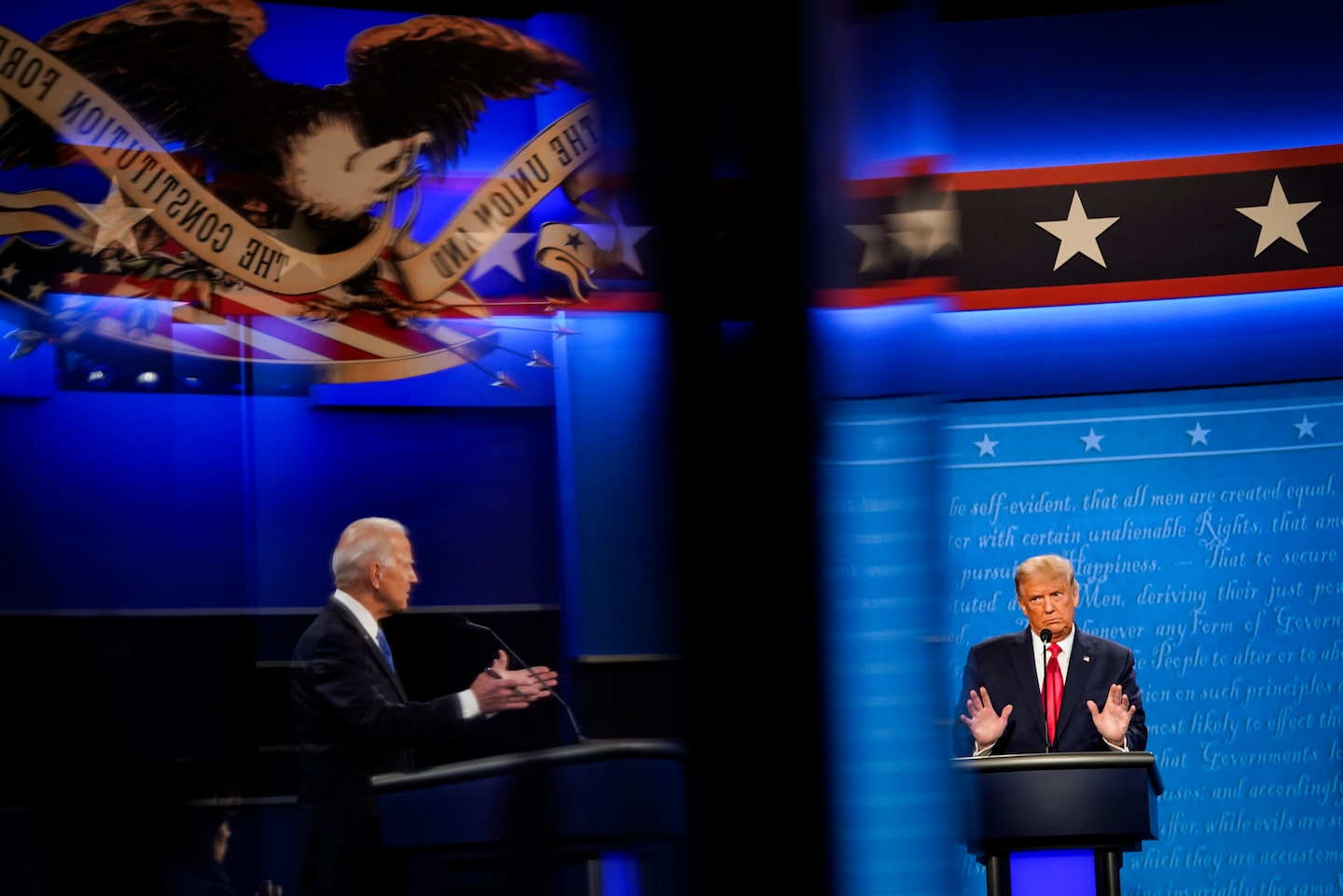 A week after the 2020 election, an argument broke out among Democratic lawmakers over why the party had fallen so far short of expectations. Democrats had banked on capturing more than a dozen new House seats but instead lost 13. Moderates like Rep. Abigail Spanberger (Va.) and progressives like Rep. Alexandria Ocasio-Cortez (N.Y.) engaged in a serious — and public — debate over the tactics and ideas that had dissipated support for Democrats. Press accounts portrayed the two sides, and the two women, as locked in battle, combatants in the opening salvo of a civil war in the Democratic Party.

Two months later, the women would live through a real battle. In early January, Spanberger called Ocasio-Cortez with a warning. In a few days, Congress would meet to certify the presidential election. But two months of lies emanating from the Trump White House were set to culminate in a protest headlined by the president, timed to coincide with the election certification. The routine electoral procedure had the potential to turn violent, which could be particularly dangerous for a high-profile legislator like Ocasio-Cortez. “You’re a very recognizable target,” Spanberger explained. “Wear sneakers, dress down — don’t look like you.” A few days later, both women would be caught up in the violence: Spanberger was trapped in the House chamber when rioters breached the Capitol, while Ocasio-Cortez barricaded herself in her office, terrified that she would be raped and killed by the mob.

These discordant stories — one about the everyday politics of the Democratic Party, the other about Donald Trump and the GOP’s extraordinary efforts to hold on to power — are the subject of “This Will Not Pass: Trump, Biden, and the Battle for America’s Future” by New York Times reporters Jonathan Martin and Alexander Burns. The book spans two years, from the arrival of the coronavirus pandemic in the United States through the first year of Joe Biden’s presidency. Bouncing between rapidly radicalizing Republicans and business-as-usual Democrats, it tells a story of an unprecedented attack on democracy and a system distinctly unsuited to respond. The overriding message — that democracy is in as much danger today as it was when rioters smashed their way into the U.S. Capitol — comes through with startling clarity.

“This Will Not Pass” charts the path of two parties and two presidencies at a moment when the democratic system in the United States was becoming increasingly fragile — when, in fact, Trump and his allies in the Republican Party were increasingly committed to dismantling it. Martin and Burns divide that story into three parts: the pre-election period starting in March 2020, when Biden emerged as the Democratic nominee and the coronavirus pandemic upended the presidential race; the long election period, stretching from early November to the Jan. 6 insurrection; and the first year of Biden’s presidency, when the Democrats were challenged to put the country back together and the Republicans were challenged to do anything — anything at all — about the act of terror that marked the end of Trump’s presidency.

The two storylines — Trump’s efforts to remain in office at any cost and Biden’s efforts to rebuild democratic institutions and respond to the pandemic — overlap only at dramatic moments like the insurrection at the Capitol, when lawmakers from both parties were under threat and in close proximity. There are glimpses of what unity in that moment might look like. Martin and Burns reveal that House Minority Leader Kevin McCarthy (R-Calif.) was far more shaken than he publicly appeared; a few days after the insurrection, he told Republican lawmakers that he would urge Trump to resign. In the run-up to their book’s release, Martin and Burns reported on the comments, then released an audio recording when McCarthy denied making the remarks.

McCarthy’s denials and defense of his comments underscore what was already evident on Jan. 6: that Republicans would not be partners in recovering from the crises Biden would face in office, because they were active agents of those crises. While the insurrection unfolded, some Republican lawmakers refused to wear masks at the request of their Democratic colleagues; a few hours later, with blood still drying on the floor of the Capitol, 147 Republicans refused to certify the election results.

Apart from the insurrection, the two storylines are notable for how divergent they are. The Republican story is one of high drama mixed with Trumpian farce (the Four Seasons Total Landscaping news conference makes an appearance, as does presidential lawyer Rudy Giuliani’s hair dye). Alongside this, the mostly-routine politics of the Democratic story are jarring. The authors play up run-of-the-mill political stories, such as the careful negotiations between Biden and more progressive Democrats over bankruptcy reform and pandemic relief, and the tensions in the West Wing over the White House role of Vice President Harris. Martin and Burns reveal that Jill Biden was upset that Harris was being considered for the vice presidency after she attacked Joe Biden during a primary debate for touting his past work with segregationists. And Harris, the authors report, grew frustrated once she was in office that she did not have more responsibility (a feeling most vice presidents share).

These kinds of gossipy insider tidbits are the meat of campaign books, such as John Heilemann and Mark Halperin’s “Game Change,” about the 2008 election, and “Double Down,” about the 2012 vote. Set against the relentless attacks on the democratic process coming from the right after the 2020 election, though, they seem like trivial distractions.

But that disjuncture is itself revelatory. One of the questions Martin and Burns want to answer is how institutions, including the Democratic Party and the Biden administration, weather the attacks on democracy, how well they adapt and respond. And at least in this telling, the answer is: not very well. Even as Biden navigated the campaign and election, emerging as a reassuring and stable presence in the wild days of 2020 and early 2021, his political approach seemed to hark back to an earlier era that praised comity among lawmakers and fetishized partisanship.

After reading “This Will Not Pass,” I was tempted to conclude that, despite Republican promises to make America great again, it is the Democratic leadership that is dedicated to a nostalgic view of politics. Surveying the first year of the Biden administration and its commitment to seek out bipartisan deals and lean on the decades-long friendships Biden had built in the Senate, Martin and Burns suggest that the president’s first-year victories “appeared to be the work not of a rising new electoral majority, but of long-entrenched Democratic leaders who came of age in the 1960s,” with “methods and instincts [that] appeared in many cases painfully mismatched to the merciless politics of 2021.”

Released at a time when those politics have continually fallen short, when the attacks on democracy have moved to state legislatures as Trump and his team plot their comeback in 2024, this book may have landed too soon to answer the questions that Martin and Burns care about most. At the start of “This Will Not Pass,” the authors ask whether, in the face of cascading and compounding crises, the United States could successfully navigate the political emergency with its basic institutions and democratic system intact. Their answer — “a resounding: sort of” — reveals the limits of writing such a book in the midst of a crisis. A more accurate answer would be “so far, and barely.”

Nicole Hemmer is an associate research scholar at Columbia University and the author of “Messengers of the Right: Conservative Media and the Transformation of American Politics.” She is a co-founder of The Washington Post’s daily historical analysis section, Made by History.

Trump, Biden, and the Battle for America’s Future

By Jonathan Martin and Alexander Burns

David Harbour and Jodie Comer are Starring in a Horror Game

‘Who is going to buy?’ UK set to unleash historic debt deluge