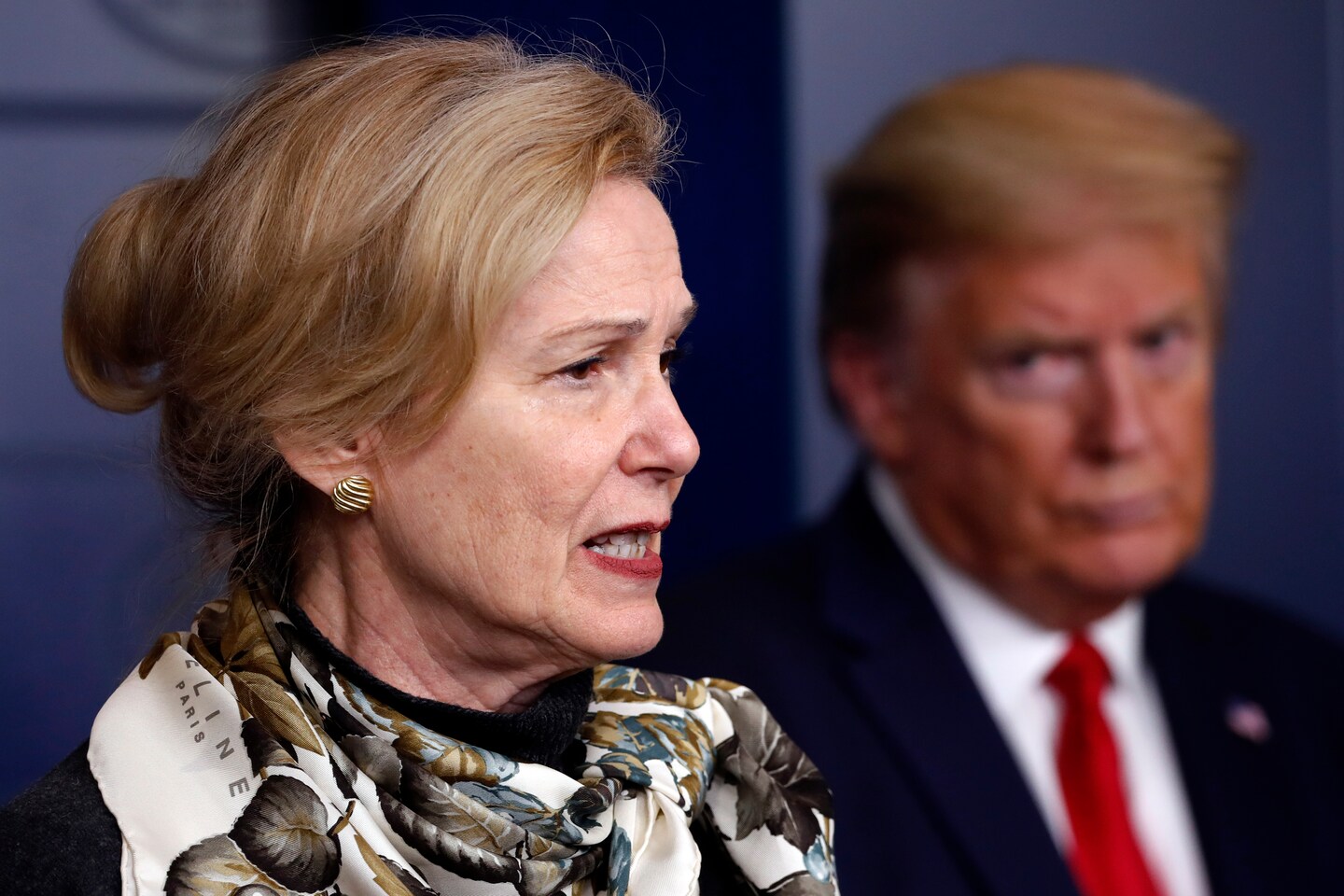 On April 23, 2020, with the United States in the throes of the first covid-19 wave, President Donald Trump opined that doctors should investigate whether shining ultraviolet light or injecting disinfectant into the body might treat the disease. To back him up, he turned to the White House coronavirus response coordinator, the physician and public health expert Deborah Birx.

“Deborah, have you ever heard of that — the heat and the light … relative to this virus?”

Birx, though visibly uncomfortable, answered politely, “Not as a treatment.” She went on to say that fever does help the body fight infection. She managed to add, “But I’ve not seen heat or light —” before Trump interrupted her. I was a physician then on the front lines of the pandemic in a New York City intensive care unit, and I felt angry at Birx when I saw that clip. Her tepid response made me think she was more concerned with avoiding the rage of her mercurial boss than with protecting the American people.

With her new book, “Silent Invasion: The Untold Story of the Trump Administration, Covid-19, and Preventing the Next Pandemic Before It’s Too Late,” Birx offers her side of the story with a detailed account of her quest to ensure that the White House’s pandemic response was grounded first and foremost in rigorous scientific data.

Before joining the Coronavirus Task Force, Birx led the President’s Emergency Plan for AIDS Relief, a position she was appointed to by President Barack Obama in 2014. She managed a $6 billion budget with the goal of reducing deaths caused by AIDS worldwide, particularly in sub-Saharan Africa. A colonel in the U.S. Army, Birx knew how to fight pandemics with military rigor.

When initially approached to join the White House coronavirus response team, Birx declined. She was committed to her work in Africa. But when in February 2020 she had reason to believe that the administration wasn’t taking the threat seriously, she felt compelled to serve.

Birx devotes much of the book to “silent spread,” the idea that from the earliest days of the pandemic the virus was being transmitted among people who had no symptoms of infection, allowing it to rapidly spread undetected. She comes across as a Cassandra-like figure, not believed by even the Centers for Disease Control and Prevention until months into the pandemic.

Not long into her tenure, the White House communications team limited her appearances on national television, which TV-obsessed Trump might see and fume over. Committed to spreading her message of masking indoors, limiting the size of social gatherings and testing widely, Birx instead took numerous interviews on local news. When, in August 2020, she was granted an exception to do an interview on CNN, she warned the American people that the virus was “extraordinarily widespread.”

The next morning the president called her. “Who did this? Who in Comms let you do this?” she recounts him asking. He then accused Birx of spreading “fake news” and repeated the lie he wanted her to abide by: that the virus was under control.

The question at the heart of “Silent Invasion” (though Birx does not explicitly frame the book this way) is how a morally grounded and competent person like Birx made sense of her place in the administration of such a morally bankrupt and incompetent president.

Birx maintains that in many cases the actions the administration took to combat the pandemic were at odds with Trump’s fact-denying, inflammatory remarks. From working with heads of state on AIDS policy in numerous African nations, she had experience with leaders saying one thing for political gain and doing another for practical outcome. And it was with that quiet, behind-the-scenes work that she felt she could have the most sway.

Early in her tenure, Birx believed that if she only presented the data clearly enough, she could persuade Trump and those around him to change their minds. Describing her first months at the White House, she writes, “I often felt I was just one chart, one statistic, one direct meeting with the president away from getting him back on my side.” Later she explains, “If I was guilty of one thing during my tenure at the White House, it is that, for too long, I clung to the notion that reasonable, intelligent people would eventually see the light.” This is an important insight into herself (though it remains unclear what made her think Trump was a reasonable person).

Birx explains that leaving her position, though she considered it, was against her ethics. In military fashion, this was the mission she had accepted, and she would see it through. Leaving would give her a chance to expose the administration’s failures, but in her data-driven calculus, despite “overwhelming sadness and frustration,” she would save more lives by staying.

She didn’t direct her most meaningful contributions to our television screens, because she realized she had to operate differently. She sought impact through quiet subversion and subterfuge. When told she could not make recommendations to governors on how to limit viral spread, she took her recommendations out of attention-grabbing bullet points in her memo and put them in paragraphs that no one at the White House was diligent enough to notice. She privately told Vice President Mike Pence that the president’s message on the coronavirus was wrong and that she needed to go to the governors and contradict the president. The vice president did not object, so Birx went on a road trip to speak face to face with governors around the country.

Back at the White House, perhaps the gravest threat to a science-based pandemic response was Scott Atlas, the Stanford radiologist who won the president’s favor by touting coronavirus misinformation. Birx worked to keep his dangerous views from spreading by surreptitiously partnering with the communications team to block him from giving official interviews. Apparently desperate for media coverage, Atlas did himself in when he gave an unapproved interview on White House grounds that was aired on Russian state television. After that, he was sidelined. We’ll never know what would have happened had Birx not put herself between Atlas and the American public. Her strategy of muting Atlas worked the way so many effective public health measures do: It was unnoticed and unsung, yet achieved exactly what it set out to do.

Not everyone will agree with Brix’s ethical analysis. And there were points in the book when I wished she had delved deeper into her moral reasoning. But even so, “Silent Invasion” prompted me to reconsider what it means to stay true to one’s values in an impossible situation. It’s tempting to think that the heroic thing is to take a defiant stance on national television. And sometimes it is. But there’s an underappreciated quiet heroism in the steadfast bureaucrat who day after day, for months on end, insists on seeking and spreading the truth. With “Silent Invasion,” Birx shows us she is a person of extraordinary tenacity who, armed with sound data and a deep sense of duty, fought corrupt forces to save lives as best she knew how.

Colleen M. Farrell is a fellow in pulmonary and critical-care medicine in New York.

The Untold Story of the Trump Administration, Covid-19, and Preventing the Next Pandemic Before It’s Too Late

Celine Dion reveals she has a rare neurological syndrome