Book review of His Name Is George Floyd: One Man’s Life and the Struggle for Racial Justice by Robert Samuels and Toluse Olorunnipa 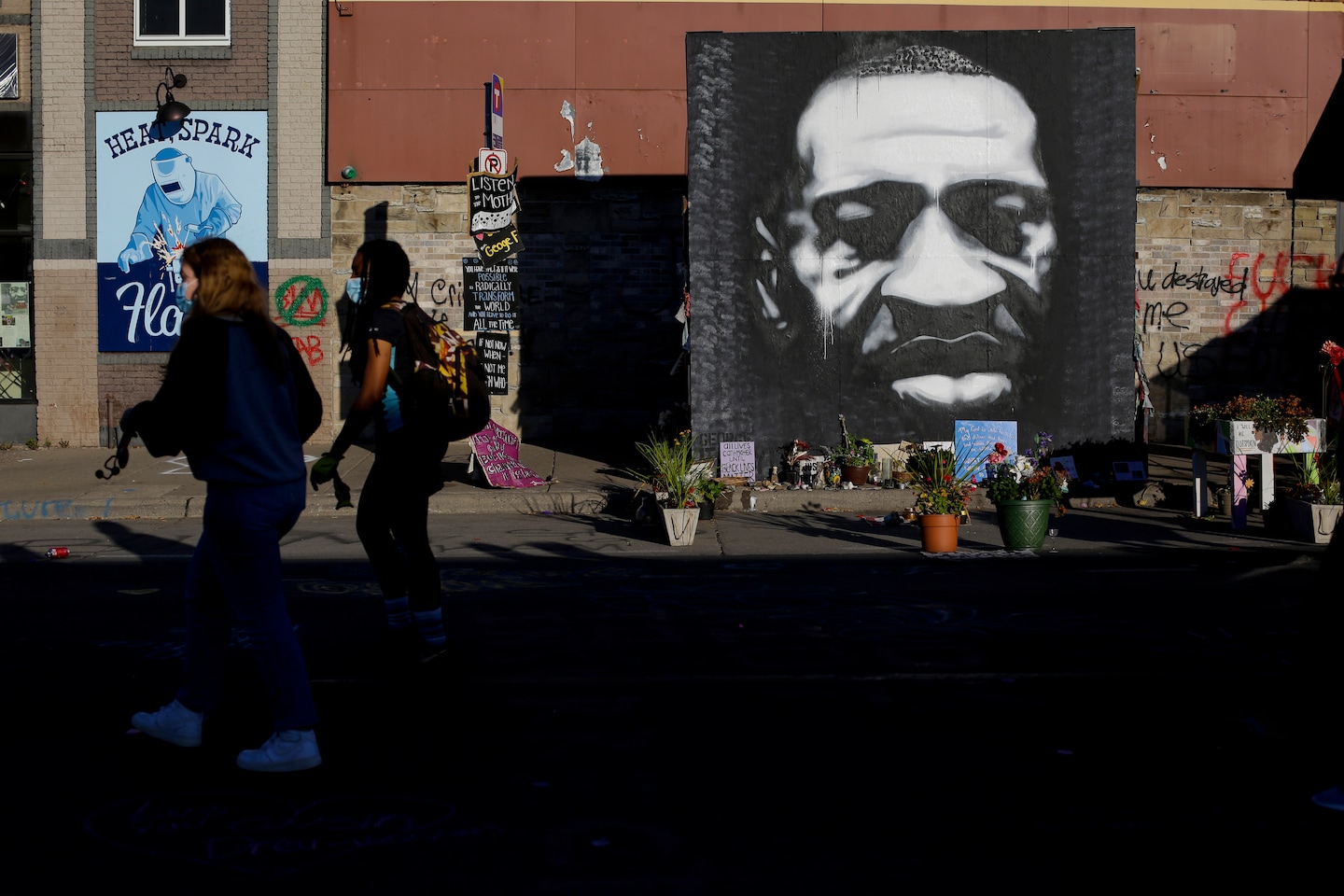 To his family and close friends, George Floyd was known as Perry — his middle name.

Although he died on a street corner in South Minneapolis, his real home was the Third Ward, a Black neighborhood of Houston. Long before police officer Derek Chauvin cut off 85 percent of the air flow to his body by putting a knee on his neck for nine minutes and 29 seconds, Floyd suffered from severe claustrophobia — so much so that he would sometimes panic when he found himself behind closed bathroom doors.

When Floyd cried “Mama!” seven times in a row toward the end, he was referring to the beloved mother he knew as “Miss Cissy,” who had passed away almost exactly two years earlier. But his nickname for his White Minnesota girlfriend, Courteney Ross, was “Moma,” so Ross thought he might have also been calling out to her and her two sons by another man when Floyd uttered his last words: “Please. Mama, I love you. Reese, I love you. Tell my kids I love them. I can’t breathe for nothing, man. This is coldblooded. I’m dead.”

In the months after cellphone video of Floyd’s horrifying death sparked protests around the world in the summer of 2020, a team of journalists from The Washington Post conducted more than 150 interviews for an award-winning, six-part series titled “George Floyd’s America,” examining, as the paper put it, “how systemic racism shaped Floyd’s life and hobbled his ambition.” Now, two of the lead reporters on that project, Robert Samuels and Toluse Olorunnipa, have produced a book-length version of the story, “His Name Is George Floyd: One Man’s Life and the Struggle for Racial Justice,” based on more than 400 interviews, that is even more detailed, vivid and moving.

Like millions of Black Americans descended from enslaved ancestors, George Floyd was born with disadvantages accumulated over generations. After the Civil War, his great-great-grandfather, Hillery Thomas Stewart, born enslaved in North Carolina, managed to make enough money as a sharecropper to acquire 500 acres of his own farmland, only to have it cheated from him by unscrupulous White creditors. A half-century later, Stewart’s granddaughter, Laura Ann, and her husband, H.B. Jones, were rental farmers on a North Carolina tobacco farm when the White owner burned down the storage barn to collect the insurance money, negating months of labor by the entire family, then forced the Joneses to repay him for the lost crops.

One of the Joneses’ 14 children, Larcenia, known as “Cissy,” tried to escape that hardscrabble existence by moving to New York City, where she met another North Carolina native and aspiring musician named George Floyd. But after giving birth to three of the four children she would have by George Sr. — including George Jr. in 1973 — Cissy despaired of her husband’s roving ways and moved as a single parent to Houston’s Third Ward, which by then was suffering from a perfect storm of ills familiar to Black urban neighborhoods across America in the decades after World War II.

The public-housing project where the Floyds found an apartment, the Cuney Homes, had become a run-down brick fortress after decades of government neglect. White flight had left once-officially-segregated Houston schools still all-Black and starved of resources well after they were supposed to be integrated under the Brown v. Board of Education ruling. A new mania for standardized testing — soon to be embraced by Texas Gov. George W. Bush — placed disproportionate pressure on poor Black students without access to tutoring, books and supplies in a state that ranked 40th in per-student spending.

Like so many young Black men from such circumstances, Floyd dreamed of transcending them through sports. Well over six feet tall in high school, he was a star basketball player and played tight end on a football team that made it to a state championship game. But his academic struggles limited his prospects as a college recruit, and by his mid-20s he was again living in the Cuney Homes and starting to deal crack cocaine, explaining sheepishly to potential buyers that he was “just a ballplayer trying to make some money.”

Perhaps for legal reasons, Samuels and Olorunnipa are uncharacteristically vague about other figures involved in leading Floyd to this fateful step, as well as in later getting him to appear in an amateur porn video. Once Floyd was arrested for dealing in 1997, he took a six-month plea deal that branded him forever as a felon. From there, he was on a path that led to an aggravated-robbery arrest and a life depressingly common for so many inner-city Black men in the era of mass incarceration: prison stints, limited job opportunities on the outside and constant paranoia about being sent back behind bars.

In the page-turner second half of the book, the authors largely put aside efforts to link Floyd to broader racial trends and statistics as they follow him to Minneapolis, where he moved in 2017 in hopes of starting over. He enrolled in a tough-love rehab program called Turning Point and got a job as a security guard at the Salvation Army and at a Latin nightclub called Conga. But he spiraled back into addiction after he started dating Ross, a single mother with her own substance abuse issues; began rooming with a new friend from rehab who relapsed and overdosed; and fell in with another ex-con from Houston who had come to Minneapolis promising to get clean but who never stopped using and dealing pills.

On Memorial Day in 2020, when Floyd walked into a grocery-and-electronics store called Cup Foods and bought a pack of menthol cigarettes with a $20 bill, the cashier suspected that the bill was counterfeit, and the manager asked for police to be called. When a team of rookie cops showed up, Floyd appeared high and confused, but he was also visibly frightened and apologetic. It’s heartbreaking to relive, moment by moment, what came next, as the handling of the suspect was taken over by Chauvin, a cocky veteran officer with a long record of civilian complaints about callous behavior and eight previous episodes of resorting to neck restraints, a tactic that Minneapolis police officers were trained to use, as the authors explain, “only if the suspect was resisting — and never with deadly pressure.”

The ups and downs of the last part of the book, which chronicles the aftermath of Floyd’s murder, also make for poignant reading. Floyd’s siblings from Houston struggled with mixed feelings of grief, vindication and guilt as they became the focus of media attention and recipients of a $27 million civil settlement from the city of Minneapolis. While civil rights lawyer Ben Crump orchestrated a public-relations campaign, a “dream team” of trial lawyers assembled by Minnesota Attorney General Keith Ellison constructed a criminal case that led to Chauvin’s conviction on three separate murder counts.

Although the whole world had seen the cellphone video of Floyd’s murder shot by teenage bystander Darnella Frazier, the prosecution team left nothing to chance. They staged secret mock trials in Des Moines and persuaded fellow officers to break the “blue wall of silence” and testify against Chauvin. They also found a compelling expert medical witness, a pulmonologist from Chicago named Martin Tobin, who used graphics and hand gestures to dramatize Floyd’s death by “asphyxia” and to pinpoint the exact “moment that life goes out of his body,” as Tobin put it on the stand.

Floyd left behind a then-6-year-old daughter, Gianna, whose mother was a former girlfriend from Houston named Roxie Danielle Washington. Throughout the book, Samuels and Olorunnipa return to Floyd’s dream of getting his act together enough to gain custody of his child. So it’s touching to hear that when President Biden met Gianna in the heady days after her father’s death, she told him proudly: “My daddy changed the world.”

Sadly, of course, that was not to be. Soon opponents of police reform shifted the terms of the debate by focusing on extreme calls to “defund the police.” Efforts to examine institutional racism and White privilege were attacked in a broad-brush backlash against critical race theory. Bipartisan support for the George Floyd Justice in Policing Act, which would have provided more funding for training and for identifying bad apples, fell apart amid squabbling over where to set the bar for prosecuting cops and how much money they could be sued for. Recalling the cries of “Black lives matter” that rang out in streets across America and the world in the months after Floyd’s death, the authors conclude that “the fascination with the phrase appeared to be a ceremonial, summertime fling.”

Instead of changing the world, the tragic life and death of George Perry Floyd serves to illustrate a harder and more complicated story of race in America. That reality was captured in advice that the veteran activist Al Sharpton gave to Floyd’s younger brother, Philonise. “I call it the Newton Law of Civil Rights,” Sharpton said. “For every action, there’s going to be a reaction. So, brace yourself. But keep going.”

Mark Whitaker is the author of “Smoketown: The Untold Story of the Other Great Black Renaissance.” Previously, he was managing editor of CNN and editor of Newsweek.

One Man’s Life and the Struggle for Racial Justice

By Robert Samuels and Toluse Olorunnipa