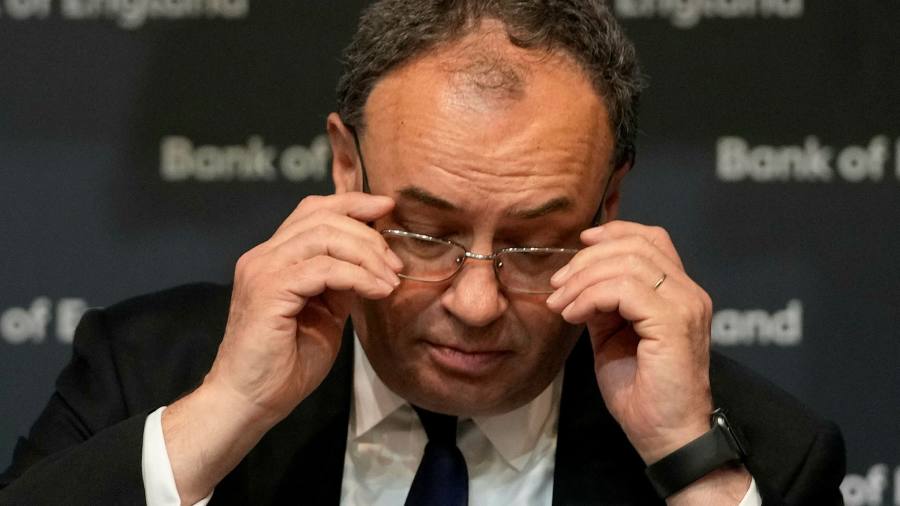 Andrew Bailey will on Monday face the toughest parliamentary grilling of a Bank of England governor since the global financial crisis, as MPs challenge him on whether the bank has lost control of inflation.

Senior Conservatives have accused the BoE of acting too slowly in raising interest rates to contain inflation, which the bank believes could exceed 10 per cent later this year.

Bailey will appear before MPs on the Commons treasury committee, the forum which held former governor Lord Mervyn King to account during the financial crisis of 2008-9, ahead of the publication on Wednesday of inflation data for April, which is expected to show another sharp increase in prices.

Last week, the FT reported growing criticism among senior Tories of the BoE’s handling of the inflation crisis, while cabinet ministers have also voiced their concern.

The Sunday Telegraph quoted one cabinet minister as saying of the BoE: “It has one job to do — to keep inflation at around 2 per cent — and it’s hard to remember the last time it achieved that target.”

In fact the BoE last hit its inflation target as recently as July 2021, but Bailey’s insistence that big price rises would be “temporary” has left him open to criticism.

“The BoE persisted beyond any rational interpretation of the data to tell us that inflation was transient, then that it would peak at 5 per cent,” Liam Fox, former cabinet minister, told MPs last week.

With the Conservative government coming under increasing pressure to help ease the cost of living crisis, the central bank — operationally independent since 1997 — is braced for a wave of political criticism over its recent record on inflation.

But Boris Johnson’s allies said the prime minister has not been critical of the BoE and there was no discussion among senior ministers over ending its independence. “That’s sacrosanct,” said one senior government figure. “Do you really think we’d want to take back responsibility for putting up interest rates?”

Kwasi Kwarteng, business secretary, told the BBC that the BoE was “a great institution” and that it had done “a good job”, arguing it was easy to criticise decisions by the monetary policy committee in hindsight. He added that Bailey was “a very capable central bank governor and he’s doing all he can on this issue.”

April’s inflation figures are set to show prices rising at their fastest pace for over 40 years. With growth grinding to a halt, the UK economy has not suffered a period of stagflation like this since the late 1970s, a period the Conservatives have long used to highlight the dangers of letting Labour run the economy.

In the April figures, the first to include the 54 per cent jump in the price cap on household energy bills, economists expect UK consumer price inflation to rise to 9.1 per cent, the highest level in the G7. The last time CPI inflation was 9 per cent or higher was in early 1982 at a time Margaret Thatcher’s Conservative government was deeply unpopular.

When Bailey gives evidence to MPs, he will appear with deputy governor Sir Dave Ramsden and two of the external monetary policy committee members who voted for a larger half a percentage point interest rate increase earlier this month: Jonathan Haskel and Michael Saunders.

Bailey has declined to comment since the MPC meeting at the start of the month, but the BoE feels that the underlying inflationary problem in the UK is less acute than in the US and price rises will slow as the economy contracts later this year.