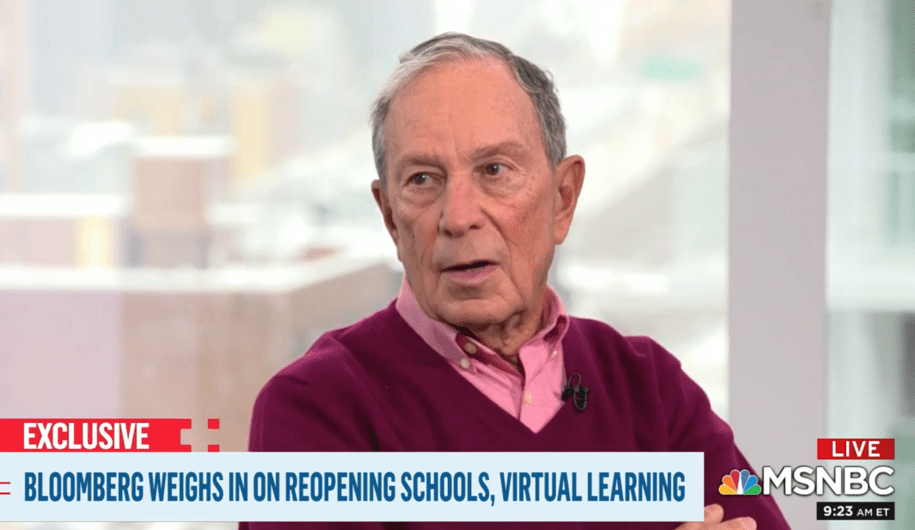 Asked about the “pushback” Biden received over his statements that he would like schools to reopen—specifically in regards to teachers unions that have asked that school systems provide a lot more safety measures than they currently are—Bloomberg said, “Think about the kids”:

MICHAEL BLOOMBERG: I think what we’re doing to poor kids is a disgrace. These poor kids are not in school. They will never recover from this. And they had a bad education experience anyways. We have not had good schools for poor kids. This now is so much worse. The president has to stand up to the unions.

BLOOMBERG: Yes, teachers unions. Teachers say, ‘Well, I don’t want to go back because it’s dangerous.’ You have a lot of city and state and federal employees who run risks. That’s part of a job. You run risks to help America, to help your state, to help your city, to help your family. And there’s just no reason not to have the schools open. The virtual classes are a joke. It is worse than a joke. Poor people don’t have iPads, they don’t have Wi-Fi, they don’t have somebody at home to sit during the day and force the child to pay attention. Without that, the virtual learning just does not exist. And teachers unions you see in Chicago and New York, we’ve had problems. It‘s time for Joe Biden to stand up and say, ‘The kids are the most important things.’ And important players here. And the teachers just are going to have to suck it up and stand up and provide an education. Otherwise, these kids have no chance whatsoever, Stephanie. It is a disaster what’s happening to them.

Bloomberg was mayor of New York City for three terms. That’s about 14 years in office during which time his wealth grew from a couple billions of dollars into tens of billions of dollars. During that time his preoccupation with turning the New York public education system into a corporation with his business school graduates getting jobs as principals of schools didn’t work. Shocker. It turns out that the only thing Michael Bloomberg did for “poor people” and school age kids was ramp up the racist Stop and Frisk policies that squashed Black Americans’ rights in the city he oversaw. So fuck you Michael Bloomberg. Fuck you very much.

Under Bloomberg, companies like Verizon were allowed to take billions of dollars in tax breaks while not outfitting the city with the level of broadband access that they promised. Let’s just say that Bloomberg wants these kids to have iPads to help facilitate their ability to learn virtually during these very difficult times. According to the NYC Department of Education, there are around 1,126,501 students in their public school system. Let us pretend no one has iPads or tablets. Without some student discount, you can purchase a new iPad Air for $599. Michael Bloomberg could theoretically purchase a brand new iPad Air for every single student in New York City and still be worth $54.2 billion dollars. And that’s if he were to purchase at retail price. Every student in New York City. There are a little more than 355,000 students in the Chicago public school system. Michael Bloomberg could throw down another $212 million and buy them new iPads and still have almost $54 billion dollars. The level of wealth that people like Mike Bloomberg have is virtually impossible to comprehend.

Maybe Mike can pay for instant tests for every student and teacher and ventilation systems to be placed in all the schools? It would be expensive for sure, but I’m sure Bloomberg would end up still being one of the five richest men in America. But that’s not how people like Bloomberg think. They believe that some people are just poor and that’s that and if Mike Bloomberg has lots of money then he’s earned that money. In fact, it’s not on the richest people in society to pay their fair share into systems like health care and the like, even if that means grandma needs to die.

There are an endless number of reasons why we all wish schools would reopen sooner rather than later. For one, teachers know best how to teach in classrooms with their students. They understand that it is important for children socially, emotionally, and psychologically. Bloomberg’s announcement of the reasons why this pandemic has been awful and continues to expose the inequalities in our society is not news.