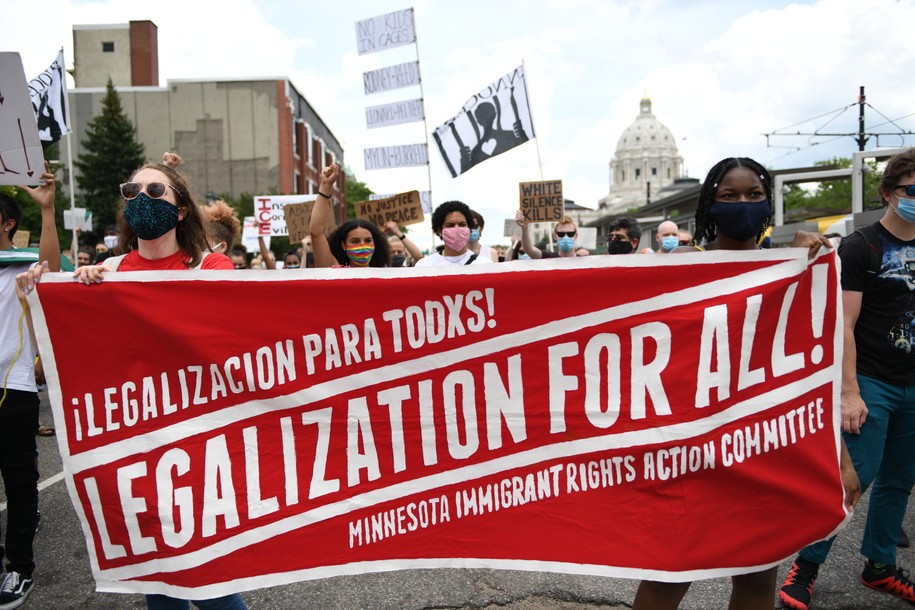 As previously noted, the U.S. Citizenship Act of 2021 would establish immediate paths to legal status for immigrants who’ve already been registered with the federal government in programs like Deferred Action for Childhood Arrivals (DACA) and Temporary Protected Status (TPS), as well as the nation’s farmworkers. They would then be eligible for to apply for citizenship after three years, CBS News said according to a  66-page summary it obtained.

”In addition to the legalization provisions, the bill would scrap Clinton-era sanctions that bar undocumented immigrants who leave the U.S. from reentering the country for three or 10 years,” the report continued. That is “huge,” tweeted immigration attorney Hassan Ahmad. “This one thing will provide relief to *millions* who can now leave the US and return on a regular visa without penalty.”

“Another centerpiece of the bill is an expansion of legal immigration,” CBS News continued. “The plan would raise the current per-country caps for family and employment-based immigrant visas and reassign unused visas. It would render spouses and children of green card holders ‘immediate family members,’ exempting them from the per-country caps.”

Included in the legislation would be a provision striking the dehumanizing term “alien” found in immigration law, and replacing it with the term “noncitizen.” Advocates cheered the initial reporting on this change. “The term ‘alien’ is used as a dehumanizing slur, and should be removed from the language in our statutes,” Texas congressman Joaquin Castro told NBC News. “This change might seem symbolic, but it’s an important step to restore humanity after years of demonization.”

Ahmad said other provisions would allow certain immigrants who were deported during the previous administration to be able to return to the U.S. McClatchy had also reported that Biden’s rollback of the previous administration’s policies would include a review of that administration’s deportation of U.S. military service members and family members. Among those who may now have a chance to return home is Alejandra Juarez, the military spouse and mom of two U.S. citizens who was cruelly deported in 2018.

While the Biden administration is fully behind the overhaul package, the Times reported that officials also said it would be supportive of passing protections through piecemeal bills. The DREAM Act and the SECURE Act, which would put DACA recipients and TPS holders on a path to citizenship, have already been introduced in the U.S. Senate. Whether it’s one package or piecemeal, what matters is that the job just get fucking done now.

“You’re talking about a fight that we’ve had for over three decades at this point,” Community Change Action President Lorella Praeli told the Times. “I’m not interested in a dance. I’m committed to seeing this through and delivering on concrete changes.” With Vice President Kamala Harris as the tie-breaking vote in the Senate, “they also called on the president to promise that he would also use a budgetary tool known as reconciliation to enact smaller components of the legislation even as he pushes ahead with the larger effort,” the report continued.

Of course, there’re already reports about Democrats fretting over Republican backlash, because of course. “‘Recipe for disaster’: Dem fears mount over immigration overhaul,” read one Politico headline. That just ignores that anti-immigrant vitriol already is the Republican brand and message, because that’s all they have. It also ignores that the most anti-immigrant president in modern U.S. history just lost his election, by a lot.

Just as notably, it ignores that American voters from all major political parties favor a path to citizenship for undocumented immigrants by wide majorities.

“Americans are much more pro-immigrant than ever before,” America’s Voice said last month. “When asked, ‘Which statement comes closest to your view about how the immigration system should deal with immigrants who are currently living in the U.S. illegally?’ A combined 80 percent support some sort of permanent solution—either citizenship or permanent status—for undocumented immigrants, with a strong majority of 64% supporting citizenship, 16% supporting permanent legal status short of citizenship, and 19% supporting deportation.”

A path to citizenship is the mainstream position. That’s just a fact, no matter how its opponents try to spin it. The anti-immigrant hate groups are going to do what they’re going to do. Their anti-immigrant allies in Congress, like Sen. Tom Cotton, will do the same. So let’s do what we need to do to protect immigrant families. “Now is the time for Democrats to use every tool at their disposal to provide protection for the immigrant community without relying on the party of Trump,” RAICES’ Chief of Advocacy Erika Andiola said in a tweet.