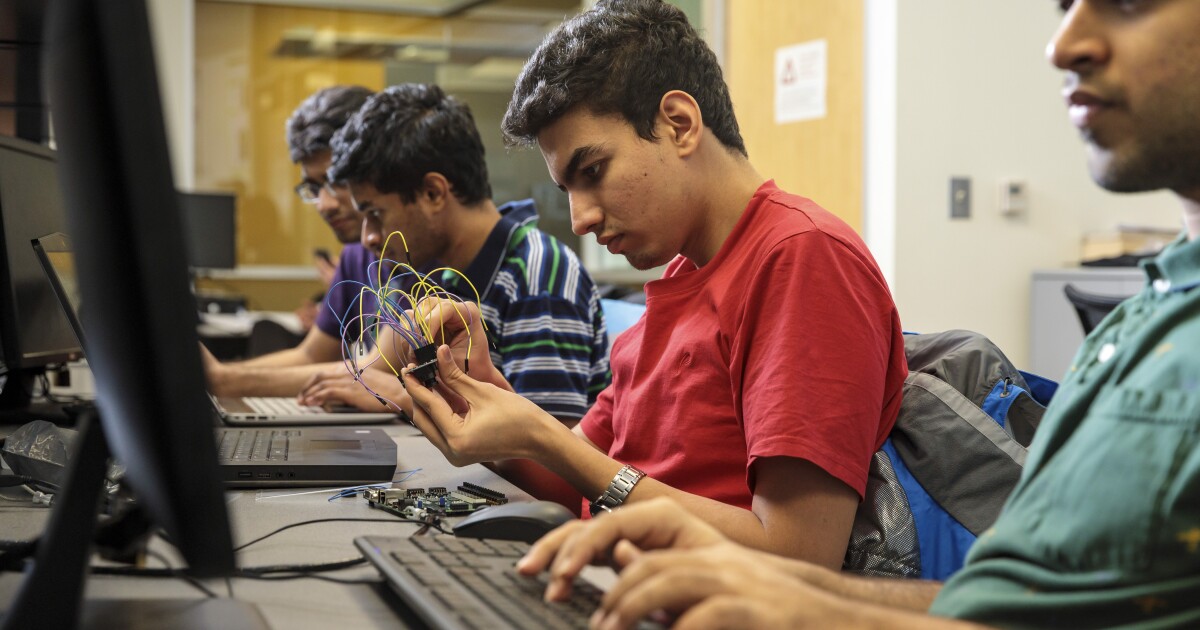 On his very first day in office, President Biden proposed immigration reform that, among other provisions, would make it easier for international students who earn graduate degrees in science and engineering fields to stay in the United States after graduation.

The legislation was hailed by higher-ed groups, which have long called for stapling a green card to every Ph.D. A key reason: Measures that permit international graduates to stay and work could go a long way toward helping American colleges recruit them in the first place, particularly as institutions face increasing global competition from countries like Canada and Australia that offer an easy pathway from study to work.

Keeping the talent pipeline flowing is especially critical in STEM fields, where more than half of all doctoral degrees are earned by student-visa holders.

“It’s both an investment in our institutions because we want to have strong recruitment and an investment in our students,” said Miriam Feldblum, executive director of the Presidents’ Alliance on Higher Education and Immigration, a nonpartisan group of college leaders. “Their success is our success.”

The White House has not released the text of the legislation, which has not yet been introduced in the U.S. Congress. But during the presidential campaign, Biden specified that he would favor increasing the number of visas awarded to skilled workers and would exempt recent graduates of doctoral programs in STEM fields from a cap on green cards.

The measure would also make Dreamers, young immigrants brought to America illegally as children, eligible to apply immediately for permanent residency and for citizenship in three years.

Separately, the president has signed executive orders protecting Dreamers from deportation and rolling back a ban on travelers, including students and scholars, from a half-dozen predominantly Muslim countries.

Whether a broad legislative fix can win approval in a closely divided Congress is far from clear — past efforts at more-comprehensive reform, during the Barack Obama and George W. Bush presidencies, failed. Officials with the Biden administration have already signaled a willingness to take up the components of the bill in piecemeal fashion, however, and efforts to retain larger numbers of international graduates have bipartisan backing.

In a 2018 Pew Research survey, eight in 10 Americans said they support more immigration of high-skilled people. The following year, former President Trump proposed shifting from a family-based immigration system to one that emphasizes skills-based migration.

Those countries, which are also major destinations for international students, promote the priority that international graduates are given in obtaining work visas and, ultimately, permanent residency in their overseas student recruitment. While many factors influence where students choose to study, both Canada and Australia were gaining ground in foreign-student enrollment prior to the pandemic. Meanwhile, the number of international students in the United States fell slightly, by about 2 percent, in the 2019 academic year.

International students do prize the ability to gain work experience in the United States, in addition to their degree. Last year, more than 223,500 students — about one in five student-visa holders — took part in Optional Practical Training, a program that allows graduates to stay and work for up to three years. Participation in OPT has increased almost 200 percent over the past decade.

Many of those students prefer to return home, but for those who want to stay, the options are frequently few. Congress hasn’t increased the cap on the number of H1-B skilled-worker visas granted annually, 85,000, since 2005. (As employers, American universities are exempt from the cap.) From there, the path to permanent residency further narrows, and the quotas on how many green cards can be granted to applicants from particular countries are regularly exceeded by the number of applicants from China and India, the two largest sources of international students in the United States.

Kal Lele, a doctoral student in electrical engineering at Ohio University, is among the students who could benefit from the legislation. Few companies back home in India do the kind of advanced work in antennae that is the focus of his research, yet many American jobs in his field, because of their sensitive nature, are limited to citizens and permanent residents. The Biden plan made him feel “excited and hopeful,” Lele said, although he acknowledged the hurdles to the measure becoming law.

“I want to get a job, pay taxes, and contribute to technology and the economy,” he said.

Educators worry that the cracks in the talent pipeline could be depressing international interest, although other causes — including restrictive visa policies in the Trump era and better educational options in students’ home countries — also shape recent enrollment trends. A sustained decline in international students could be bad news for American colleges, whose bottom lines have increasingly come to rely on their tuition and fees.

At the doctoral level, students typically receive stipends and other support from universities, but rolling out the welcome mat would send a message to international undergraduates as well. And doctoral students contribute in other ways: Fifty-seven percent of the Ph.D.s in engineering awarded in 2018 went to student-visa holders, up from 43 percent in 1999, according to the National Science Foundation. In mathematics and computer science, the share rose to 55 percent from 41 percent over the same time period.

Eight in 10 of those science and engineering graduates stay in the United States for their first job or postdoctoral position, the NSF reports.

Critics argue that international graduates take jobs from Americans, but there is little evidence that programs like OPT have adverse affects on earnings or unemployment of local workers, in part because their positions are often highly specialized.

Newly published research found no significant difference in compensation between early-career American and foreign-born doctorates. Biden’s plan to award green cards to STEM Ph.D.s meets a real need, said Michael Roach, an assistant professor of entrepreneurship at Cornell University and one of the study’s authors, because right now such graduates have to go through an “inefficient pathway” to permanent residency, relying on H1-Bs to stay in the United States and work.

Roach also noted that a growing number of high-tech firms have opened research and development centers in Canada because they can’t hire enough skilled workers in the United States.

Lori S. White, president of DePauw University, said it’s mistaken to frame the debate as an either-or choice between international and American graduates. The United States can make it easier for international students to stay in the United States while encouraging more Americans, especially those from underserved communities, to pursue STEM degrees, she said.

The Indiana liberal-arts college enrolled its first international student more than 140 years ago, and between 15 and 18 percent of its student body is from overseas. They add to the diversity of the campus experience, White said. “If you think about the investment we make in international students, why would we not want them to apply their talents here?”