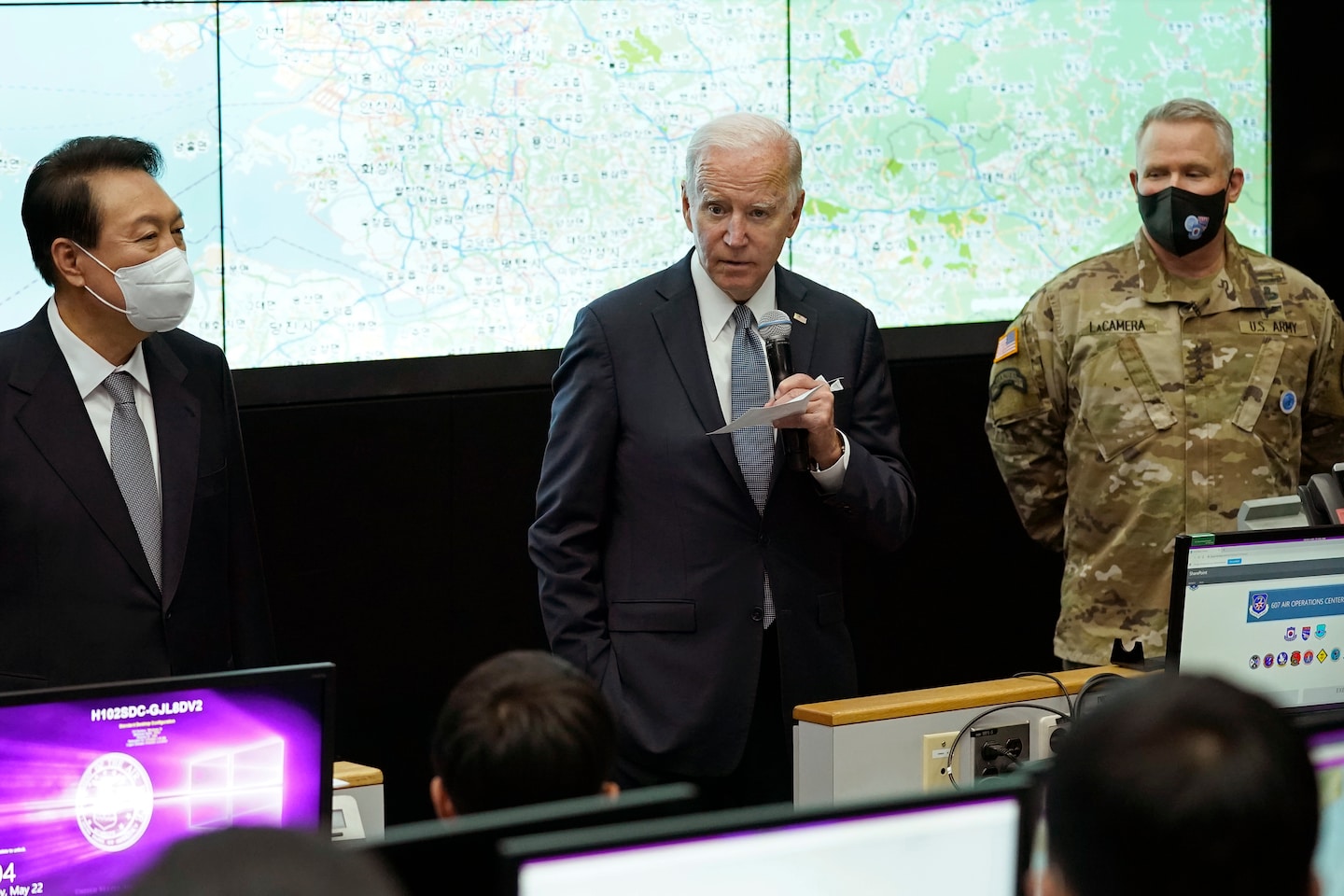 SEOUL — President Biden was about to take off from Seoul to Tokyo during his first Asia trip as president, when a reporter asked if he had a message for North Korean leader Kim Jong Un. Biden’s succinct reply? “Hello. Period.”

His two-word answer stood in stark contrast with former president Donald Trump’s active pursuit of engagement with the North Korean leader. While Trump met with Kim three times and boasted friendly ties through “love letters,” Biden has taken a decidedly different approach, saying he would not meet with Kim unless he is “sincere” and “serious.”

North Korea has been barreling forward with its weapons program, with another missile test likely on the way. The reclusive country has retreated ever inward during the pandemic, and is now confronting its first covid-related public health crisis. Yet the prospect for re-engaging North Korea remains further out of reach than ever.

During his Asia trip, Biden sought to strengthen relationships with allies in the region. On North Korea, that means the United States and South Korea — which has a new conservative leader who is skeptical of its northern neighbor — hope to work more closely to show they are prepared to deal with Kim’s missile threats. They are leaving the door open to dialogue with North Korea, but in no rush to force a breakthrough.

For many North Korea watchers, the Biden administration’s approach is reminiscent of the Obama era’s “strategic patience,” which consisted of waiting for North Korea to change and avoiding actions that would intentionally escalate tensions.

“The Biden administration’s inaction towards North Korea increasingly looks like the so-called ‘Strategic patience 2.0’ or even a strategic negligence,” said Park Won-gon, professor of North Korean Studies at Ewha Womans University in Seoul. “It has been clear that President Biden has little confidence in Kim Jong Un.”

During Biden’s first summit with newly-elected South Korean President Yoon Suk-yeol, the two countries agreed to consider expanding the joint military exercises in response to the threat from North Korea — an activity which has long angered the reclusive nation. Trump had pledged to cancel the allied military exercises, calling them “war games” that are “provocative” and “expensive.”

“The President’s message to Kim while in Seoul — a simple ‘hello’ — left no room for misinterpretation. Brevity is the soul of wit, and in Biden’s case, one simple word conveyed his sentiments toward the DPRK leader and his behavior,” said Soo Kim, North Korea expert at RAND Corporation in Washington, using the acronym for North Korea’s official name.

“It’s possible that the administration has opted for this position similar to ‘strategic ambiguity’ to convey to Kim that the U.S. will not be shaken up by his provocations,” she said. “The ambiguity in discerning what the U.S. is thinking or considering as options for dealing with North Korea might be unnerving for Kim.”

The range of messages Biden sent during his trip, from offering coronavirus aid to expanding allied military drills, demonstrated the balance in the president’s approach, according to the administration. Biden sought to show how United States will work with its allies to provide deterrence on North Korea, and “to make very clear that we’ll respond decisively to any threats and any aggression,” said Ned Price, State Department spokesman, on Friday.

But North Korea has not responded to any offers of aid, whether directly by Seoul or indirectly by Washington. It also has not yet reacted to Biden’s vows to step up nuclear deterrence, and has not yet conducted the long-range ballistic missile test that Washington and Seoul predicted could take place around the time of Biden’s trip to Seoul.

Instead, North Korea claimed this week that it was resolving its outbreak of “fever” patients on its own, citing decreasing numbers of suspected covid cases.

Meanwhile, North Korea continues to build its nuclear-capable weapons arsenal, and emphasizing its policy of “self-reliance.” Its borders have remained shut for more than two years, despite the economic and humanitarian turmoil that is brewing inside the country because of it. It is unclear when Kim would engage again with the outside world — or what it would take to get him there.

What’s happening inside North Korea? Since the pandemic, the window has slammed shut.

Despite unfavorable situations including the coronavirus crisis in the country, Kim is unlikely to change courses on his military pursuits, said Ryu Hyun-woo, North Korea’s former acting ambassador to Kuwait who defected to South Korea in 2019. Ryu said Kim will not accept offers of aid from South Korea and the United States, when his bigger priority lies in moving ahead in the arms race and strengthening the country’s nuclear arsenals.

“Kim Jong Un sees nuclear and missile development as a way to boost internal unity,” Ryu said. “It means he will not turn away from, but hold onto nuclear pursuits in face of difficult challenges.”