Biden vows to defend Taiwan militarily if invaded by China 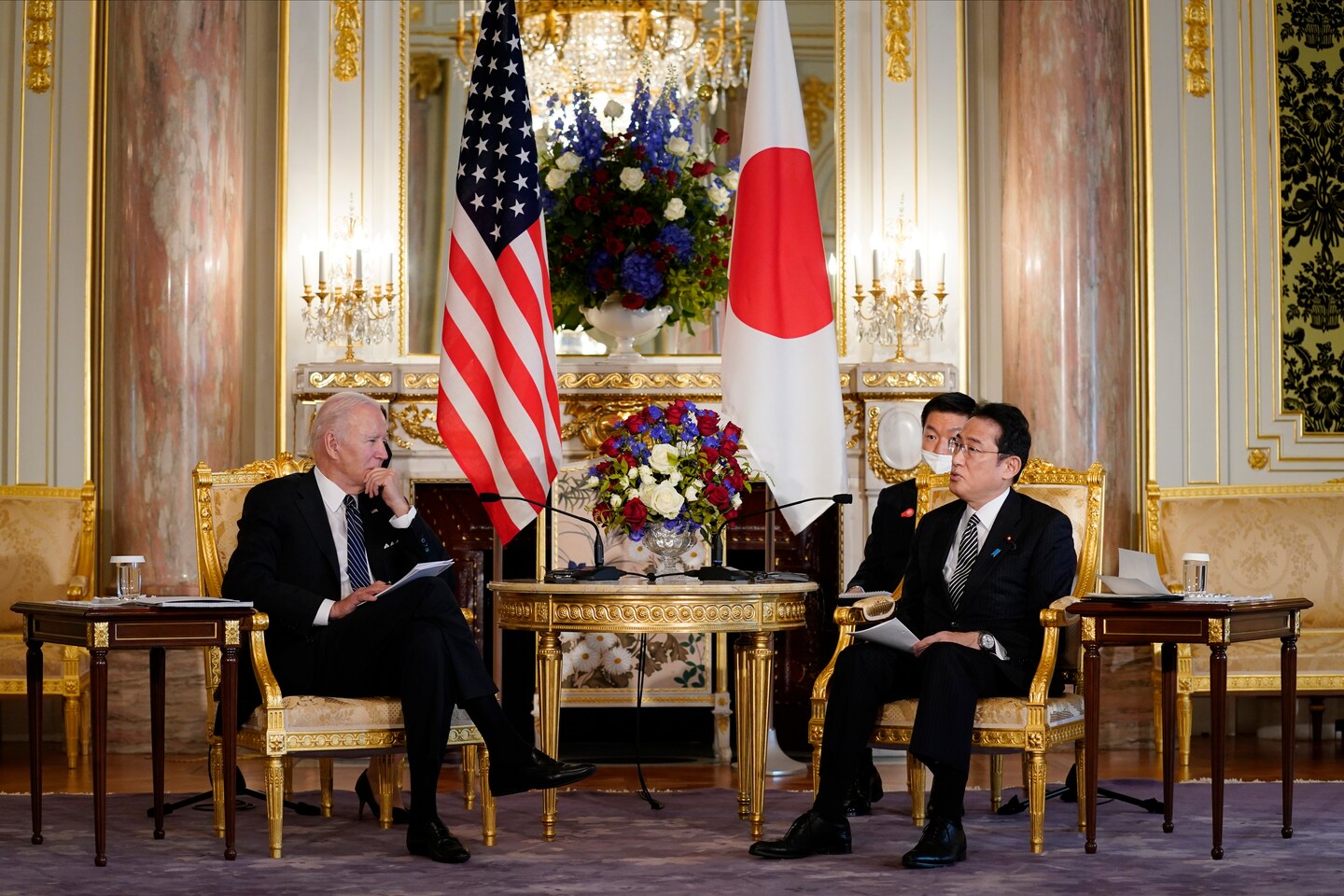 TOKYO — President Biden opened the second chapter of his Asia tour Monday with several moves — some choreographed, others apparently not — signaling a more confrontational approach to China in matters of both the economy and national security as his administration looks to curb the influence of the world’s most populous nation.

In a news conference Monday, Biden said the United States would defend Taiwan militarily if it came under attack by China, despite the U.S. policy of “strategic ambiguity.” Later, his administration announced the outlines of a new trade agreement that is meant to strengthen U.S. economic ties with other nations in the Indo-Pacific.

Later this week, Biden will participate in a meeting of the Quad, the partnership made up of the United States, India, Japan and Australia that is in part meant to counter China’s power globally.

On Taiwan, a White House official walked back Biden’s remarks almost immediately, saying Biden simply had reemphasized a pledge made through a 1979 law that calls on the United States to provide Taiwan with the military means for self-defense. The United States retains a policy of strategic ambiguity toward the island, meaning it is deliberately unclear on what it would do when it comes to the issue of defending Taiwan.

But taken together, it underscored the Biden administration’s aggressive strategy to blunt the rising influence of China — as the president drew parallels to a potential conflict escalating between China and Taiwan to the existing conflict spurred by Russia’s invasion of Ukraine.

“Russia has to pay a long term price for that in terms of the sanctions that have been imposed,” Biden said during a news conference with Japanese Prime Minister Kishida Fumio at Akasaka Palace. “If in fact there’s a rapprochement met between … the Ukrainians and Russia, and these sanctions are not continued to be sustained in many ways, then what signal does that send to China about the cost of attempting — attempting — to take Taiwan by force?”

Though the president said he did not expect such an invasion, Biden said China was “already flirting with danger” and said despite the United States’ “one China” policy, “that does not mean that China has the … jurisdiction to go in and use force to take over Taiwan.”

“The idea that it can be taken by force, just taken by force is just not — it’s just not appropriate,” Biden said. “It would dislocate the entire region and be another action similar to what happened in Ukraine.”

At Monday’s summit, both Biden and Kishida reinforced their commitment to the alliance and their cooperation on responding to the Russian war. Kishida, elected prime minister last fall, has received high marks at home for his decisions — 71.2 percent of the public supports his response to the Russian invasion of Ukraine, according to a survey released Sunday by Kyodo News, a Japanese news outlet.

The two countries also agreed to work closely together to respond to China’s rise.

Part of that strategy included the launch of the so-called Indo-Pacific Economic Framework, the contours of a new trade framework that is designed to be an economic bulwark against China. The administration says it improves on the political and substantive shortcomings of the Trans-Pacific Partnership, negotiated during the Obama administration when Biden was vice president.

The dozen countries in the new pact with the United States include Australia, Brunei, India, Indonesia, Japan, Republic of Korea, Malaysia, New Zealand, the Philippines, Singapore, Thailand and Vietnam. Those 13 countries produce 40 percent of global gross domestic product, according to administration officials.

“It is by any account the most significant international economic engagement that the United States has ever had in this region,” Commerce Secretary Gina Raimondo said.

Administration officials have also pointed to economic data showing the U.S. economy had grown faster than that of China for the first time in four decades as proof that partnering with the United States would be a more alluring option for other Indo-Pacific nations.

“Our view is that this is not about a zero-sum game with China,” national security adviser Jake Sullivan said. “It’s not about forcing countries to choose. But it is about offering a value proposition that we think countries are taking extremely seriously.”

But many officials throughout Asia, including Japan, are wary of the U.S. rollout of its new economic proposal. Japanese officials have said they are relieved to see the United States show its willingness to return to the Indo-Pacific region economically, but remain frustrated about the U.S. pullout in 2017 from the Trans-Pacific Partnership under former president Donald Trump.

Although it was Trump that formally withdrew the United States from that agreement, it also lacked support from both parties on Capitol Hill and would not have been ratified. It’s unclear whether Congress would have to ratify this new trade framework.

Standing next to Biden during the news conference at Akasaka Palace, Kishida on Monday repeatedly stressed Japan’s wish for the United States to rejoin the TPP.

Meanwhile, many Asia-Pacific countries are already participating in a free-trade agreement involving China, called the Regional Comprehensive Economic Partnership. The framework released by the White House and the dozen countries Monday does not include specific commitments or requirements of what each nation has to do to reap the benefits of the trade framework.

The administration has also faced questions why Taiwan was excluded from the initial list of participating countries. Last week, a bipartisan majority of 52 senators wrote to Biden, pressing him to ensure the self-governing island and U.S. trading partner was a part of the new framework and said doing so was an economic and military imperative.

Excluding Taiwan “would significantly distort the regional and global economic architecture, run counter to U.S. economic interests, and allow the Chinese government to claim that the international community does not in fact support meaningful engagement with Taiwan,” stated the letter, which was written by the two leaders of the Senate Foreign Relations Committee.

The United States needs to bring countries from Southeast Asia, or Association of Southeast Asian Nations (ASEAN), and provide more specifics about its vision to convince countries fully on board, said Fukunari Kimura, economics professor at Keio University in Tokyo and chief economist of the Economic Research Institute for ASEAN and East Asia.

Market access — lowering the barrier for trade activity with the United States — was an important incentive to convince Southeast Asian countries to join TPP.

“Together with like-minded countries, the U.S. must clearly specify the items that the IPEF would cover,” Kimura said. “To make the IPEF fly, it must secure the involvement of ASEAN. Otherwise, it would be a minor extension of a security gathering with a limited number of countries in the region. … The IPEF must provide a good alternative incentive for them if market access cannot be included. The ASEAN economy is still growing with international production networks.”

Sen. Bill Hagerty (R-Tenn.), the U.S. ambassador to Japan under the Trump administration, also pointed to the lack of provisions in the new trade framework to boost market access, even as allies in the region are “eager to see more U.S. economic leadership.”

Julia Mio Inuma in Tokyo and Michael E. Miller in Sydney contributed to this report.

7 Sequin-Skirt Outfits for Your Next Party Look

Domino’s tried to sell pizza to Italians. It failed