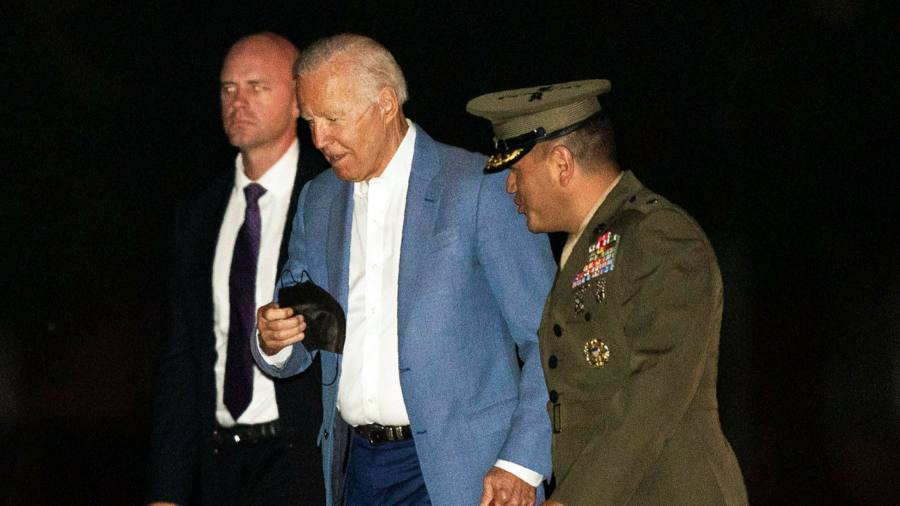 Sign up to myFT Daily Digest to be the first to know about US foreign policy news.

Joe Biden, the US president, will on Friday deliver an address to the nation on the botched evacuation in Afghanistan as a briefing war erupted in his administration over who was to blame for the chaos in Kabul.

Tens of thousands of US citizens and eligible Afghans are struggling to reach the airport in the centre of the capital, which is now under Taliban control, prompting mounting public criticism from within the president’s own party.

The White House, US intelligence officials, diplomats and the Pentagon are pointing fingers at each other, both in public and via a series of damaging leaks, signalling the crisis was caused by poor planning, weak decision-making and inaccurate assessments about the prospects of a lightning-quick Taliban takeover.

As of Thursday, the US had evacuated only 7,000 people since the Taliban took over the presidential palace on Sunday. The US has not said how many it will evacuate, but about 11,000 US citizens have preregistered their presence in Afghanistan, while tens of thousands of Afghans who helped the US mission are also eligible for evacuation.

US defence officials say they have capacity to fly out 5,000-9,000 people a day from Kabul international airport, but have managed only 2,000 a day. US officials attribute this to slow processing of names by the state department as well as Taliban checkpoints throughout the city that are preventing evacuees from getting to the airport.

Biden, who is scheduled to deliver an address from the White House at 1pm Eastern Time, had committed to leave entirely by August 31, but has hinted he could extend the timeline.

Bill Roggio, a military analyst who is in touch with US citizens unable to reach the airport, said the US evacuation operation was “disgraceful.”

“Six days after the fall of Kabul and there are still Americans trapped behind Taliban lines and every moment matters at this point,” he told the Financial Times. “The Taliban is effectively holding an unknown number of Americans hostage through the situation it’s created outside the airport, by not allowing safe passage to the airport.”

US military operations are based at the city airport. US secretary of defence Lloyd Austin said earlier this week the US had no capacity to pluck large numbers of people from beyond the airport.

Jake Sullivan, national security adviser, said the Taliban had informed the US they were prepared to provide the safe passage of civilians to the airport, but was unclear about the “exact timetable”.

He has warned separately of the growing risk of jihadi attacks from an Isis affiliate based in the east of Afghanistan that counts both the US and Taliban as an enemy.

Sullivan has said the administration had received reports of people being turned away from the airport by the Taliban or even beaten. “We are taking that up in a channel with the Taliban to try to resolve those issues. And we are concerned about whether that will continue to unfold in the coming days,” he said earlier this week.

Nato foreign ministers on Friday issued a statement calling “on those in positions of authority in Afghanistan to respect and facilitate . . . safe and orderly departure, including through Hamid Karzai International Airport in Kabul”.

The crisis comes as Biden defends himself from criticism of incompetence amid the US drawdown he ordered. Biden told ABC News this week he did not know how the US could “have gotten out without chaos ensuing”.

But US officials have said the Biden administration had not prepared for an evacuation of citizens with Kabul under Taliban control and many are frustrated over the lack of contingency planning.

On Thursday, it emerged nearly two dozen state department officials had sent a classified cable direct to US secretary of state Antony Blinken in July, which warned the Taliban’s advance was much more imminent than other assessments concluded. It was sent through the department’s confidential “Dissent Channel”, indicating it was a view held by a minority.

A person familiar with the contents of the memo, whose existence was first reported by the Wall Street Journal, said the cable was “immediately brought to the secretary’s attention, and he personally approved the response”.

“We appreciated the thoughts of the drafters, which reflected much of the thinking at the department and throughout the inter-agency,” the person added.

The leak came after Biden told ABC News there had been no consensus in intelligence reporting, which he said indicated the Taliban would most likely take over by the end of the year. He added his top military advisers had been “split” over the timeline to pull out troops and said he didn’t think anybody had anticipated Afghan national forces would “just collapse”.

Intelligence officials have defended their assessments, suggesting the timeline for Taliban takeover depended on the cohesion of the Afghan national response. But some insiders have said assessments were insufficiently pessimistic and depended on groupthink.

France and the UK should be ashamed of their immature squabbles

Dota 2’s next hero is Marci, coming ahead of Dragon’s Blood: Book Two in January