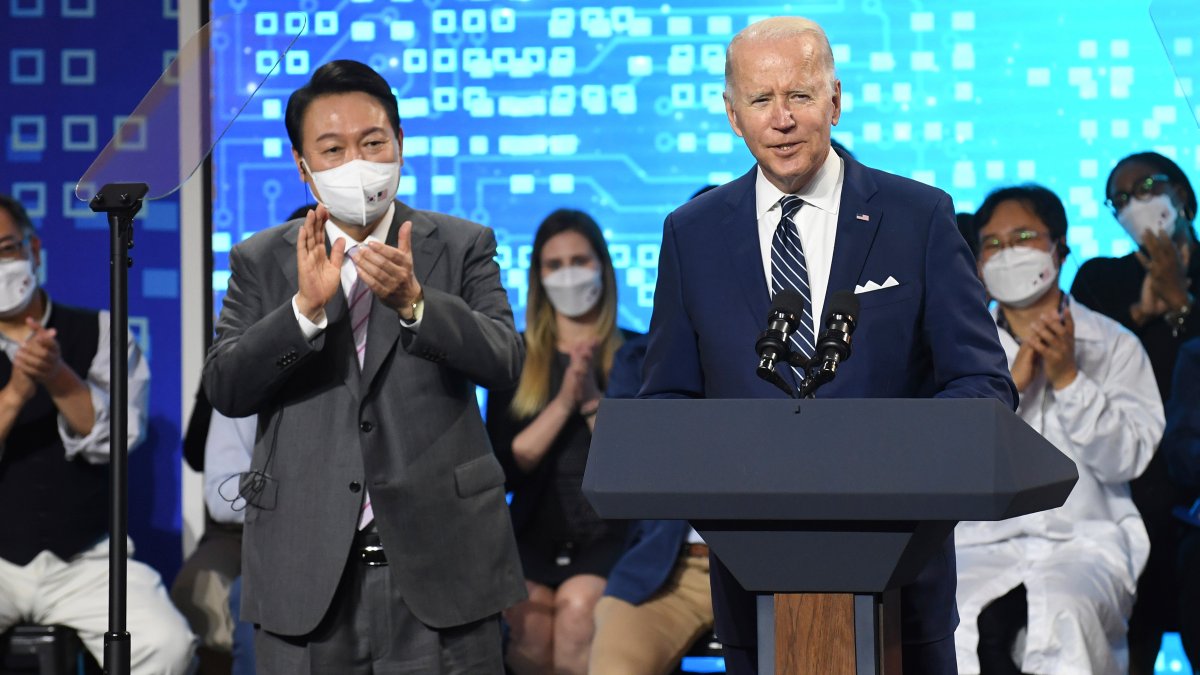 U.S. President Joe Biden and South Korean President Yoon Suk Yeol said after meeting Saturday that they will consider expanded joint military exercises to deter the nuclear threat from North Korea at a time when there’s little hope of real diplomacy on the matter.

The announcement reflects a shift in direction by both leaders from their predecessors: Former U.S. President Donald Trump had considered scrapping the exercises and expressed affection for North Korean leader Kim Jong Un. And the last South Korean president, Moon Jae-in, remained committed to dialogue with Kim to the end of his term despite being repeatedly rebuffed by the North.

Biden said cooperation between the U.S. and South Korea shows “our readiness to take on all threats together.”

North Korea, which has defended its nuclear weapons and missile development as a necessary deterrence against what it describes as U.S. threats, could well respond angrily to Saturday’s announcement. It has long described joint military exercises as rehearsals for an invasion, although the allies have portrayed the drills as defensive.

Biden and Yoon affirmed in remarks at a news conference that their shared goal is the complete denuclearization of North Korea. The U.S. and South Korea said in a joint statement that they were committed to a “rules-based international order” following Russia’s invasion of Ukraine. The statement likely sets the stage for how the U.S. and its allies will address any challenges with North Korea.

Yet Biden also reiterated his offer of vaccines to North Korea as the coronavirus spreads at a dangerously fast speed through that country. Asked if he would be willing to meet with Kim Jong Un, Biden said that would depend on whether the North Korean leader was “sincere” and “serious.”

“Yes, we’ve offered vaccines, not only to North Korea but China as well,” Biden said. “We’re prepared to do that immediately. We’ve gotten no response.”

The division of the Korean peninsula after World War II has led to two radically different countries. In South Korea, Biden is touring factories for computer chips and next-generation autos in a democracy and engaging in talks for greater cooperation. But in the North, there is a deadly coronavirus outbreak in a largely unvaccinated autocracy that can best command the world’s attention by flexing its nuclear capabilities.

Speaking to reporters aboard Air Force One as Biden flew to South Korea, White House national security adviser Jake Sullivan said the U.S. has coordinated with Seoul and Tokyo on how they’ll respond should the North conduct a nuclear test or missile strike while Biden is in the region or soon after. Sullivan also spoke with his Chinese counterpart Yang Jiechi earlier in the week and urged Beijing to use its influence to persuade the North to cease the tests.

As part of a five-day visit in Asia, Biden spent Saturday developing his relationship with Yoon, who assumed office little more than a week ago.

The U.S. president on Saturday laid a wreath at Seoul National Cemetery, wearing white gloves and a somber expression as he also burned incense and then signed a guest book. Biden then greeted Yoon at the People’s House for a nearly two-hour meeting followed by the joint news conference. The leaders will also attend a dinner at the National Museum of Korea.

In addition to discussing North Korea, both leaders emphasized economic security and growing trade relations as two Korean industrial stalwarts — Samsung and Hyundai — are opening major plants in the U.S.

Biden faces growing disapproval within the U.S. over inflation near a 40-year high, but his administration sees one clear economic win in the contest with China for influence in the Pacific. Bloomberg Economics Analysis estimates that the U.S. economy will grow faster this year than China for the first time since 1976, a forecast that Biden highlighted at the news conference.

The U.S. has struggled to knit together a coalition of countries in Asia that can counterbalance China’s growing strength, abandoning the trade deal known as the Trans-Pacific Partnership after a political backlash at home.

Biden sidestepped a question about resurrecting the agreement, but he spoke about the potential for closer ties in the region beyond traditional allies like South Korea and Japan.

“Things have changed,” he said. “There is a sense among the democracies in the Pacific that there’s a need to cooperate much more closely. Not just militarily, but in terms of economically and politically.”

At the start of the administration, many White House officials thought Kim’s nuclear ambitions would prove to be perhaps the administration’s most vexing challenge and that the North Korean leader would aim to test Biden’s mettle early in his time in office.

Through the first 14 months of Biden’s administration, Pyongyang held off on missile tests even as it ignored efforts by the administration to reach out through back channels in hopes of restarting talks that could lead to the North’s denuclearization in return for sanctions relief.

But the quiet didn’t last. North Korea has tested missiles 16 separate times this year, including in March, when its first flight of an intercontinental ballistic missile since 2017 demonstrated a potential range including the entire U.S. mainland.

The Biden administration is calling on China to restrain North Korea from engaging in any missile or nuclear tests. Speaking on Air Force One, Sullivan said Biden and Chinese President Xi Jinping could hold a phone call in the coming weeks.

Biden has fiercely criticized Beijing over its human rights record, trade practices, military harassment of the self-ruled island of Taiwan and more. And while Biden has made clear that he sees China as the United States’ greatest economic and national security competitor, he says it is crucial to keep the lines of communication open so the two powers can cooperate on issues of mutual concern. North Korea is perhaps highest on that list.

White House officials said Biden won’t visit the Demilitarized Zone dividing the Korean Peninsula during the trip — a standard stop for presidents during Seoul visits dating back to Ronald Reagan. Biden visited the DMZ in 2013 as vice president. Sullivan said the president’s decision to skip the stop this time wasn’t driven by security concerns.

Instead, Biden on Sunday will visit the Air Operations Center’s Combat Operations Floor on Osan Air Base, south of Seoul. The U.S. sees it as one of the most critical installations in Northeast Asia.