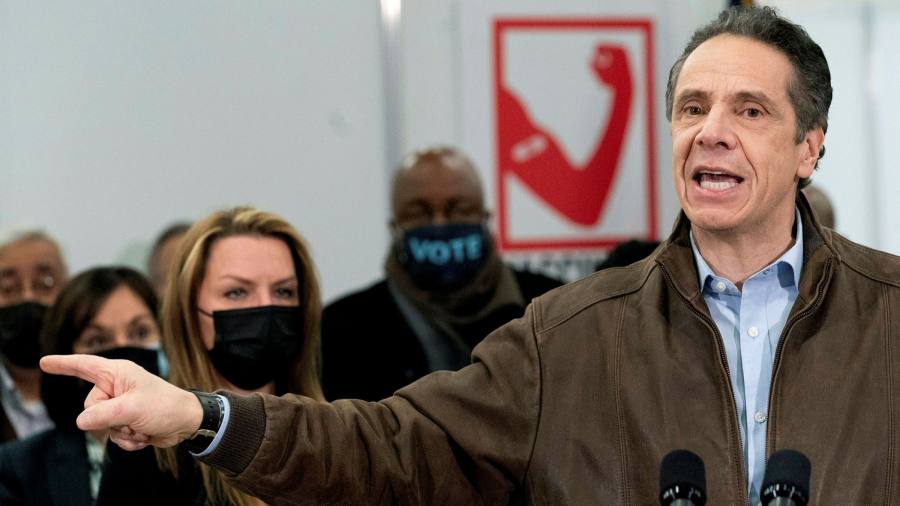 Biden’s position, articulated in a television interview with ABC News, was the first time the Democratic president has waded into the crisis engulfing Cuomo, a friend and political ally.

The New York governor was, until recently, seen as a political star for his resolute leadership in the early days of the coronavirus pandemic. But his hold on power has become tenuous after seven women came forward in recent weeks to accuse him of inappropriate behaviour and sexual harassment.

Cuomo has also been besieged by criticism of his management of the state’s nursing homes during the pandemic. The New York attorney-general found in January that the administration had undercounted Covid-19 deaths among nursing home residents by as much as 50 per cent — perhaps to blunt criticism from political rivals.

New York’s two US senators — Chuck Schumer and Kirsten Gillibrand — last week joined mounting calls for Cuomo to step down “for the good of the state”.

Asked on Tuesday if Cuomo should resign if an investigation confirmed the accounts of his accusers, Biden replied: “Yes. I think he’ll probably end up being prosecuted, too.”

Biden, whose judgment is regarded by political analysts as vital to Cuomo’s future, has previously sought to skirt the scandal. The president is one of the few figures capable of shifting the governor’s stance, according to people close to Cuomo.

The governor has apologised for causing pain but has denied inappropriately touching anyone. He has also insisted that he will not resign, urging citizens to await the results of an investigation before reaching their own conclusions. It is not clear how long the investigation will take.

Although elected Democratic officials have turned against him, recent polls suggested that the three-term governor has maintained support among many of the state’s voters.

In the TV interview, Biden said the women who came forward in making the allegations against Cuomo should be assumed to be telling the truth. “[It] takes a lot of courage to come forward,” the president said. “So, the presumption is they should be taken seriously. And it should be investigated. And that’s what’s under way now.”