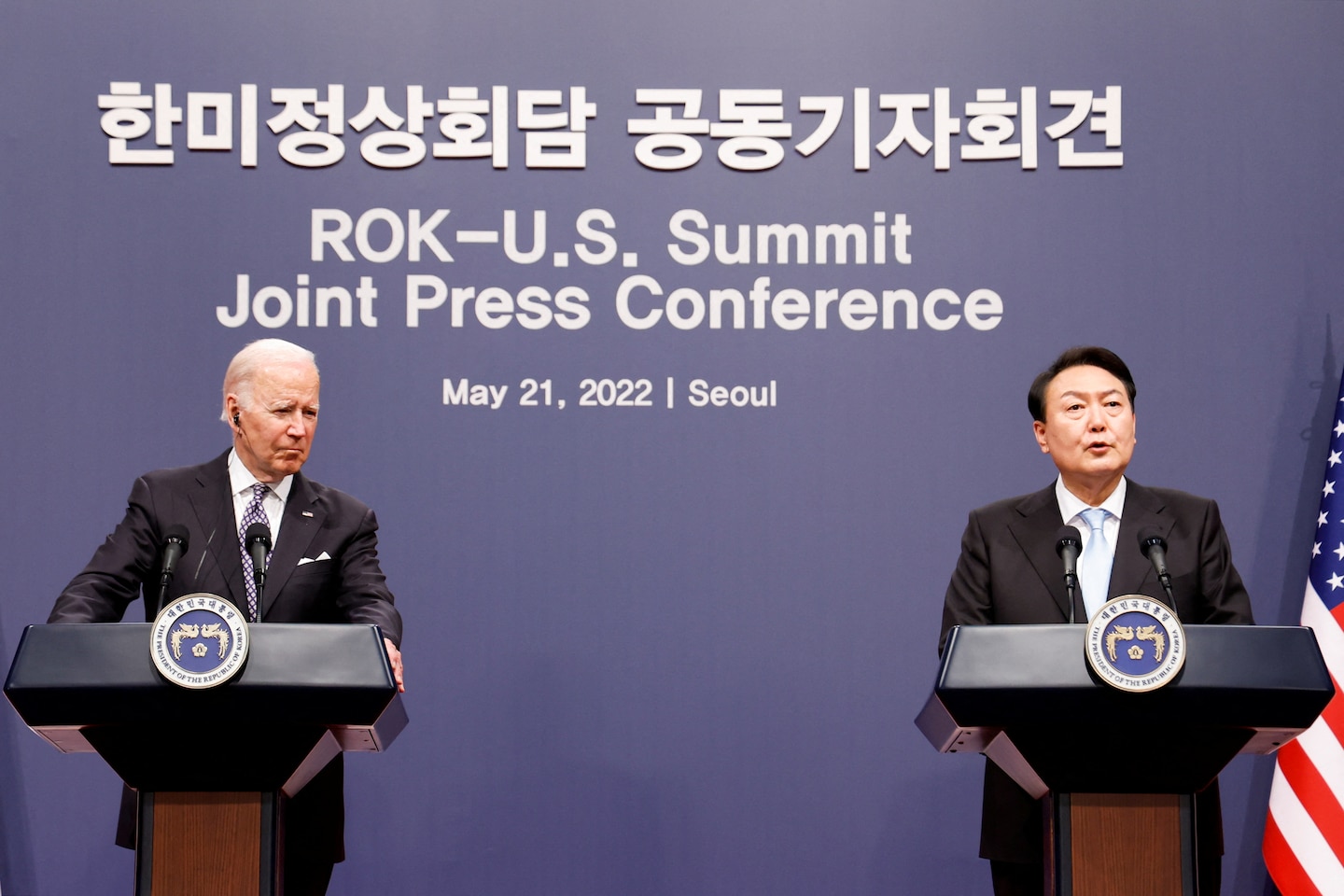 SEOUL — President Biden on Saturday held bilateral talks with South Korean President Yoon Suk-yeol, speaking of the “shared sacrifice” that united the two countries as he sought to bolster the United States’ influence in the Indo-Pacific and blunt the threat from North Korea.

The two presidents agreed to expand combined military exercises with South Korea on and around the Korean Peninsula, which North Korea views as an act of hostility. But Biden also said he was open to meeting with North Korean President Kim Jong Un if the leader of the hermit kingdom was “sincere” and “serious.”

“Our alliance is making important contributions to shape the future for our children,” Biden said of South Korea, “and to create a strong and dynamic economy that is a powerful example for the rest of the world.”

Biden is midway through a six-day trip to South Korea and Japan, an effort to bolster American influence in a part of the world where China’s power and North Korea’s nuclear aims loom large. Biden seeks to use this trip to sell regional leaders on his vision of the U.S. in the Indo-Pacific. But many Asian countries are reeling from the “America First” Trump years and quietly worry Biden’s promises will evaporate after the next election.

Yoon, a former public prosecutor with no foreign policy experience, is the first subject of Biden’s charm offensive. During his campaign for president, he said he wanted a closer relationship with the United States and signaled that he wanted to take a tougher stance on China. Yoon has been in office for a little over a week, and Biden’s journey across the Pacific to meet with him first signifies just how much the U.S. values its relationship with South Korea — and sees potential for it to expand. The American and South Korean delegations met for several hours Saturday, including one-on-one time between Biden and Yoon.

“The alliance between the Republic of Korea and the United States has never been stronger, more vibrant or more vital,” Biden said.

Saturday’s bilateral meeting focused on the military threat posed by North Korea, but the leaders also discussed ways to position South Korea as a bigger player in the Indo-Pacific, both militarily and economically.

Later, Biden will attend a state dinner. During his first official event of the day, he laid a wreath at a cemetery to commemorate people who have died in service of South Korea.

During the meeting, the presidents agreed to identify other areas to deter North Korean aggression, in addition to the military exercises. Both countries will also expand their cooperation to contend with state-sponsored cyberthreats from North Korea.

Since last year, Pyongyang has conducted a flurry of tests designed to diversify and expand its arsenal, as part of leader Kim Jong Un’s five-year plan to develop weapons that are designed to evade existing missile defense systems.

Since U.S.-North Korea diplomatic talks collapsed in 2019, U.S. and South Korean negotiators have urged North Korea to return to negotiations, assuring that they have no preconditions for the North’s return. But the Biden administration has not shown it is willing to grant the sanctions relief that Kim seeks.

U.S.-led international sanctions and U.S.-South Korea joint military drills have fueled North Korea’s complaints that Washington has “hostile policies” toward Pyongyang. Now, with Biden and Yoon vowing to work more closely together on North Korea and other issues, a diplomatic breakthrough appears more out of reach than ever.

Intelligence officials say Kim is planning a new test of an intercontinental ballistic missile that can reach the continental United States. North Korea is showing signs of a potentially imminent nuclear test, which would be its seventh to date and first since 2017.

But the leaders sought to frame their interactions beyond the threat from the volatile country. During their first joint appearance Friday, the presidents toured a Samsung chip manufacturing plant and spoke of strengthening the economic ties between the two countries. Biden is trying to push a top domestic priority for the administration: A sweeping bill meant to boost U.S. competitiveness against China that House and Senate negotiators are scrambling to finalize.

Biden is also confronting a swirl of other challenges during his first trip to Asia that threatened to divert his — and the region’s — attention. U.S. intelligence believes North Korea might conduct a nuclear or ballistic missile test during Biden’s visit. The country is also contending with a covid surge suspected to have hit nearly 2 million people — in an impoverished country with no vaccine program and a fragile health system, which has rejected international vaccine assistance.

Economically, Biden is trying to sell Indo-Pacific leaders on a scaled-down version of the Trans Pacific Partnership, one that involves similar partners, but not the same tariff reductions or access to American markets as its predecessor. He faces steep skepticism throughout the region, especially among those who had reluctantly joined TPP to lower barriers to trade with the United States, but have not been able to do so after the United States pulled out under Trump.

One objective for the United States is to get Yoon, a foreign policy novice, to stick with the agreements made by previous South Korean president Moon Jae-in. The two countries agreed last year on a framework that would broaden their military alliance into one that also includes matters of economic security.

Through it all, observers are watching to see how China reacts to the United States’ charm offensive over one of its regional trading partners.

“Things have changed,” Biden said during the briefing. “There’s a sense among the democracies in the Pacific that there’s a need to cooperate much more closely, not just militarily but also economically and politically.”

What You Need To Know About the New Combat Runner: Ninja Must Die