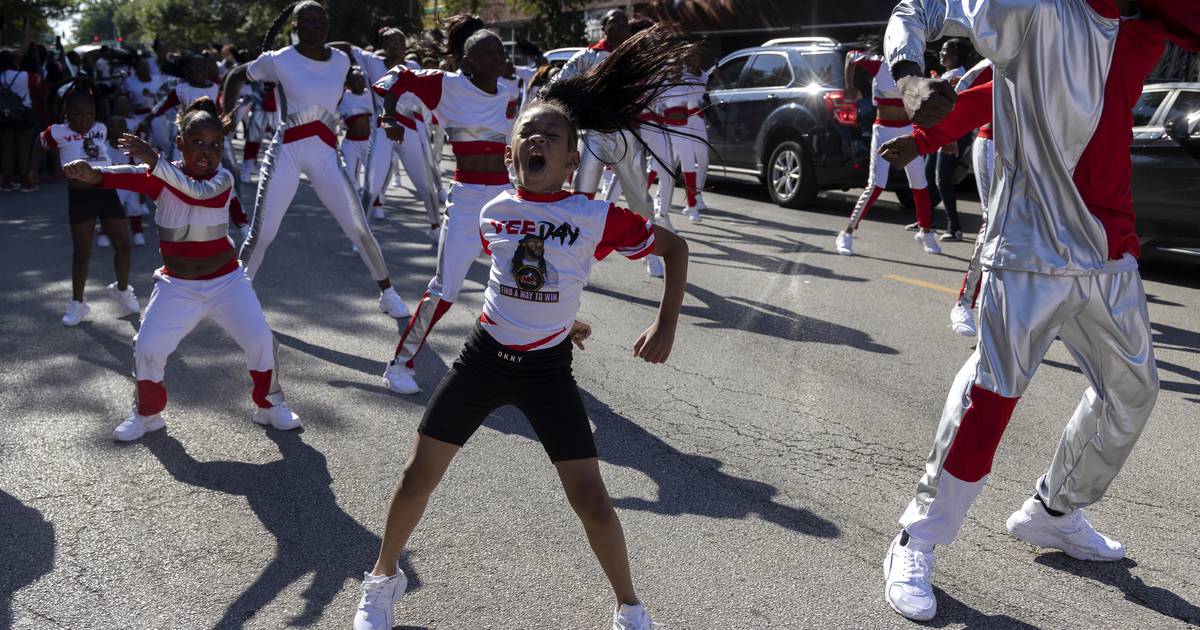 LaToya Smith hustled and bustled around a portion of Grand Crossing Park Wednesday evening as a hot August sun shined on hundreds of people dancing, waiting in line for food and having a good time.

Smith, owner of the Ultimate Threat Dance Org. team, and the rest of the party were at the South Side park celebrating the dance group’s 12th anniversary, just as they had done every year since the group’s Aug. 10 inception in 2010. But even though spirits were high, remembrance was in the air.

Verndell “Vee” Smith II ― a partially deaf but gifted dancer, who mentored generations of kids as an anti-gun violence activist — started Ultimate Threat, in part to help keep kids out of trouble. But in May 2021, the 32-year-old father and beloved dance coach was fatally shot outside a Dunkin’ Donuts in the Park Manor neighborhood, leaving a family in mourning and the dance community shaken.

Police arrested Diontay Kimberly and charged him with one count of first-degree murder in Smith’s death. He is being held without bond. His next court date is Aug. 22, according to the Cook County sheriff’s office.

In the meantime, Smith’s loved ones are committed to keeping his dream alive.

The annual Aug. 10 celebration is now known as “Vee Day.”

“It’s something to look forward to every year, and now it’s a way to keep his memory and name alive,” his sister said.

[ In tribute to slain dance coach Verndell Smith, bundles of balloons released to the sky at spot where he was shot ]

This Saturday, the Ultimate Threat dance team is also set to perform at the Bud Billiken Parade and LaToya Smith said that the plan this year is to go out “with a positive attitude.”

“Last year was really sad for us,” she said. “This year, we’re moving into a more uplifting place. We want to go out there, and we want to show what we have. The kids have been practicing all summer long, and we’re going to give it our all.”

With approximately 50 kids on the dance team, his sister said she hopes her brother’s legacy of giving kids a safe place to spend time and stay off the streets lives on.

“We take all of these young adults, and we give them something positive to do,” she said. “We want to continue to make that happen for the kids and for Verndell.”

She said taking over Ultimate Threat after her brother’s death was “definitely a new world,” but she felt somewhat confident because she had helped her brother with the group from time to time behind the scenes.

Before the party at the park on Wednesday, kids from seven dance teams paraded about 10 blocks toward the park. Latoya Smith said it was good to see more people come out and watch the parade this year as last year it was mostly just the group itself and only three dance teams participating.

Once at the park, people watched more dance teams perform, feasted on food, played games, listened and danced to music coming from a DJ truck and more. Latoya Smith also said the group was able to raise money and buy backpacks to give to students at the festival.

She said she hopes the parade and festival only get bigger and better in the future, and everyone is able to see “the love everybody had for my brother and the love that we have for each other.”

Gloria “Glo” Thomas said she has been a supportive community member of Ultimate Threat since its inception and “became a part of the community family” after meeting LaToya Smith. She said seeing the parade and festival Wednesday and knowing it has grown so much already brought tears to her eyes because “it’s what he wanted.”

She said she hopes “Vee Day” and Ultimate Threat “become something major” for Verndell Smith by getting more kids and people from the community involved and making sure kids are “on the right path.”

“He had been working on this team for 10 ½ years before he got killed,” Thomas said. “It had some recognition but not like it has now. It hurts to know that he’s not here, but his vision was greater than what we saw, so this isn’t it. In order to guide that vision, you got to have a better seat from up top. He has the right person leading the rest of the way, and he grabbed a seat on another level.”

Out on a spacewalk with Nasa astronauts at the ISS