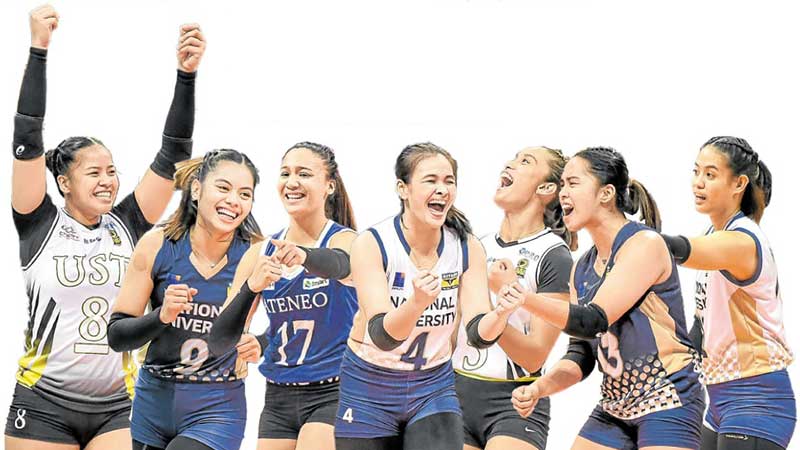 Among the top stars who could be the foundation for the national pool are (from left): Eya Laure, Jennifer Nierva, Faith Nisperos, Mhicaela Belen, Imee Hernandez, Camilla Lamina and Alyssa Solomon. —PHOTOS FROM UAAPMEDIA

The Philippine National Volleyball Federation (PNVF) unveiled the UAAP players they called up for the continental meet in a press launch on Friday.

Belen, who became the first UAAP women’s volleyball player to win the MVP and Rookie of the Year at the same time, led the initial cut with her fellow Season 84 champions from National University, Alyssa Solomon, Jennifer Nierva, Ivy Lacsina, Lams Lamina, and Kamille Cal.

Ateneo’s Faith Nisperos and AC Miner as well as Adamson’s Trisha Genesis and Louie Romero were part of the pool and attended the signing of the PNVF for its new partnership with Akari.

University of Santo Tomas star Eya Laure was also called up along with teammates Bernadett Pepito and Imee Hernandez. Blue Eagle Vanie Gandler, Alyssa Bertolano of University of the Philippines, and California Academy’s Casiey Dongallo and Jelaica Gajero round out the pool. “This is my target. They are really young, so it doesn’t matter who our opponents are. If you remember when I got these guys last year in Thailand, I was thankful for all the coaches working in the UAAP because these guys are too good. Eya, Faith, Belen, they’re really good,” said national team coach Jorge Souza de Brito in the press conference

“All you need is time to work to give them a chance to play at a high level. Our target is making strong of the national team. In the long-term, we have to prepare them. We have to bring them inside, a lot of stars that are really good, but we have to support them cause they are the future,” he added.

PNVF president Tats Suzara bared that he is in talks with the UAAP board, requesting to adjust the league’s schedule as the federation plans to field the young line-up for the 2023 Southeast Asian Games in Cambodia in May.

“We’re in discussion with UAAP board because the calendar next year for SEA Games is May. We’re requesting to have UAAP earlier next year because of SEA Games,” Suzara said. “We’re trying to do this in cooperation with UAAP. But We focus first on the AVC Cup with all collegiate players.”

The PNVF president added that the young national team will face a Chinese squad from the Asian U20 tournament in a scrimmage.

“We have a Chinese team that will play in AVC Cup will come to Manila. They will stay here for a month and they’ll have a regular scrimmage with our team,” he said.

Akari Sports Director Russel Balbalcal and team manager Mozzy Ravena are honored to extend their support to the seniors level after backing the grassroots development of the sport which started in 2015.

“We started the grassroots level, we supported Adamson, we have a professional team, and now, we’re supporting the national team.”

The company has been backing the Adamson University sports program, particularly with women’s volleyball, men’s basketball, and cheer dance, and it is set to field a team in the Premier Volleyball League Reinforced Conference in October.