Before Loretta Lynn died, she asked Mississippi’s Chapel Hart to remake one of her songs 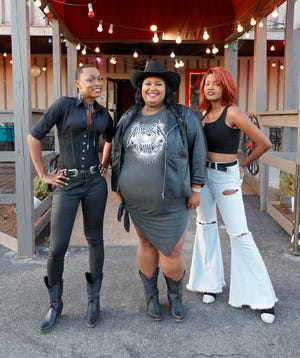 The group from Poplarville had just appeared on their “America’s Got Talent” audition to showcase their South Mississippi roots and share their dream of breaking barriers in the country music genre. Danica and Devin Hart, along with their cousin Trae Swindle, performed an original song called “You Can Have Him Jolene.” The fun ballad is a modern-day twist to the Dolly Parton classic, “Jolene,” where she asks another woman not to take her man.

Chapel Hart blew away Simon Cowell, Heidi Klum, Howie Mandel and Sofia Vergara, prompting all of the judges to hit their “Golden Buzzer” that secured the trio a spot in finals. The group ended up finishing fifth place in the competition, but they wowed celebrities and the rest of America along the way.

Dolly Parton tweeted her support for the women, and Lynn — a country music rebel with numerous awards and hit songs under her belt, including “You Ain’t Woman Enough — chimed in a short time later. “I love it, ladies. Now I’m wondering what you might be able to do with one of my songs,” Lynn wrote on Facebook a few months before she died in her sleep Tuesday at her home near Nashville.

Now, Chapel Hart is honoring Lynn by honoring one of her final requests: putting their own twist to Lynn’s classic “Fist City.” “We know you had to go but don’t you worry, mama, you left country music in good & capable hands!” Chapel Hart posted to Facebook Tuesday, along with a video of their recent performance of the song.

In an interview with the Sun Herald last month, Chapel Hart said having the support of “outlaw women of country” like Parton and Lynn meant the world to them. “We were absolutely just losing our minds the entire day” when Parton and Lynn showed their support, Devyn Hart said.

Justin Mitchell is the Sun Herald senior news editor and works on McClatchy’s audience engagement and development team. He also reports on LGBTQ issues in the Deep South, particularly focusing on Mississippi.