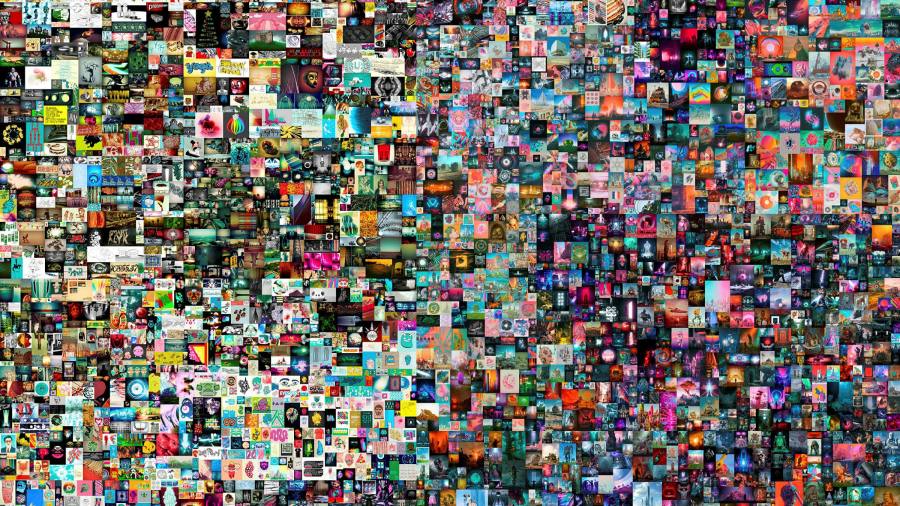 A collage by the contemporary artist Beeple, composed as a single jpeg file, sold for $69.3m on Thursday, according to Christie’s auction house, the latest and most extreme example of the rapidly appreciating market for digital artwork known as non-fungible tokens.

The sale was the first of its kind by Christie’s, underscoring the eye-popping valuations for NFTs, which are unique files encrypted on blockchain to ensure authenticity.

The collage by Beeple is titled “Everydays: The First 5000 Days”, a composite of digital photos taken each day for more than 13 years. The artist, whose given name is Mike Winkelmann, summarised his reaction to the sale with a tweet: “holy fuck.”

NFTs have exploded in popularity among collectors of sports memorabilia and in the cryptocurrency community in recent weeks. An encrypted 12-second clip of the basketball star LeBron James recently sold on a secondary market for $208,000, in a new venture between the National Basketball Association and the consumer blockchain company Dapper Labs.

Still, the Christie’s sale illustrates the stratospheric potential for NFTs. Noah Davis, specialist in postwar and contemporary art at Christie’s in New York, said the auction house has “never offered a new media artwork of this scale or importance before”.

The price tag on the Beeple sale places him among the top three most valuable living artists, according to Christie’s. It also eclipses prices paid for works by other renowned visual artists, such as the impressionist painter Edvard Munch, whose “Girls on the Bridge” sold for $54m in 2016 by Sotheby’s.