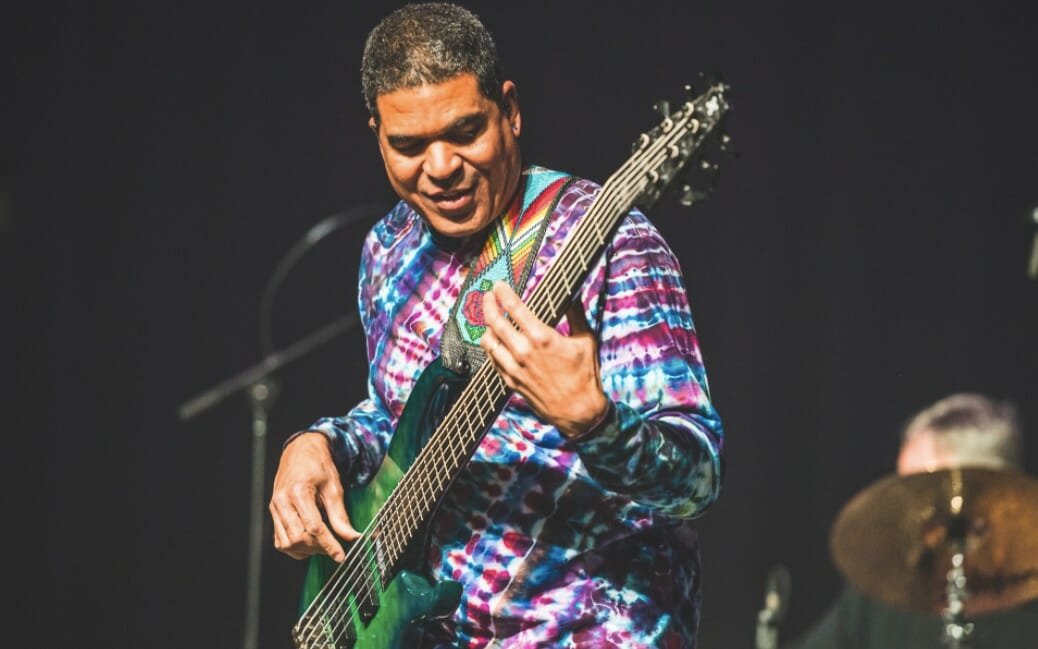 Oteil Burbridge first achieved notice for sometimes wearing a mini-skirt on stage as the bassist for Colonel Bruce Hampton and the Aquarium Rescue Unit. As the band moved away from performance art to focus on its musical interplay, Burbridge was lauded as one of rock music’s best emerging bass players in a band that helped spark the jam band scene.

He joined the Allman Brothers Band in 1997 at the age of 32, and stayed with the iconic band through 2014 when the group decided to retire. He is now the bassist for Dead & Company — the new incarnation of the Grateful Dead that features Mickey Hart, Bob Weir, Bill Kreutzmann and John Mayer — which will kick off a summer tour in June. In the meantime, his solo band, Oteil & Friends, will perform Thursday at the Sweetwater 420 Fest at Atlanta’s Centennial Olympic Park.

The festival, which runs through Sunday, is headlined by the String Cheese Incident and the Trey Anastasio Band. It includes performances by Gary Clark Jr., Brandon “Taz” Niederauer and Umphrey’s McGee.

The Shaky Knees festival is also slated for this weekend at Central Park with a lineup that includes Green Day, Nine Inch Nails and My Morning Jacket.

ArtsATL caught up with Burbridge ahead of the 420 Fest to discuss his musical journey — remembering lessons from Hampton, the Allman Brothers and his big brother, Kofi — the longtime keyboard player with Derek Trucks who died in 2019 at the age of 57.

ArtsATL: I’ve heard you say your connection with music began at age 5. Was there something specific that happened then to spark that connection?

Oteil Burbridge: I started making drums out of things. Bowls, pots, pans, oatmeal boxes, wooden spoons. It was clear to my parents that I had to play drums, so my dad got me a snare drum and some sticks. And he got me a teacher to teach me rudiments because he was like, “You’re going to make music, not just noise.” I couldn’t be stopped, and it needed to be channeled.

ArtsATL: You’ve made your mark as an acclaimed bass player. What drew you to the bass guitar?

Burbridge: Well, that was sort of random. I actually wanted to be a dancer. But, I developed a condition known as Osgood-Schlatter disease when I was 15, which put an end to my dancing and after-school sports. My older brother, Kofi, had bought a bass guitar because he wanted to get into it. He was into all the greats like Alphonso Johnson, Bootsy Collins, Stanley Clarke and Jaco (Pastorius). He loved bass and wanted to play bass but he was away at music school. I just picked up his bass since I was sitting around after school with nothing to do. I couldn’t continue drums because I wasn’t supposed to put any force on my knees. I was just messing around with his bass and picked it up to have some fun.

I began to get better and better on it; I started getting calls to come play because there’s always a shortage of bass guitar players. So, actually, it picked me (chuckles). I wanted to be a drummer and a dancer, but ended up playing bass.

ArtsATL: What would you say was the most invaluable lesson you got from Colonel Bruce?

Burbridge: Oh man, I guess to constantly put yourself on the spot. I’m always telling my kids, “You gotta do it and not be afraid.” I’m always telling myself that. You’re not always ready and you probably feel less than ready more often than you are. But ready doesn’t matter. When the train is leaving, you’re either going to be on it, or off it. So when it’s time to go, you just go.

ArtsATL: In an interview, I once heard you say, “Comfort is death.” After all these years of playing, how do you find ways to stretch yourself to grow so as to feel most alive?

Burbridge: I don’t have to look for it because I’m always throwing myself into different situations. A lot of it comes to me and it is really about me just not saying “No” to it when it does.

ArtsATL: So you consciously walk into unfamiliar musical situations?

Burbridge: Absolutely. Like, if someone calls me for a bluegrass gig, I’ll say, “Sure.” Then, I’ll try to figure it out.

ArtsATL: You were raised in Washington D.C. but made your way to Atlanta as a young man and found yourself in a completely different music scene in the South. Was that uncomfortably exciting?

Burbridge: Yes, it led to my time with the Colonel — introducing me to Delta blues, bluegrass, country, gospel. Because I watched my dad have such a wide array of tastes in music, that mentally made it a natural fit when I got with the Colonel, and it only got further reinforced by him. But digging into the Southern roots blew my mind, for sure.

ArtsATL: When you were 32, you landed the coveted gig of playing bass guitar for the Allman Brothers Band. What do you think they saw in you — especially given the fact that you hadn’t grown up on their music?

I was so into jazz, jazz fusion-rock. I liked people who had a lot of technique and big chops. I had passed right by a lot else, willingly, because I was snobby about it and didn’t understand it. I was too arrogant to realize that, so it really went over my head. When the Colonel taught me what to listen for, I was floored because I knew I had been missing so much more music — including my own music, Black music.

ArtsATL: Might there be another Colonel lesson in there?

Burbridge: Yeah, that sometimes you just gotta live long enough to outlive your mistakes. You don’t know what you don’t know. My kids call me out on so much stuff. And, I have to say to myself, “Well, this is the karma you get from teaching them critical thinking” (chuckles).

ArtsATL: Name a specific thing being with the Allman Brothers taught you.

Burbridge: One of my biggest lessons about this business came from Allman Brothers Band. After having been screwed over in the past, they taught me how, in contrast, what it was to be treated right. They were very good to me in every way but, in particular, they were good to me monetarily and showed me the difference. So I then knew what that looked like — which is an important thing to understand in the music business. They taught me if you don’t know your worth, others will define it for you.

ArtsATL: What does music give you?

Burbridge: There’s three things it must give me. First, it must give me massive joy. Second, healing. Third, an outright exorcism of any built-up demons.

ArtsATL: Aside from music, what most brings you joy and inspiration?

Burbridge: My wife, Jess, and my kids, nature and just other people — like our electrician and our pool guy — who are both great people and I consider to be friends. And, possibilities excite me, like the idea of UFOs and extraterrestrials.

ArtsATL: Your wife, Jess, is a leading expert in gorillas. Have you had any gorilla experiences with her?

Burbridge: I got to go to Africa and track gorillas. It was like going back a million years, like time traveling. It was so crazy. But it was amazing and caused me to see why Jess got the bug to do it. I really can’t wait to go back but it’ll be a while before we can because the kids are still so young at 4 and 7, and not very good travelers yet.

ArtsATL: How might you complete the sentence, “Besides having perfect pitch at age 7, and being an amazing musician, Kofi was the best big brother I could have ever asked for because . . .

Burbridge: Because of his big imagination. And his imagination covered everything from his music to beliefs about aliens and sci-fi. He wanted to be a pilot. He had this program of all the airports, and he’d fly everywhere, virtually. He knew it well enough on the computer that I bet he could’ve gotten in the cockpit and actually flown a plane. He wanted to pilot spaceships. He wanted to go far, far past Earth. Kofi was just wide open and so brilliant — he definitely had a wondrous, beautiful mind.

ArtsATL: In the end, what knowledge would bring a smile to you about your time spent on Planet Earth?

Brenda Stepp is an Atlanta freelance writer who has written extensively about the jam band scene.

Review: Atlanta Ballet’s “Fancy” caps season with fresh takes on the past