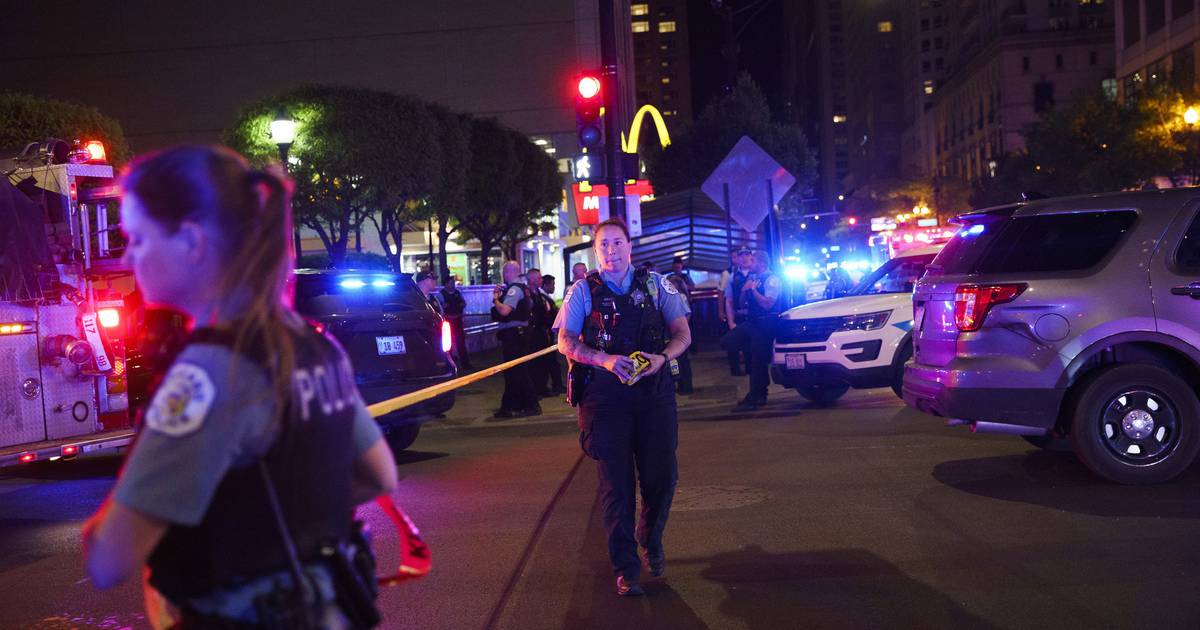 Calling last week’s mass shooting in the city’s Near North Side “a massacre in the middle of Chicago and State,” a Cook County judge on Sunday denied bail for the 21-year-old alleged gunman and a buddy who allegedly took the murder weapon moments after it was used to kill two men and wound seven others.

Judge Susana Ortiz approved requests to hold both men without bail, citing multiple surveillance videos that captured the shooting and their group’s attempt to escape into the CTA Red Line subway station at 800 N. State St.

The shooting came during a time of public uproar over recent large disturbances taking place downtown, including a fatal shooting at Millennium Park’s Cloud Gate sculpture. The violence led Mayor Lori Lightfoot to bar minors from the park on weekends and moved the curfew to 10 p.m.

During a lengthy bail hearing broadcast on YouTube, prosecutors laid out their case that alleged Sanders callously fired dozens of shots into a crowd steps from the subway entrance and Abram took the gun and Sanders’ sweatshirt moments after the shots were fired.

The shooting occurred about a half-hour after a fight between Sanders’ group, which included Abram, and another group that included the two men killed near a McDonald’s. During the earlier incident, a shot was fired and the groups fled when a police sergeant arrived, said Assistant State’s Attorney James Murphy. Authorities didn’t provide a reason for the dispute but said a gun was later found underneath a mailbox nearby.

Just after 10:30 p.m., both groups remained in the area and were walking separately toward the Red Line station entrance when Sanders allegedly pulled a handgun from his waistband, turned and fired 21 shots on the group behind his, Murphy said.

Sanders is accused of taking deliberate aim and shooting victims while using his free hand to steady his weapon, which was outfitted with a switch to fire automatically, Murphy added. After the shooting, Sanders’ group fled into the underground station. Abram was captured on video taking the gun and a sweatshirt from Sanders in return for Abram’s sweatshirt, authorities said.

After the group climbed down to track level to cross over to another platform, Sanders’ girlfriend received a severe shock and burns when she fell onto the third rail, according to Murphy. She remained hospitalized.

Sanders took back his sweatshirt and was putting it back on when he encountered police and falsely told them that the gunman had fled in the opposite direction, Murphy said. He fled into the subway tunnels but was taken into custody. Abram was also arrested at the station and a handgun was recovered at the scene, authorities said. The bullet casings found at the scene matched the gun, Murphy said.

Following his arrest, Sanders admitted firing on the group, saying he “had no choice,” because they fired on him first, Murphy said. Video didn’t show anyone in the second group with a weapon, Murphy added.

The shots struck eight men and one woman. Anthony Allen, 31, and Antonio Wade, 30, were killed, according to prosecutors. As of Sunday, one of the victims remained hospitalized with a critical gunshot wound to the chest, Murphy said.

The men’s court-appointed attorney, Samantha Petitti, argued that the state’s case lacked clear premeditation and that Abrams wasn’t a threat to the community, lacked a criminal background and wasn’t linked to firing the weapon.

But Murphy countered that Sanders’ “intention is clear. He fired 21 shots, aiming at specific individuals.” On the claim that Abram wasn’t a threat to the public, Murphy added: “I think that the nine people that got hit by those bullets … would disagree with that, not to mention all the other people out there at McDonald’s just enjoying downtown.”

In denying bail, Ortiz cited the significant video evidence linking both men to the scene and noted Abram’s “willingness to accept the murder weapon and continue to engage in flight.”

“He willingly stood with Mr. Sanders and participated in this … a massacre. There’s no other way to describe it than a massacre in the middle of Chicago and State on that date and time.”

If convicted, Sanders faces a possible life sentence. Both men are scheduled to return to court later this week.

Boy, 15, shot and killed in Austin near a school, police say