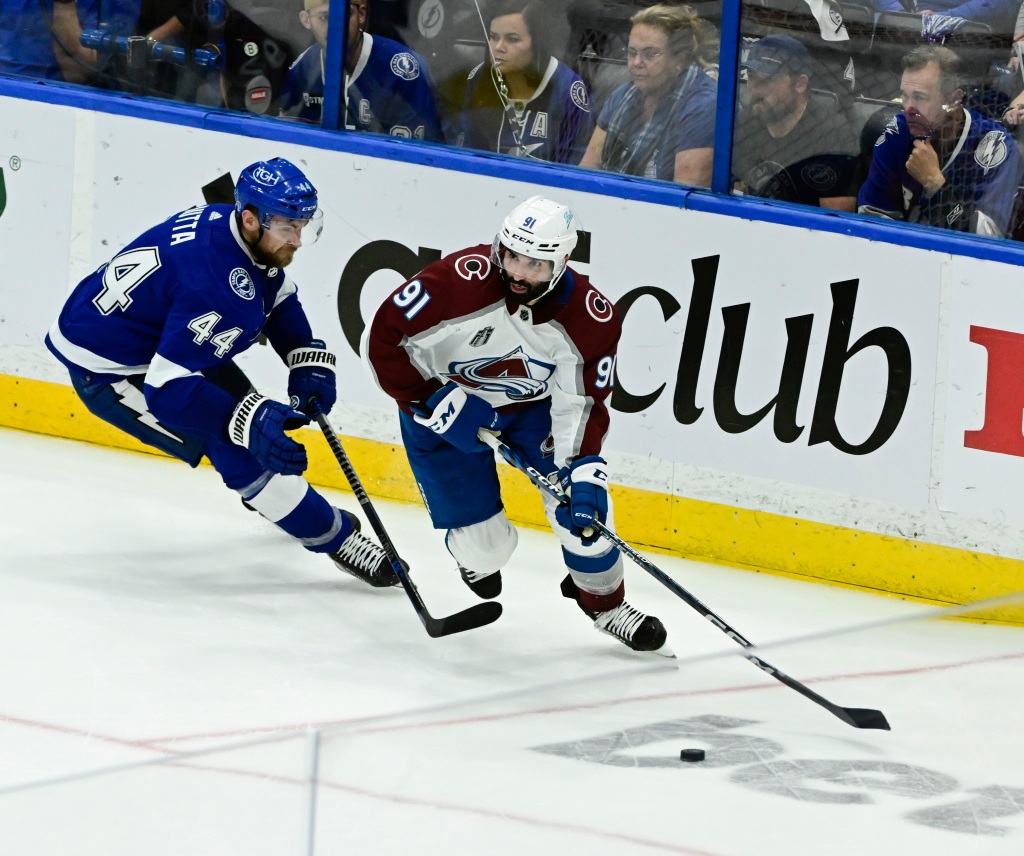 The Colorado Avalanche host the Tampa Bay Lightning in Game 5 of the Stanley Cup Final on Friday night at Ball Arena, with the Avs 60 minutes away from hoisting the Cup for the first time in 21 years. Stick here for live updates leading up to and during the game. Refresh to see our latest analysis.

“This is legendary.” (5:30 p.m.): Crowds outside Ball Arena began to grow with about an hour until puck drop despite light rain falling in Denver. AJ Endres, a 36-year-old Northern Colorado resident in a Gabe Landeskog jersey, walked inside the doors carrying a homemade Stanley Cup.

The makeshift trophy stands about three feet tall and is made from an empty five-gallon water jug, a few cheap party bowls, a handful of screws and silver spray paint. Endres pasted on the years 1995-96, 2000-01 and 2021-22 (with a question mark). Plus an Avalanche sticker for extra style points.

“This is legendary,” Endres said. “I am beyond excited. I’ve been jittery and nervous all day. I can’t wait to get in there and see what happens tonight. I play hockey and I’ve been a fan of the Avalanche since they moved here back in ’95. Lived through both of our Cups back in the day. Twenty-one years is a long time.” — Kyle Fredrickson

Joe Sakic sighting (5:24 p.m.). I was on the phone with my son outside the press-box elevators when one of them opened and Super Joe was inside. His stop wasn’t on that floor but we waved at each other and the door closed. That brought me back to 21 years ago. I covered Game 7 of the SCF behind seats on the main concourse at what then was called the Pepsi Center. I was like the third or fourth reporter working that night and I was moved to the auxiliary area. It was a great spot! Memories of the final seconds of the third period, the sensational environment and Super Joe accepting the Cup from commissioner Gary Bettman and immediately handing it off to Ray Bourque was  an unreal experience. Will Super Joe hoist the Cup for the third time tonight? — Mike Chambers

Championship duds (5:14 p.m.): Pictures of dudes in suits, because we know what the people want. — Matt Schubert

Few teams can relate to Avalanche’s one-win-from-Cup situation, but the Lightning can

Few teams can relate to the situation presented to the Avalanche on Friday night, needing to grind out one more win to hoist the Stanley Cup.

And few coaches can relate to the situation the Avs’ Jared Bednar is in, needing to construct one more game plan to see his players celebrating on the ice.

Avalanche forwards Nathan MacKinnon, Nazem Kadri and Gabe Landeskog did not participate in Friday’s morning skate ahead of Game 5 of the Stanley Cup Final. But Avs coach Jared Bednar said they were each taking maintenance — meaning they are preparing in other ways and should be in the lineup against the Tampa Bay Lightning. — Mike Chambers

After he stopped 37 shots in Wednesday’s Game 4 of the Stanley Cup Final, Kuemper received the secondary assist on Nazem Kadri’s overtime goal, capping his night of redemption. — Ryan O’Halloran

Keeler: Nathan MacKinnon, Andrew Cogliano, Avalanche made their own “luck” vs. Tampa Bay in Game 4. No matter what Lightning fans say.

Luck had nothing to do with Nathan MacKinnon getting himself enough space to park like a Rolls Royce on Andrei Vasilevskiy’s stick side, the heel to our deified Tampa Bay goalie’s Achilles.

Luck was on a coffee break when Andrew Cogliano, 177 pounds of pure guts, 5-foot-10 with 6-5 spunk, refused to budge from the crease, even though the Avalanche forward had Lightning defender Jan Rutta — all 6-2, 211 pounds of him — draped all over his back. — Sean Keeler

Who should be named the playoff MVP if the Avalanche happen to win Friday night? With so many good options, this is no easy choice. Read more from The Post’s sports staff.