Avalanche turns soft as butterscotch pudding with chance to hammer St. Louis out of NHL playoffs 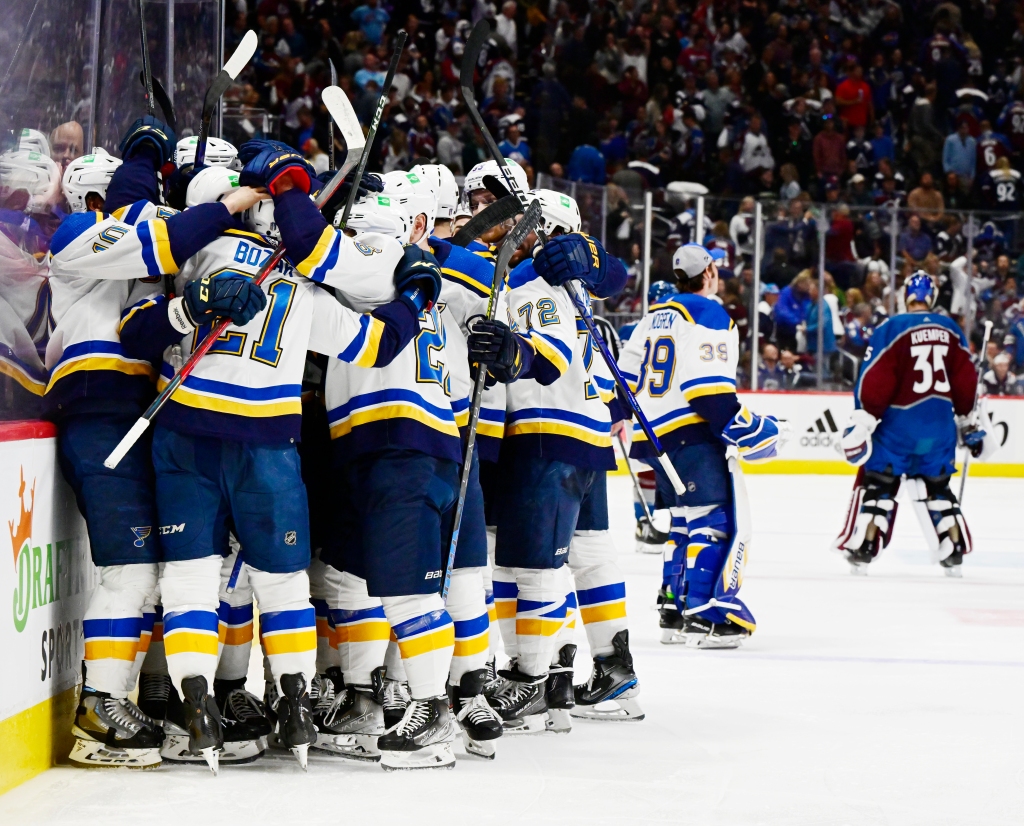 Stanley Cup champions are as stone cold as ice.

In a 5-4 overtime loss, when Colorado coughed up a three-goal lead and failed to eliminate St. Louis from the NHL playoffs, the Avs were as soft as butterscotch pudding.

What was revealed Wednesday night, which should have been a hat-tossing celebration of Nathan MacKinnon as the most electric hockey player in the world?

As talented as the Avs are, they haven’t learned how to close the deal. When they should’ve been the hammer, they were the nail. That’s on all of them, including coach Jared Bednar, who didn’t keep his foot on the gas when Colorado had a chance to end this best-of-seven series in Game 5.

“You’re either the hammer or the nail,” said Bednar, who lamented the Avalanche’s inability to maintain its aggression in the offensive end when playing with a late lead.

Over the course of the final 13 minutes, 41 seconds, of the third period and overtime, which ended when St. Louis fourth-line grinder Tyler Bozak befuddled and beat Colorado goalie Darcy Kuemper with a score from just inside the blue line, the Avalanche was outscored 4-1 by a team that should’ve been sent packing to the lake for the summer.

“It’s character and leadership. We have a lot of character in that room. This team has come from behind quite a bit in games this year, so they don’t give up,”  said St. Louis coach Craig Berube, who belatedly took a stance against the hate Blues fans showered on Colorado center Nazem Kadri when the Avs won two straight games in Missouri.

Talk about adversity building the fight in a champion, if that makes you feel better. But blowing a big lead is simply unacceptable on home ice, on a night when MacKinnon scored a hat trick, including a coast-to-coast goal late in the third period that evoked the magic of Wayne Gretzky.

“Sometimes, you get on your heels a little bit,” said MacKinnon. He was the one Colorado player who can’t be blamed for watching the scoreboard clock and hoping time would run out on St. Louis.

With St. Louis goaltender Ville Husso on the bench, the Blues sent the game to overtime when Colorado defenseman Cale Makar and Kuemper both failed to find the loose puck in the goal mouth, allowing Robert Thomas to poke home the tying score with a mere 56 seconds before a huge party was set to erupt in Ball Arena.

Landeskog had a chance to end the game with the puck on his stick, Blues defender Justin Faulk closing in and an empty St. Louis net ahead of him late in regulation.

“We just didn’t get it done,” Landeskog said.

You’re either a hammer. Or butterscotch pudding.

With the Avs inexplicably playing on their heels for much of the third period, they needed Kuemper to save them from a relentlessly desperate St. Louis team.

Put simply: If Colorado needs Kuemper to stand on his head to win the Cup, we’re all going to be crying in our beer. He’s no Patrick Roy. Nobody is ever going to christen him Saint Darcy. With one more loss in this series, the Avs could officially have a goaltender controversy, which is a place no team wants to be heading into the pressure of a Game 7.

In an effort to sweep the clutter of doubt and fear from the inside of his players’ noggins, Bednar has insisted the Avs are playing against St. Louis, not the second-round jinx that has knocked his team from the playoffs year after year.

The Blues aren’t better than Colorado. But they might be mentally tougher.

Hey, stuff happens in the playoffs. The two losses against St. Louis, however, showed some of the same old stuff that got Colorado eliminated by Las Vegas in the second round a year ago.

Colorado has two shots to win once and advance to the franchise’s first appearance in the Western Conference finals in more than 20 years.

The only thing the Avs have to fear? The butterscotch pudding between their ears.