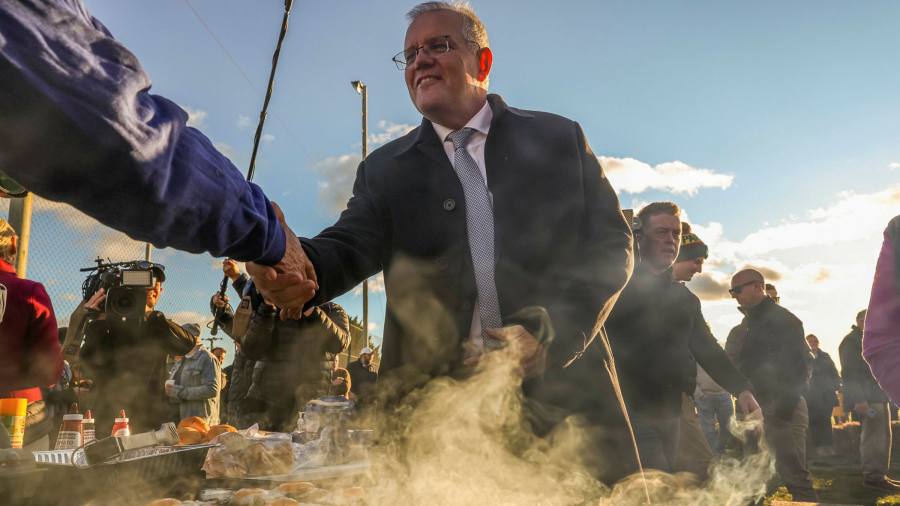 Australia’s election is on a knife-edge as voters cast their ballots, with the final opinion polls of the campaign providing hope for the government of Scott Morrison after weeks of trailing opposition leader Anthony Albanese.

The prime minister was behind in opinion surveys but expectations of an outright victory for the opposition Labor party have lessened after predictions of a hung parliament hovered over the six-week campaign.

Albanese’s party needs to gain seven seats for him to become the first Labor prime minister since 2013. His team has visited 20 marginal seats in the past week in a last-minute pitch for wavering voters. Morrison has focused his final push on a new housing policy and a fall in unemployment to the lowest level in almost 50 years.

Polls published on Friday by Roy Morgan and the Australian Financial Review showed Albanese leading by a ratio of 53 to 47, sharply down on the previous week, based on the preference voting system where backing for unsuccessful candidates is redistributed until a winner is declared.

The Roy Morgan poll also forecast direct support for both major parties would fall below 40 per cent for the first time since 1906, reflecting a sharp rise in backing for independent parties. These include the leftist Greens, on track for their best electoral result, and rightwing parties such as the United Australia party, which has run on a “freedom” campaign to tap into frustration over pandemic lockdowns.

“This is the most unpredictable election ever. It’s like 151 by-elections,” said Nicholas Reece, principal fellow at the Melbourne School of Government and an ex-strategy adviser to former Labor prime minister Julia Gillard.

Tasmania, Australia’s smallest state, has become a crucial battleground, with both Morrison and Albanese making frequent trips to the island in recent weeks as three of its five seats — Bass, Braddon and Lyons — are at play.

“If Labor can reclaim Bass and Braddon then they are pretty well-placed nationally,” said Richard Eccleston, professor of political science at the University of Tasmania. Bass is the most marginal Liberal-held seat in the country and, having switched sides in every election over the past 20 years, is seen as a “bad place to build a career in politics”, he added.

The constituency has symbolic value for Morrison. On the morning of the election in 2019, he served “democracy sausages” to voters in Launceston, the state’s second city. The Liberal party won the seat by a margin of 0.4 per cent and helped push Morrison to a “miracle win” after he had trailed in the polls for most of the campaign.

Morrison was back on the offensive in Tasmania two days ahead of polling day this year. Speaking in the Labor-held seat of Lyons, he claimed there was a “hole in Labor’s bucket when it comes to their economic management”.

Albanese has also targeted Tasmania; on Friday he was in Launceston urging voters to switch back to Labor. “Bass is a seat that changes hands from election to election and I really do hope it changes hands again,” he said at a rally.

Eccleston said the opposition leader had a strong chance of taking back Bass and Braddon, as second preferences for a new party founded by Senator Jacquie Lambie would flow to Labor. “Tasmania is about small politics and big personalities,” he said.

But Tasmania has not been a smooth campaign stop for either candidate.

Albanese endured a dismal start to his election run in Launceston when he failed to remember the unemployment and interest rates. Morrison, meanwhile, was confronted by a former diplomat at a local cheese shop over the Solomon Islands’ security pact with China, which has challenged the prime minister’s credibility on national security.

The prime minister — who has described himself as a “bulldozer” — also crash-tackled a seven-year-old boy to the ground this week while playing football. Luca Fauvette, the unfortunate player, told reporters “it should have been a penalty” when asked about his brush with politics.

Morrison on a visit to Perth admitted the election would go down to the wire, saying: “Elections in Australia are always very close. It’s very rare that you get big, big changes.”