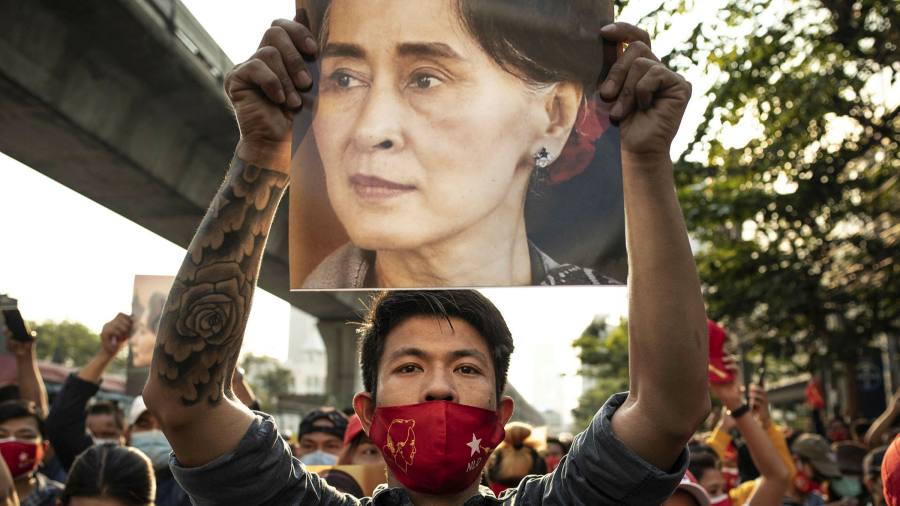 Aung San Suu Kyi is under house arrest in the Myanmar capital Naypyidaw, a day after the coup that overthrew her government, according to two people with knowledge of the situation.

The people asked to not be named because they fear the steps the military might take against Myanmar’s elected leader or the hundreds of other government officials who were detained after the putsch on Monday.

The coup has brought back grim memories in Myanmar of its decades of military rule and economic stagnation, when the country fell far behind its Asian neighbours in economic development, education and health.

However, the new junta has taken pains to project an image of normality. Tuesday’s edition of the government-owned Global New Light of Myanmar newspaper included a photo of General Min Aung Hlaing, the military commander-in-chief, presiding over a group of green-uniformed officers.

After being cut off in the first hours after the coup, internet services were mostly running on Tuesday in Yangon and other big cities, but most mobile phone services were still down.

The coup was condemned by the US, EU and UN, with the Biden administration threatening to impose sanctions on the country.

It seems there has been a clear intention to assure it’s business as usual, and business continuity

The putsch was launched as one of Asia’s poorest countries was already struggling with the health and economic impacts of Covid-19. After reporting a rise in coronavirus cases last year, new infections had been falling and the country began a vaccination programme last week.

Gen Min Aung Hlaing’s office has vowed to maintain the vaccine programme, saying it would be “effectively carried out with momentum”. It also promised to help businesses hit by the pandemic and restart a peace process with ethnic minorities that stalled under Aung San Suu Kyi’s administration.

“Things are still fresh and raw and so we are still assessing,” said Melvyn Pun, chief executive of Yoma Strategic Holdings, a conglomerate with businesses in real estate, financial services and consumer goods. “It seems there has been a clear intention to assure it’s business as usual, and business continuity.”

Branches of the group’s Yoma Bank reopened on Tuesday after closing the previous day when the telecoms shutdown disrupted ATMs, he added. Other banks also opened for business, with limited withdrawals.

Human rights groups were struggling to establish basic facts about the whereabouts of the detained individuals. Some government officials appeared to have been offered the chance to resign voluntarily after the coup, including Myint Htwe, the health minister.

The ruling National League for Democracy published a statement on Monday attributed to Aung San Suu Kyi that called on citizens to reject the coup and “resist it accordingly”. There were no immediate reports of large demonstrations in a country that has seen significant protests by civil society activists, Buddhist monks and other groups after past crackdowns.

Analysts, however, warned that the situation was volatile.

“We are in a situation where there was already a lot of dry tinder from the economic impact of Covid and a lot of people suffering, especially the most vulnerable,” said Richard Horsey, a political analyst and Myanmar adviser to the International Crisis Group.

“The fact that this country in the last few months hasn’t seen more anger being expressed openly is because people had a government they trusted and a leader they adored, and now that’s all done.”