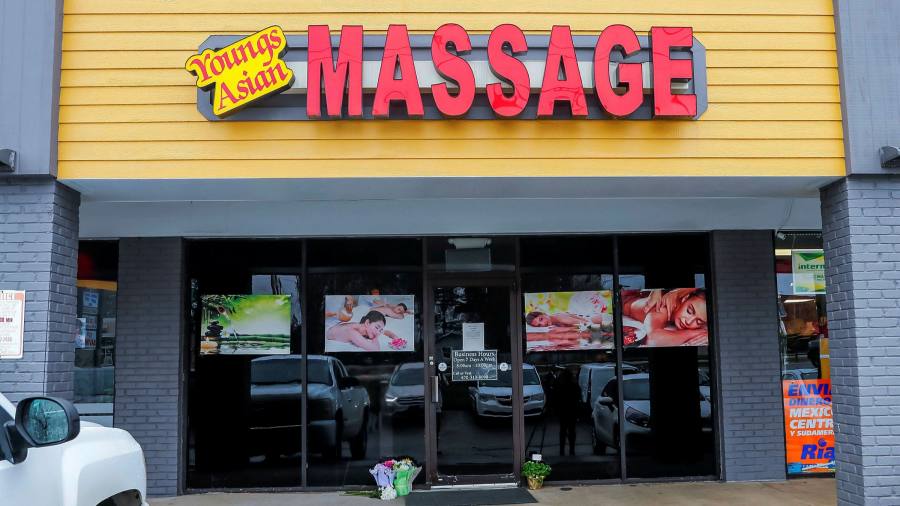 Senior lawmakers in Washington decried violence against Asian Americans on Wednesday, after at least eight people were killed in a series of shootings in the Atlanta area that have amplified concerns about a surge in hate crimes.

Law enforcement officers in Georgia arrested a 21-year-old man in connection with the shootings at three spas and massage parlours late on Tuesday. Several of the victims were Asian-American women, although police said the suspect indicated the killings were not “racially motivated”.

“Our country, the president and I and all of us, we grieve for those lost,” Kamala Harris, the vice-president, said on Wednesday. “The investigation is ongoing, we don’t yet know, we’re not yet clear about the motive. But I do want to say to our Asian-American community that we stand with you.”

Jen Psaki, the White House press secretary, said President Joe Biden would be briefed by Merrick Garland, the US attorney-general, and Christopher Wray, the FBI director, on the shootings. The FBI is working with local law enforcement teams to investigate the incident.

Biden later said the investigation was “ongoing”, but added: “Whatever the motivation here, I know that Asian Americans are very concerned, because as you know, I have been speaking about the brutality against Asian Americans for the last couple of months and I think it is very troubling.”

At a press conference in Atlanta on Wednesday morning, Rodney Bryant, the city’s acting chief of police, did not rule out calling the shootings a hate crime.

“We are still early in this investigation, so we cannot make that determination at this moment,” Bryant said. “Even though we have made an arrest, there is still a lot more work to be done.”

But law enforcement officers in neighbouring Cherokee County, where one of the shootings took place, said the suspect had taken responsibility for the killings but claimed they were “not racially motivated” and cited a possible “sex addiction”.

“He apparently has an issue, what he considers a sex addiction, and sees these locations as something that allows him to go to these places, and it is a temptation for him that he wanted to eliminate,” Captain Jay Baker, of the Cherokee sheriff’s office, said.

Keisha Lance Bottoms, the mayor of Atlanta, said she would not “get into victim blaming”, adding: “As far as we know in Atlanta, these are legally operating businesses that have not been on our radar.”

She said law enforcement had “determined that the suspect was on his way to Florida . . . perhaps to carry out additional shootings”.

“As tragic as this was . . . this could have been significantly worse,” Bottoms added.

“Obviously, whatever the motivation was for this guy, we know that many of the victims, the majority of the victims, were Asian. We also know that this is an issue that is happening across the country. It is unacceptable, it is hateful, and it has to stop.”

The mayor’s comments were echoed by Democrats and Republicans on Capitol Hill.

“The motivations behind this devastating tragedy are still unknown. But there is a legitimate concern that these killings may have been racially motivated,” Chuck Schumer, the Democratic Senate majority leader, said on the Senate floor on Wednesday, citing rising numbers of crimes against Asian Americans since the start of the Covid-19 emergency.

Critics have blamed Donald Trump for spreading racial hatred by labelling the virus the “China virus” and the “Wuhan virus”.

“Over the past year, the Asian-American community has faced a rising tide of abuse and violence in the wake of Covid-19, driven by ignorance, by misinformation, and by age-old prejudices,” Schumer added.

“The increase in violence against Asian Americans is alarming, vile and un-American,” said Marco Rubio, the Republican senator from Florida.

The House judiciary committee will on Thursday hold a hearing on discrimination and violence against Asian Americans, which Biden has vowed to stop.

“There has been a long history of anti-Asian racism in the United States, especially during times of social or economic unrest. Unfortunately, since the onset of the Covid-19 pandemic, this bigotry has reared its ugly head once again,” said Jerrold Nadler, the Democratic congressman from New York, who chairs the committee.