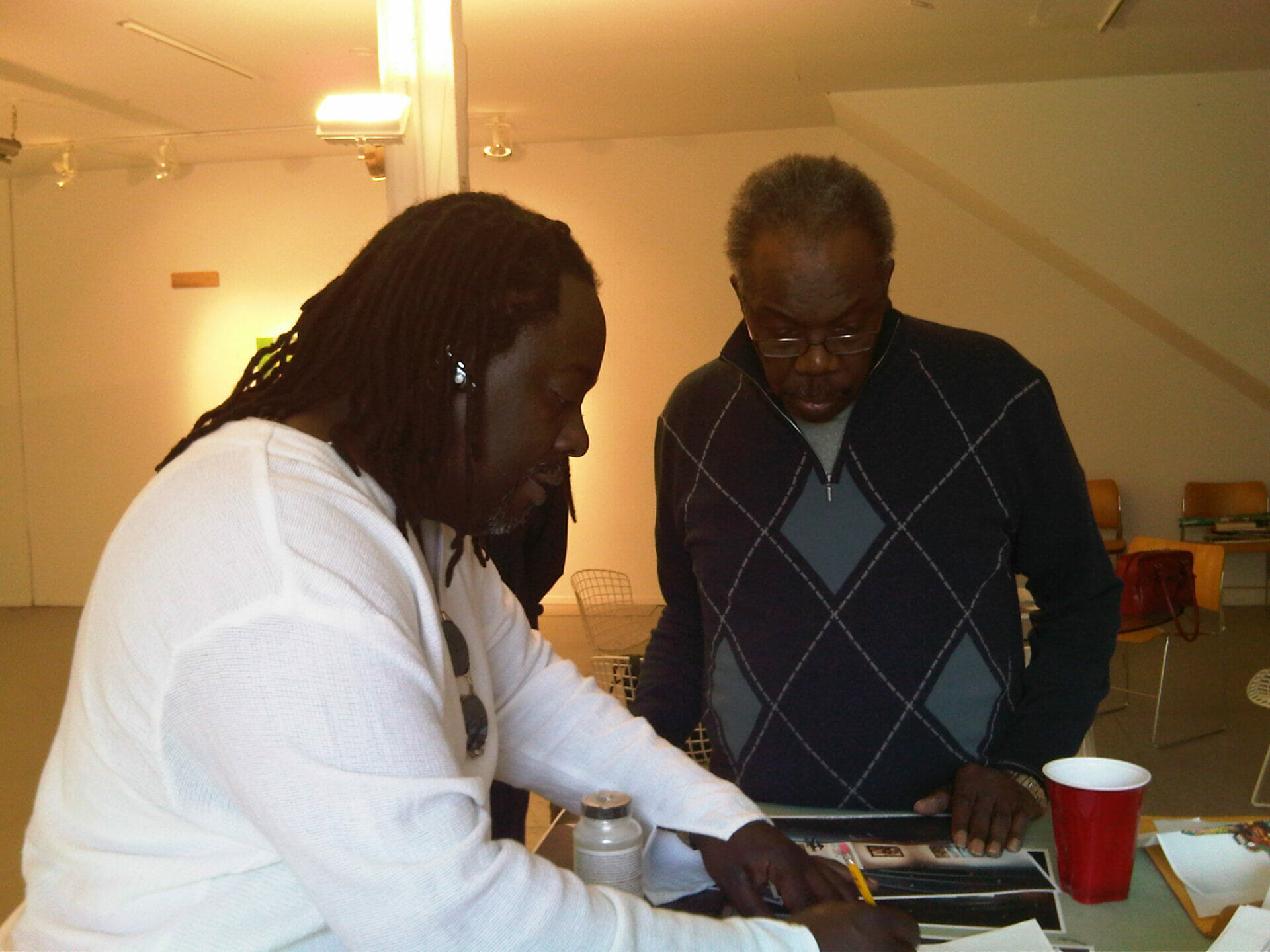 Editor’s note: Mississippi-born Sam Gilliam, a pioneering abstract painter best known for his luscious Drape paintings, died last Saturday at his home in Washington. He was 88. This story was originally published in the Atlanta Journal-Constitution in November 2010.

For more than 15 years, Fairburn artist Kevin Cole considered it his great fortune that Sam Gilliam, an undisputed giant of African American art, was willing to serve as an informal mentor.

But with “Protégé: Sam Gilliam and Kevin Cole,” an exhibition on view through Jan. 23, 2011, at the Harvey B. Gantt Center for African-American Arts and Culture in Charlotte, the older artist and his disciple have finally evolved into equals.

“I tell my wife, this is like being on cloud nine,” said the 50-year-old Cole, an art instructor at Fulton County’s Westlake High School. “He’s so well respected. I’ve gotten calls from artists from all over the country wanting to know, ‘How’d you get Sam to show with you?’ It’s so humbling.”

Cole’s wife Karen, in fact, was a central figure in the first bit of advice that Washington artist Gilliam, now 76, gave the younger man when they met in 1994. Gilliam was serving as a juror of an exhibit at Chattanooga’s Hunter Museum of American Art, and included work by the Atlanta artist. With his then-girlfriend Karen, Cole attended the opening so he could meet Gilliam, whose career he had followed since the late ’70s when Cole was studying art at the University of Arkansas-Pine Bluff.

Gilliam “said he liked my work, but I needed to push my materials, work larger. And he told me I needed to marry my girlfriend,” Cole recalled with a deep laugh.

Cole took Gilliam up on both suggestions, which have worked out well. Now a father of two, he’s been married to Karen for 11 years, a period in which his career has prospered. Cole now has more than a thousand pieces in museum, corporate and private collections, including the Smithsonian’s National Museum of African American History and Culture and those of several former NBA stars including Michael Jordan.

Gilliam, famed as an inventive colorist who in the late ’60s tore his canvases off the wall and turned them into draped sculptures, meanwhile has continued to be highly collected, commissioned and exhibited, including a Corcoran Gallery of Art retrospective in 2005 that traveled to four other museums.

After that initial meeting at Chattanooga’s Hunter — documented in the “Protégé” catalog with a fuzzy black-and-white snapshot of a buzz-cut Cole listening intently to his hero — the younger artist stayed in touch.

Then, in 1996, Cole was showing at Washington’s International Visions Gallery, and a newspaper referred to him as “the second coming of Sam Gilliam.”

“That scared me,” Cole admitted. But it also made him want to know Gilliam on a more personal level. A long-time friend of Cole’s who had collected both artists’ work, then-Washington Wizards coach Darrell Walker, set up a weekend visit in 1998 for the Atlanta artist at Gilliam’s Washington home.

“One of the best weekends I ever had in my life,” Cole said. “We talked about art the whole weekend. He showed me books and books and magazines about art. We discussed galleries, museums, who should see my work and why.”

Many Washington visits have followed, and Cole has called his mentor at least twice a month and sent him printed-out images of his works-in-progress for critique. “It’s real, real valuable,” Cole said.

Yet in an interview from Washington, Gilliam downplayed the significance of his feedback. “I don’t know,” Gilliam said when asked if he’s had a hand in Cole’s evolution. “I think Kevin is very aggressive on his own. He works hard, shows all over the country. I think he’s following himself while knowing not only me but other artists and sculptors.”

Gilliam’s reticence likely stems from the fact that he’s a strong individualist — “I’d rather be like a tree that just grows silently,” he said — and from his belief that Cole has his own story to tell. Indeed, much of the Atlanta artist’s work is rooted in something his elderly grandfather told Kevin when, as an 18-year-old, he was reluctant to register to vote because he didn’t think it would make a difference.

Sam Cole Sr. knelt down with his cane and drew a map in the Arkansas soil showing his grandson where to go stand by a tree. “I did that and came back and told him that I had a real scary feeling.  It was like people were watching me,” Kevin Cole recounted. “He told me that African Americans had been lynched by their neckties on their way to vote. And it’s been documented in books that not far from there, in a town called Star City, a number of lynchings took place.”

Heavily patterned and richly hued neckties, which curl and entwine, have been a recurring motif of Cole’s wall-mounted sculptural paintings for decades. But for “Protégé,” the artist took his, well, protege’s advice and pushed his work. Several of the monumental pieces (the largest, nearly 9 feet) have been liberated from the wall and hang from the Gantt Center’s ceiling.

When he sent Gilliam printouts of those in progress, Cole was surprised by the advice: “Kevin, you can stop now.”

Said Gilliam from Washington: “Some of his work at this point, I’d die for.”

To Kevin Cole, the death of his friend and fellow artist Sam Gilliam felt like he had lost a beloved family member. “Sam was like a father to me,” Cole said on Tuesday. “The world has lost a true hero.”

Cole said Gilliam was “my biggest critic” — but the Atlanta artist didn’t mean that in the usual negative way. That’s because his Washington, D.C., protégé would give Cole the honest feedback that he sought.

“One thing Sam always said to me is, ‘You never want to be where you were yesterday,’ recalled Cole, 62. “Always push your work.”

Included in major museum and private collections across the country and with public art works in many cities included on his expansive curriculum vitae, Cole is a 2021-22 MOCA GA Working Artist Project fellow. An exhibit that is the fruit of that fellowship, “Where do we go from here?” opens at the Buckhead museum in August. Cole also is a featured artist in the inaugural group exhibit “ARTcestry: Building Legacy Beneath the Struggle,” at Privi Art Gallery at the Mall at Stonecrest through July 31, and has works available at East Point’s new Black Art in America gallery. He is represented in Atlanta by September Gray Fine Art Gallery in Buckhead.