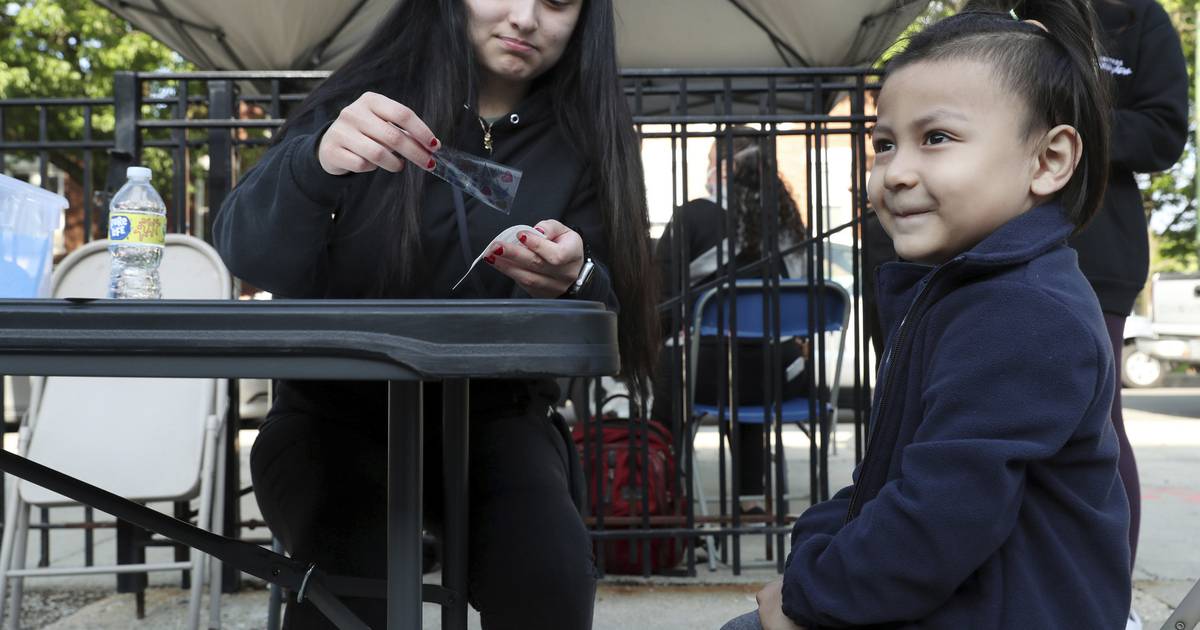 Children danced and played carnival games outside McCormick Elementary School in Little Village on a recent evening, shooting a basketball, getting temporary tattoos, painting a tiny planter and knocking wooden bowling pins off a stool with a baseball.

Mayra Flores pushed her 4-month-old in his stroller while keeping an eye on her 12-year-old who stood in line waiting to toss rings onto rows of bottles. Flores said she was shocked to see there would be an event at the school, knowing there’s a lot of gun violence on the surrounding blocks.

“I was kind of hesitant to bring him here,” she said of her older son. “But I also have to understand, you know, he also needs to go ahead and socialize.”

Despite crime in the downtown area gaining attention leading into the summer months, city leaders and community organizers through the coordination center are working to create safe spaces within neighborhoods most affected by violence.

Tamara Mahal, who leads the center, said the recent fatal shootings in Millennium Park and at a McDonald’s on the Near North Side emphasize the need to make communities safer and provide alternatives for city youths.

“Primarily what this has done is double down on the fact that the violence reduction strategies we’re implementing and I think importantly, that our community partners have been implementing are sorely needed,” Mahal said.

Since it launched in August, the center has been working with community organizers, with a goal to target neighborhoods that experience the most violence.

Last week , Mayor Lori Lightfoot and the center released a one-year assessment of the “Our City, Our Safety” violence reduction plan. The assessment provided violent-crime data between 2018 and 2021 and outlined how the CSCC’s work is addressing that violence through a public-health approach.

“As this report shows, treating violence like the public health crisis that it is allows us to better target its root causes,” Lightfoot said in a news release. “Thanks to the CSCC, we have also been able to build upon the pillars outlined in OCOS and take a whole-of-government approach to making our communities safer and mitigating the long-standing effects that violence has on community members.”

Rob Castañeda, executive director of Beyond the Ball and one of the CSCC’s community engagement managers, said it’s important to engage youths and all residents in the neighborhood around a more positive environment and to change the perception of the community.

“Right now we see a lot of kids going downtown, because they’re looking for something to do,” Castañeda said. “Because there’s nothing to do in the neighborhood.”

The center’s 2022 budget totaled a little more than $13 million, most from federal funding through the American Rescue Plan, public records show. Of that budget, $5.35 million was used for the center’s administration, community safety initiatives received $2.67 million in funding and $5 million went toward violence-intervention programming.

The city has staffed the center with program managers who listen to organizers’ needs and either connect them with resources or take care of issues that fall under the city’s responsibilities — such as fixing streetlights and cleaning vacant lots.

The CSCC provided the Little Village Violence Prevention Collaborative with $120,000 to help host more events over the summer, Castañeda said. The collaborative is led by Enlace and includes several Little Village organizations working to reduce violence.

The data the CSCC provided has helped organizers such as Castañeda expand locations for events to new places, where community members are reclaiming space.

“The goal isn’t, we don’t want kids to go downtown, Castañeda said. “But the goal is that kids should have options in their own community.”

He said the events are also an opportunity for organizations to engage kids and check on their well-being, and providing spaces where children can play is also a way to provide therapy through physical activity.

Research also shows having a diverse group of people in age and gender makes a space feel safer, Castañeda said.

“You’ll see kids sitting around who aren’t playing at all, because… they don’t feel safe yet,” Castañeda said. “And so, over time, you would like to see those kids going from just kind of sitting around to actively playing.”

Flores grew up in Little Village, and lives near her son’s middle school, a block from the McCormick event. She said her older boy sometimes plays in their backyard, but she doesn’t let him out to the front of their house because it’s not safe. When she leaves her home, she goes to her car through the garage, rarely going outside or socializing with her neighbors.

She said it was nice to be in her community and see a lot of her neighbors and local kids enjoying a warm evening.

“It does give you a little sense of safety in a way,” she said of the event. “But just in the back of my mind I keep looking over my shoulder.”

Epifanio Diaz, sports director with New Life Centers, ran around most of the event, ensuring volunteers at each station had enough tickets to give kids. He joked with many as his niece helped him watch his own kids.

The CSCC hosted a series of meetings with community organizers in December where they got feedback on what the city can do to support key organizations. And in late March and early April, the center hosted larger town halls across the city.

The town halls were held virtually on the West Side, then in-person on the South Side, on the Southwest Side on the North Side and two in the Harold Washington Library in the South Loop, one targeting the Loop, downtown and Chinatown areas and another targeting violence prevention for youth.

Some community members at the town halls said it was refreshing to see that the city cared about their communities. But others were skeptical of whether the new efforts would lead to any real change.

Margaret Murphy-Webb, who is on the city’s cultural arts council, said politicians often hold town halls and “throw” stats at people to try to stay in office.

“I hope it’s not smoke and mirrors,” she said.

Murphy-Webb, who is also a retired Chicago police officer, attended the South Side community town hall in late March. After the event, she said she plans to follow what city departments are implementing to reduce violence and needs to see the initiatives work, not just hear city leaders talk about them. She said most of the city’s resources go toward downtown, the Loop and Near North neighborhoods.

“What are you going to do this summer when they start shooting us up?” she said. “A large number of the police officers that are supposed to be in our neighborhoods are protecting the tourists because they’re protecting your money. That’s the reality of living in Chicago.”

Sebastian Honeycutt, 18, went to the youth town hall in early April, to learn about efforts to reduce violence. He’s a member of the Gary Comer Youth Advisory Board.

Honeycutt grew up in Englewood and now lives in Washington Park, between West Englewood and Gage Park. He and the people at his table talked about how building trust and having more engagement among community members would help keep kids safe.

Barian German, 20, who lives in the Austin neighborhood, was also at the youth town hall with the organization Root 2 Fruit.

“It’s just good to know it’s youth other than us that’s trying to also better their communities as well,” German said after the event.

Seeing Lightfoot and other city leaders talk about how they want to support community organizations showed German that people outside of Austin and people with the power to change things also care about his community, he said.

German said there is little mental health support in Austin but those services are needed to help people who have been affected by gun violence. He said he hopes city leaders continue to engage with youth.

“Actually take the time to listen to the youth because the youth is literally the future,” he said. “So I feel if we have more of a word or say-so in what’s being done then things will get better for everybody.”

Diaz said he was happy to see the city provide portable toilets and hand-washing stations for the event. He hopes the city will come back and finish patching up holes in the gravel parking lot.

Diaz said having Castañeda be his point person to help plan events rather than having to reach out to city workers directly has made the process easier.

“I know Rob’s intentions,” he said.

Acknowledging that there is distrust in city government, the coordination center reached out to funders and asked them to back community engagement positions, promising that they would have a seat at the table alongside the center’s staff. Those positions are being filled by trusted community members — such as Castañeda — who have been doing violence prevention work in the targeted communities, Mahal said.

“We thought this was really important because at the end of the day, every community is so unique,” Mahal said. “And if we really wanted to be honest and truthful about the hyperlocal and block by block approach, we were going to need people who understood that block.”

The community managers work out of the CSCC office in the Loop sometimes, though they most often work out in the communities they serve.

She said the center’s goal is to provide the resources they have to those communities as they work to reduce violence.

Staff members at the safety center spend their days on calls or out in communities talking to organizers, checking in with the community engagement managers and coordinating city services where they’re needed.

For some of them, the work is personal as much as it is a job.

Manny Whitfield, co-director of community engagement with CSCC focusing on the South Side, has lived most of his life in South Shore after moving around the city and the suburbs. Whitfield said he works to be a point of contact that’s close to the mayor, which many of his neighbors have never had before.

Yolanda Fields, executive director of the nonprofit organization Breakthrough, who has been working with the center, said it’s been good to have people who have been doing violence-prevention work finally at the table with city leaders who are concerned about the same issues.

“It finally is an acknowledgment, I think to all of us, that the city understands that our violence prevention and intervention efforts have to take place, you know, in a more holistic way,” Fields said.

“And that in order for that to be successful, we all have to do our part,” she said, “which means that there has to be regular opportunities to hear about not only what is happening in the areas but to strategize around ways that we might be able to leverage the resources to be effective in meeting the needs that our community has.”

The CSCC has given communities easier access to city resources, Fields said, and the center has also ensured that city departments are taking care of their responsibilities.

Fields worries that the influx of funding that has come from the city and from the American Rescue Plan will just as easily stop in future years. Funding comes and goes in waves, Fields said, and the decades of inequity and disinvestment in communities can’t be fixed because it requires longer-term and more consistent funding.

“Those inequities are not going to be resolved with, you know, three-year terms for funding,” she said. “There needs to be a long-term commitment to, whether we’re talking about violence or health or housing, all of the inequities that keep communities like Garfield apart from really being as sustainable as other communities in Chicago.”

“It’s the nature of the beast,” he said.